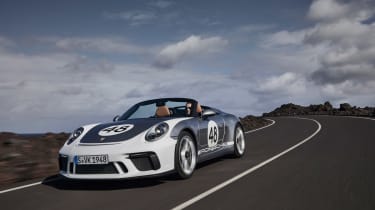 Following an appearance at the New York Auto Show and the debut of the road-going model last year, Porsche has now revealed UK pricing for the 911 Speedster. The new Speedster will signal the end of the current 991-generation while also celebrating the brand’s 70th birthday in one sleek special edition. Pricing will start from £211,599, but in typical Porsche style buyers will be able to personalise the Speedster to their own specification via the extensive, and expensive options list.

A total of 1948 units will be built, in homage to the original Porsche 356’s year of release, but unlike 911 Speedster models that have come before, this 991.2-generation version takes a decidedly more hardcore approach, now developed by Porsche Motorsport and incorporating a version of the GT3’s powertrain to create a more focused special edition.

The Speedster's basic body is derived from the rather more humble 991.2 Carrera 4 Cabriolet, but the windscreen is shorter and positioned at a more raked angle, with the side glass narrower to suit. Behind the front seats is a carbonfibre ‘double bubble’ panel which covers the roll-over structure and features a plexiglass wind deflector and Speedster badging. The wings and the bonnet are also made from carbonfibre composite. 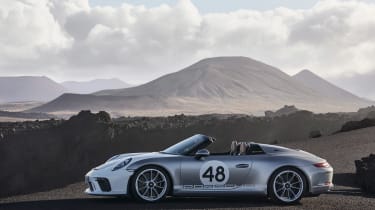 Unlike the original concept, the production 911 Speedster has a part-electric folding roof, with the car automatically unlatching the roof at its meeting point with the windscreen, and it's two holds on the side of the tonneau. The tonneau then lifts and the roof then slips below. It's only when raising that the driver needs to get involved, with the two fabric roof fins needing to be snapped into a locked position when the roof is back in its raised position.

The powertrain is made up from a 4-litre naturally aspirated flat-six derived from the current GT3, but to keep it regulated Porsche has applied a selection of small detail changes, including new exhaust particulate filters, to keep it Euro 6D compliant. Despite the emphasis on making the engine cleaner, Porsche has countered this with a revised fuel injection system and a new intake system, amongst other detail changes to add a further 9bhp to the GT3's power figure, now totalling 502bhp at 8400rpm. This engine is connected exclusively to a six-speed manual transmission.

If you were partial to the retro design of the original concept, Porsche will also offer a ‘Heritage Design Package’ to buyers, combining that car's distinctive silver-over-tan colour combination, and gold detailing elements. As a homage to the Speedsters that came before, this new model will rightly be the most extreme open-top Porsche 911 of this generation - a fitting celebration of its 70 years.