A prototype GT3, complete with rear wing, spoilers and splitter, has been spied on the streets near the Nordschleife 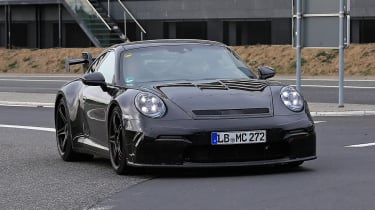 The basic version of the next-generation Porsche 911, the 992, hasn’t even been revealed, yet a prototype version of what appears to be the more hardcore GT3 model has already been spotted testing.

Still, we do have a good idea of how the 992 911 will look thanks to a steady stream of photos showing barely disguised cars hammering around the Nürburgring and driving on the streets near San Francisco. We know that it won’t look dramatically different from the 911s that have preceded it; there will be that familiar silhouette that stresses the car’s rear-engined layout and round front lights.

As exciting as a new version of the 911 is, the idea of a new GT3 is even more thrilling. Our favourite recent 911s have all been the Porsche Motorsport models, as they have exemplified what we love about cars and driving thanks to chassis that don’t sacrifice fun and involvement even in the pursuit of huge grip, and the fitment of high-revving naturally aspirated engines. 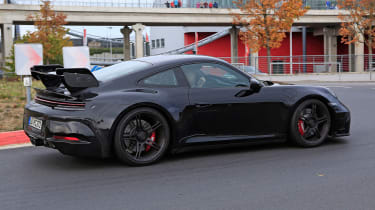 The GT3 has evolved dramatically from the first, 996-generation car of 1999. That was very much a 911 that had been honed to homologate the model for GT3 racing, whereas the most recent version, the 991.2, is much more like a genuine supercar in its own right. But still every iteration has had the ability to truly captivate those who love driving.

So it’s reassuring to see what could be a 992 GT3 prototype being tested at this early stage. The first images only hinted that it could be a Porsche Motorsport car under its rough disguise thanks to a set of familiar GT3 wheels fitted on the back axle, twin centre-exit exhaust pipes and, if you peeked inside, carbonfibre-backed bucket seats.

The more recent images look to be a far more finished car, but it’s still covered in blocky cladding, tape and now wearing plain wheels so that we can’t really tell what it will look like.

The central-exit exhaust pipes sticking out of the rear bumper have been a GT3 trademark since the 997 edition was revealed in 2006. Although the exhausts are no guarantee of exactly what engine will be found in the back of the next GT3, we are fairly confident the naturally aspirated 4-litre flat-six that powers the current GT3 and GT3 RS, or a slightly fettled version of it, will be used again.

Underneath the disguise, the latest prototype seems to have deeper bumpers and a more significant splitter than the regular 911s we’ve seen testing. It’s also sporting a front inlet in the luggage compartment lid and a large fixed rear wing – as you’d expect of a new GT3. However, the supports of the aero device are surrounded with large black plastic objects so we can’t see exactly what it looks like. 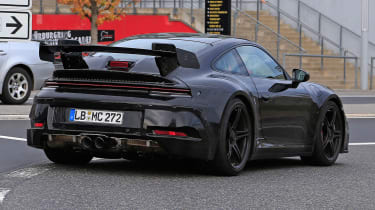 The disguise might only be there to hide the new wing’s appearance, or it could be to conceal some sort of active aero system. The cladding stretches up the supports and over onto the top plane of the wing, suggesting that the wing could be supported from the top, similar to Porsche’s 911 RSR race car (just on a much smaller scale). Or, it could be that the plastic is covering some sort of moveable mechanical element that allows the wing to fold flat to reduce drag or stand upright as an air brake. There’s even the possibility that Porsche could borrow some aero technology from Lamborghini (they are both part of the VW Group, remember) and the GT3’s wing could act like the Huracán Performante’s by using ducts and air to stall the wing when downforce isn’t needed.

As well as the elevated wing sprouting from the engine cover, there’s a more subtle spoiler that flicks up from the body just above the rear lights. While ahead of that are two big ducts, presumably where the engine draws in air. The spoiler, the wing and the intakes have created a problem for Porsche – where to put the central brake light? On this prototype it’s been stuck on between the intakes – let’s hope a neater solution is created for the production car.

It’s no secret that evo holds the 911 GT3 in very high esteem – its many victories in our own Car of the Year tests are testament to this. And as Porsche has continued to maintain that level of quality through every GT3 model so far, you’d put money on the 992 version continuing with this tradition of success.