Developed initially for Group B racing, by the time the production 959 was released in 1986, the racing class was banned. The 959 only experienced success in motorsport once, the Paris Dakar Rally of 1986, but it was the 959’s application of world-beating tech on the road that was its greatest asset.

Using a bespoke 959/50 engine, the 2850cc flat-six was adorned with twin sequential turbos to produce 444bhp and 369lb ft of torque. Thanks to the innovative all-wheel drive system 0-62mph was dealt with in 3.7sec, reaching a 196mph top speed, making it the fastest car in the world at the time. To reach these figures, Porsche’s engineers quickly came at odds with tradition, with a need for more aggressive cooling. As a result, Porsche engineers kept the block air-cooled, but water-cooled the heads.

> Click here for our icon review of the Porsche 959

But this was just the tip of a technological iceberg, as the 959 went on to inspire a generation of supercar technology and development. A total of 292 production units were built, spanning three model years. 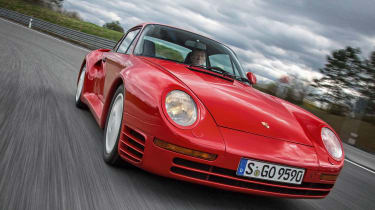