If the 959, or 993 Turbo brought controversy before, the 996 was about to shake up the status quo once again. All-new from the ground up, this was indeed the first 911 to feature a completely new body with a sleeker, distinctly 90s style. Alongside the new 911 was also the Boxster, an entry-level mid-engined roadster, which shared much of the 911’s body, interior and powertrains, but at a lower price point.

The 996 also brought with it the ‘fried-egg’ headlights, a look that was not received well, despite the 996’s commercial success. The 996 also introduced an all-new totally water-cooled 3387cc engine with the new M96 nomenclature.

The Turbo was also revitalised in the 996 generation this time featuring a Mezger designed twin-turbo 3.6-litre flat-six derived from the 993 GT1 race car. Like the 993 before, the 996 featured all-wheel drive, and a wider body with large external intakes feeding those two turbochargers. 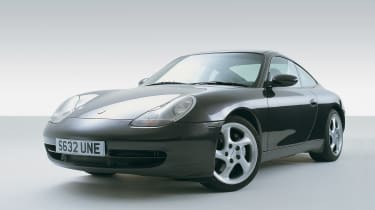 In addition to the Turbo, Porsche also revealed a new naturally aspirated performance flagship, the GT3. Revealed in 1999, the GT3 was not all about outright performance as the Turbo was, it was instead a track-bred lightweight variant, with a bespoke 354bhp 3598cc M96/77 engine developed by Hans Mezger, borrowed from the GT3 racer. Like the previous GT2 and GT1 models, the GT3 was also built as an homologation special to comply with FIA regulations.

In 2004, Porsche introduced the 996.2 update, using a revised M96/79 engine that produced 375bhp at 7400rpm in basic Carrera models. An even more extreme GT3 RS was introduced in 2004 with unique blue and red graphics over white paint, and a new rear wing with even more severe weight reducing elements.

Before that though Porsche revealed a new GT2 in 2003 aptly named the 'widowmaker', combining the Turbo’s engine and body with the track-focused elements borrowed from the GT3. Unlike the last GT2, this was not an homologation model, rather an exercise of creating the fastest road-going 911 ever. 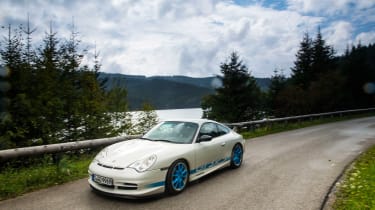 The 997 was a substantial update on the 996, but shared its underlying chassis and construction. The most obvious change was its reversion to round headlights after the 996’s all-in-one units. Available in Carrera and Carrera S in both rear- and all-wheel drive, the 997 set the template for future ‘basic’ 911s.

2006 saw a second generation GT3, this time with a 409bhp version of Mezger’s flat-six engine. An RS also saw production, again combining the same mechanical package as the standard GT3 with less weight and a new aero package. A new 991 Turbo was revealed in 2008 with new Borg Warner variable geometry turbos – a first for a road car – reducing lag and increasing performance to levels not seen on road-going 911s. Accelerating to 62mph from rest took just 3.9sec with the manual gearbox, and just 3.7sec with the five-speed automatic. 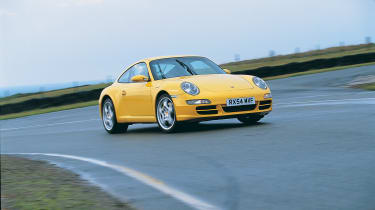 A new GT2 also arrived using the same concept as the previous model, but now produced 525bhp via the 3600cc M97/70S engine. This model was also rear-wheel drive, maintaining the ‘widowmaker’ name applied to the previous gen car thanks to its spiky handling and aggressive nature on the road. It was also the first 911 to break a 200mph top speed.

In 2009, the 997.2 model arrived, introducing an all-new direct injection 3614cc flat-six engine and a new seven-speed dual-clutch PDK gearbox, replacing the aged Tiptronic automatic. The 997.2 upgrades also applied to the 911’s derivatives, including the new Turbo and new Turbo S, but it was the GT3 that arguably finished off the 997’s model cycle with a bang. 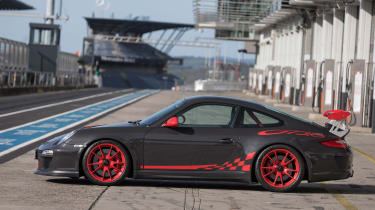 Keeping their Mezger engines – still borrowed from the GT3 Cup car – the 997.2 GT3 and GT3 RS featured 431bhp, combining it with the most wonderfully exploitable and engaging chassis. The GT3 RS also featured a wider front track and bespoke front wings to try and improve front-end grip. Finishing off the model line was the GT3 RS 4.0, complete with a 493bhp 4-litre engine called M97/74, and an extreme GT2 RS with 611bhp and a 205mph top speed.

Other end-of-line special editions also arose, such as the Sport Classic, a new Speedster to close off 997 production ahead of the all-new 991. 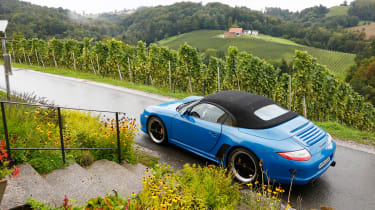