Post 959, Porsche suddenly had a glut of new technology that could be applied to mass-production 911s. To incorporate this, Porsche revealed the new Typ 964, 85 per cent new from the previous 3.2 Carrera with a new M64/01 3600cc engine developing 247bhp in base form.

The 964 also introduced all-wheel drive in most models, a new interior and an automatically extending rear spoiler. The Turbo model would also return in the 964 in 1991, with a bespoke wide-body and new realisation of the iconic ‘Whale Tail’ spoiler. In 1992 Porsche revealed the hardcore Carrera RS, combining the standard Carrera’s narrow body with the M64/04 3746cc naturally aspirated flat-six engine and a lighter, stripped out interior. 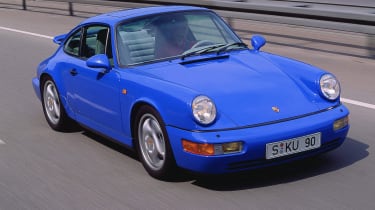 1994 brought the short-lived 964 model to an end, replacing it with the smoother, sleeker and significantly revised 993. The Carrera’s engine was only gently revised over its 964/05 form, but the 993 model proved to be more successful than the 964, selling in higher numbers.

The Turbo was also proving to be a popular model, now gaining all-wheel drive borrowed from the Carrera 4 to make the turbocharged flagship less of a handful at the limit. Later in the 993’s lifecycle, an even more powerful Turbo S model was released featuring a M64/60S twin-turbo 3600cc flat-six, with a 959-matching 444bhp and carbon ceramic brakes, a first for the 911. 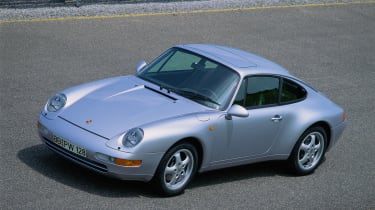 Competition also played a bigger role in the 993’s life, with Porsche needing to homologate for various racing series, leading to the first 911 GT2, a wide-bodied, rear-drive model running a racing-derived M64/83 engine with 424bhp in standard trim, and massive 592bhp in ‘EVO’ form.

The ultimate homologation special was also introduced in 1996, called the GT1. Designed to allow Porsche to compete in the GT1 class at Le Mans, a number of road-going models needed to be sold – a total of 21 units were built. Like the 959 before it, the M64/80 twin-turbo engine featured a water-cooled head, but maintained its air-cooled block. The 993 would in fact become the last air-cooled Porsche, as 1996 brought about the biggest step change in 911 history. 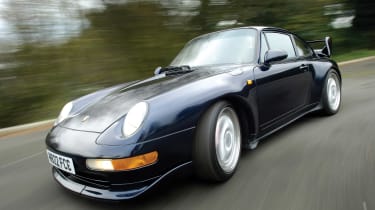