It was at the 1963 Frankfurt motor show that Porsche revealed its 356 successor, the 901. Or that’s what it had planned until a trademarking issue arose with Peugeot, who had the trademark of naming its cars with three numerals with a ‘0’ in the middle, making it impossible to sell the new model with the 901 nomenclature in France. For ease, Ferry Porsche, who had since taken the helm of Porsche after his father’s death back in 1952, decided to rename the car 911 as it didn’t require the design of a different numeral in the 901’s typeface. 82 units left the factory with the 901 badging before it was renamed in September 1964.

The 911 was initially designed as a more spacious and capable update on the 356 original. The same rear-engined layout was still in place, but instead of the air-cooled flat-four engine, Porsche fitted a larger 2-litre flat-six, in the process kicking off a mechanical lineage that feeds right through to the current 911. 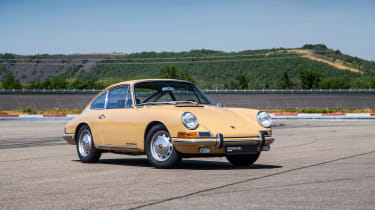 This flat-six was also air-cooled, and produced a scant 128bhp. The relatively tiny footprint was surprisingly space efficient though, with space for four (theoretically) and luggage due to the engine’s placement over the rear axle. 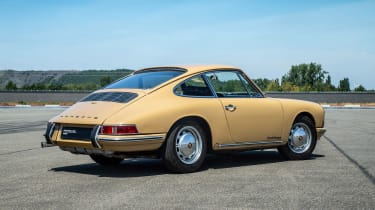 These 1967 model year 911s were also available with an optional Rally Kit, replacing the standard seats with a pair of Recaros, a roll bar, 100 litre fuel tank, adjustable Koni shock absorbers and various smaller engine and chassis upgrades. Porsche also removed the 911’s rear seats, interior trim and fitted a smaller steering wheel. An entry-level 911T was also introduced, designed primarily to drop base price of a six-cylinder 911 to under DM 20,000 in Germany.

1967 also saw the introduction of the iconic 911R, developed by Ferdinand Piëch’s (yes that Ferdinand Piëch) experimental development department within Porsche. The 911R had lightened glazing, thin glassfibre panels and a Mezger-designed 901/22 2-litre engine borrowed from the 906 Carrera 6 racecar. The 911R’s peak power was rated to 206bhp at a dizzying 8000rpm. 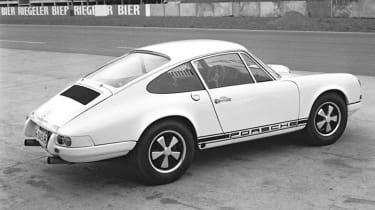 As the 1970s approached, Porsche had already been well underway developing the 911’s replacement, led by Piëch’s engineering team. In a change to the tried and tested layout, Piech’s initial designs were formulated around a newly-developed flat-eight engine, which was to be mounted between the axles, with a centrally mounted driver seat with two further situated behind (sound familiar?). Unfortunately, the Typ 1966, as it was known, never reached production, but that didn’t stop the 911 from being honed as it entered production in Porsche’s new Zuffenhausen manufacturing facility in 1970.

Struggling to deal with new emissions laws, Porsche upped the engine size from 1991cc to 2195cc. Power was increased in all models alongside this growth in engine capacity, with the 911S now topping the range with 178bhp. By 1972, Porsche introduced a new 2342cc Typ 911/53 engine for the flagship 911S, now rated at 187bhp at 6500rpm, which also featured fuel injection for the first time, along with aero revisions helping to keep the flighty front axle on the ground.

> Click here for our drive in a Porsche 911 Carrera RS 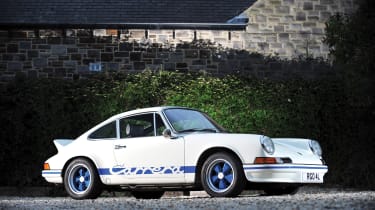 It was 1973 that saw the introduction of perhaps the most recognisable of these early 911s, the Carrera RS. Using a new 911/83 2687cc engine developed initially for competition by engineer Norbert Singer, this high performance track-focused 911 was due to adopt the 911S 2.7 nomenclature. The name was quickly dropped thanks to the marketing department though, eventually reaching production with the iconic Carrera RS badge, front splitter and ducktail rear spoiler. Available in both standard and ‘Touring’ versions, the Carrera RS’ ‘911/83’ flat-six produced 206bhp at 6300rpm.

In 1974, Porsche decided to simplify the 911 range, removing the entry-level 911T and 911E, replacing them with a single entry-level model featuring a larger 2678cc flat-six producing 148bhp, with the 911S sat above with 173bhp. Topping the range in Europe was also a 206bhp Carrera, a model that went unchanged in the 1974/75 model years.

These new models were given the G series label, and integrated the famous ‘impact bumpers’ that were needed to meet new US legislation insisting that all cars feature bumpers capable of hitting a barrier at 5mph without sustaining any damage. 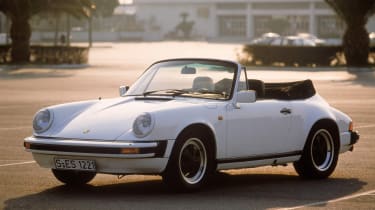 In 1975, the new H series arrived, but for models in Europe the previous models were unchanged, aside from one new flagship model. It was the first 911 Turbo, a model that would go on to form part of the 911 range right up until the present day. The Turbo featured the ‘930/50’-designation 2994cc turbocharged flat-six with 256bhp. Porsche quoted a zero to 62mph time of 5.5sec and a top speed of over 155mph.

Distinguished by its ‘whale tail’ rear spoiler, wider front and rear wheel arches and ‘Fuchs’ alloys, the Turbo models also picked up the 930 model designation, borrowed from the engine code. Famous for its hair-raising handling, the combination of 1970s turbo lag and that rear-engined handling balance gave the 930 Turbo quite a reputation. The Turbo reached the US in 1976. 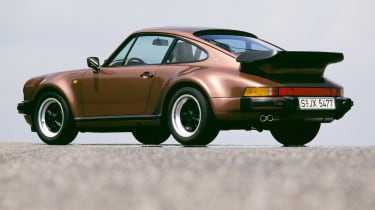 Five years after having planned to kill off the new 911, consistent customer demand kept the 911 in production, despite the release of an all-new GT model, which was meant to replace it.

So, for 1978, Porsche once again refreshed and realigned the models to leave space above for the new 928. The new 911 was called the 911SC, combining the historic S nomenclature with Carrera. Powered by a revised version of the 2994cc engine that powered previous Carreras, Porsche focused on improving mid-range torque, and re-tuning the engine to run smoothly on lower octane American fuel. Power was rated at 247bhp, only a few bhp down on the previous Turbo. As a result, the Turbo received its own suite of upgrades for the 1978-79 model years, using a new 930/60 motor, producing 296bhp in markets outside of the US. 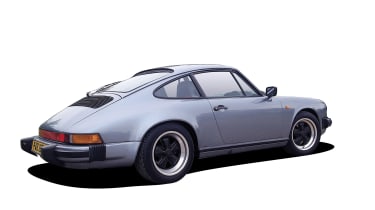 As the last of the truly original-bodied 911, there were plenty of special editions like the low-roof 911 Speedster and ‘Slant Nose’ 930S Turbo, but it all culminated in arguably the most forward thinking and innovative 911 derivative of the 20th century: the 959.