Porsche Cayenne Turbo 2018 review – behaves like no SUV should

It might not fit the usual performance car mould, but the Porsche Cayenne Turbo is a force to be reckoned with 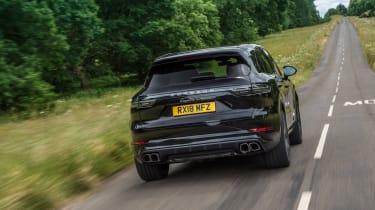 The world has had since 2003 to get used to the idea of the Porsche Cayenne Turbo, yet 15 years on and it still astounds. Whether it’s the challenging looks, absurd performance, incongruous hot-hatch-rivaling road manners, or that there’s a Porsche badge on the nose of such a vehicle, Porsche’s big performance SUV always causes controversy.

In the intervening years since its launch, the Cayenne’s appearance has become less provocative, but it’s still managed to maintain its shock value thanks to ever-implausible on-road agility, increasingly powerful engines and absurd performance figures. As you’d expect, the new 2018 model is no different – with 543bhp, a sub-4sec 0-62mph time and a plethora of performance enhancing gadgets (including active aero for pity’s sake) it follows the same trajectory set by its predecessors.

As a result, this Turbo covers the role of sports car, off-roader, family wagon and luxury GT better than any other Cayenne Turbo before it. Love it or loathe it, you can’t help but respect it. 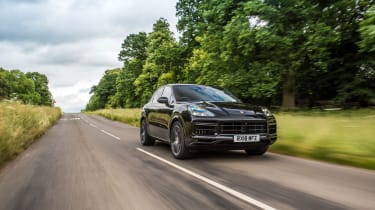 There are no great surprises in this area – either under the Cayenne’s bonnet or in the fact that it is very, very fast. As with the latest generation of Panamera, the new Cayenne Turbo receives the ‘down-sized’ twin-turbocharged hot-V 4-litre V8. It may be a more compact engine than the old 4.8-litre V8, but it’s also a more potent one, offering 543bhp and 568lb ft of torque (up from 513bhp/533lb ft in the outgoing car), the latter from as low as 1960rpm.

Unlike the Panamera, the Cayenne doesn’t have Porsche’s double-clutch transmission, PDK. Instead, it has an eight-speed torque converter automatic as it’s more suitable off road and its durability allows the Cayenne to tow up to 3.5 tonnes.

The more robust gearbox doesn’t stop the big Porsche’s accelerative abilities being anything other than shocking, as it sprints to 62mph from rest in just 3.9sec with the benefit of the Sport Chrono Package’s launch function. And this with a kerbweight of 2175kg, despite Porsche’s best efforts in cutting the flab. The top speed is quoted as 177mph, a speed at which the Cayenne must sound hugely intimidating as it punches a very large hole in the air. 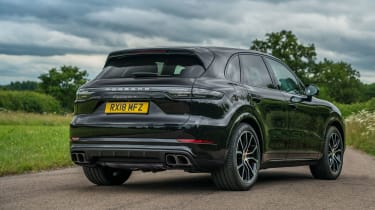 For the Cayenne Turbo to achieve what it sets out to do – to be competent off-road while also being devastatingly fast on it – it needs a vast amount of technology to keep its bulk under control.

Firstly, the Turbo gets the new three-chamber PASM air suspension as standard. It not only allows the Cayenne’s body to sit at six different ride-heights, it can choose to use whichever combination of the trio of air bags to change the spring rate. Overseeing the suspension’s activities, and a whole lot more, is the new 4D chassis control setup, which includes electromechanical variable anti-roll bars and rear-wheel steering – the same technology used on the Audi SQ7, the Bentley Bentayga and the Lamborghini Urus. As with its VW Group stablemates, these systems in the Cayenne Turbo run off an additional 48v electrical system – the lights and entertainment, amongst other things are powered by a conventional 12v system.

The Cayenne’s four-wheel drive system is of the ‘hang-on’ type with an electronically-controlled multi-plate clutch that can vary the torque between each axle. It’s further enhanced by PTV (Porsche Torque Vectoring); an electronically controlled limited slip differential on the rear axle.

Overall, it’s a considerable arsenal of technology, and all-in it adds a significant amount of weight to the Cayenne Turbo (it’s 155kg more than a V6-powered Cayenne S). But each item overcomes its weight to help the Turbo, that sits high up and weighs over two tonnes, to do things it shouldn’t really be capable of on tarmac.

Stopping, of course, is another significant challenge for a vehicle such as this, so Porsche has developed new 10-pot front calipers that are paired with 415mm discs coated with a special tungsten carbide outer layer. The new discs rival Porsche’s ceramic brakes in repeated use, maintaining a consistent pedal feel and stopping distances after many stops. They, however, are not as light as the optional PCCB carbon ceramics.

> Click here for our review of the Audi Q7

Aiding whichever brakes the Cayenne Turbo may be equipped with is an active rear spoiler positioned on the trailing edge of the boot. Not only does it change its angle depending on the car’s speed and which driving mode the car’s in, it also raises under braking to create drag and slow the Cayenne down. 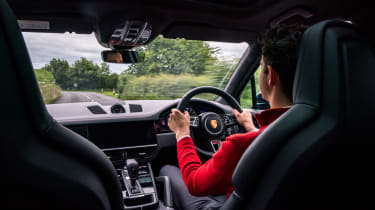 For those that dislike SUVs, the answer to this question will be something like ‘infuriatingly good’. Yes, the new Cayenne Turbo builds on the talents of its predecessors, but with some important new qualities for good measure.

Inside, it retains the relatively low-set driving position and high transmission tunnel that conspire to promote a ‘sports car on stilts’ feeling. With the same 12.3-inch HD touchscreen first seen on the new Panamera, along with HD digital screens either side of the big analogue tacho, the look is modern but relatively simple and clutter free. It also feels very well screwed together – as you might expect at the price, but not always a given with some rivals.

> Click here for our review of the BMW X5

Delve into the big screen’s functions and you’ll find five different driving modes: an on-road mode, with Sport and Sport+ options, plus the off-road modes of Gravel, Mud, Sand and Rocks. 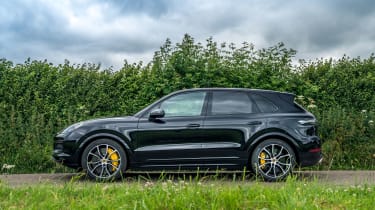 Once you’ve set off, the first thing you notice is what a refined, relaxing car it is to cover large distances in. Most of the time the V8 is little more than a deep murmur, effortlessly dragging the Cayenne forwards. But what’s most apparent is the abilities of the PDCC roll bars to slacken off when the car is cruising in a straight line, removing the sort of head toss that could blight a stiffly sprung high performance SUV over uneven road surfaces.

A few elements do frustrate, however, and they don’t fit with Porsche’s usual method of putting the driver first. In full manual mode, after you’ve shifted the gear selector to the left, the Cayenne still kicks down when you use full throttle. Oddly, though, Sport Response – when the car is instantly set to its most alert setting activated by a button in the middle of the mode dial – doesn’t force the car into a lower gear if it’s in manual mode. At least the gear selector is set to change gear in the correct way, you pull back to change up and push forward to change down; for many years a feature only reserved for Porsche’s GT models.

The bedrock of the Cayenne’s driver experience is its steering, which as usual is precise, consistent and well-weighted in a manner not usually associated with the type. Traction, unless provoked as we shall see, is absolute, and the Turbo simply stampedes down a road, undeflected by surface, gradient or anything else. 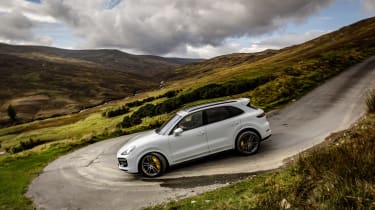 Very quickly the V8 goes from meek to mad, pulling with smooth but ferocious consistency and never feeling out of breath whatever the road or scenario. It’s just as well then that the carbon ceramic brakes are verging on heroic given what they have to deal with. The way it thrusts out of fast corners, even if your corner speed is already relatively high, is remarkable.

Try turning in to a sharper corner, then getting on the power early and what occurs feels alarming at first, and then very, very naughty. You can feel the drivetrain working, tearing away at the tarmac trying to force the Turbo around the tight corner. Not only does the chassis trickery succeed in rotating the big SUV, it’s so effective that it requires the driver to interject by either counter steering or modulating the throttle. The Turbo allows you to experience every last bit of its high-tech underpinnings, but still requires enough driver interaction to make the most of it all.

It’s a crazy party trick for such a vehicle, but it does also illustrate just how keen the Cayenne is to turn into a corner and hold its line, and used more sensitively, the combination of torque vectoring and rear-wheel steering makes this big hulk of a car feel surprisingly agile. 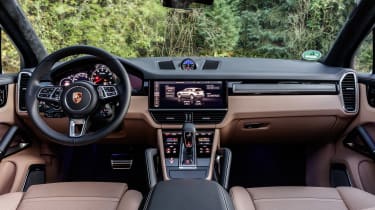 Nevertheless, physics are still physics, and while the Cayenne can pull a variety of magic tricks, ultimately it can’t disguise its weight and general make-up – in big compressions you feel every bit of the Cayenne’s heft. The Turbo can make stunningly good progress and its ability to do so in a comfortable, practical package is very appealing, but its ultimate driver enjoyment is more about shock and awe rather than the subtleties of driver interaction.

With their heavyweight kerb weights, power outputs and price tags, there’s some serious competition for the new Cayenne Turbo – cars like the 567bhp Range Rover SVR at £99,680, the similarly powerful BMW X5M at £94,910 and the even more potent 577bhp Mercedes AMG GLE 63 S at £101,885. Even so, the £99,291 Cayenne Turbo needn’t have any worries about justifying its price in that company. 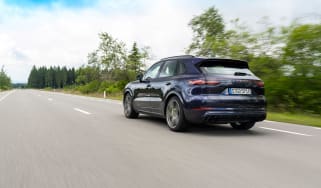