The latest Clio R.S.16 is just the latest in a line of extreme Renault Sport road cars - here's what made them significant 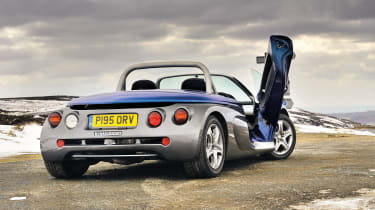 If you’ve not yet read Dan Prosser’s look at Renault Sport’s latest hot road car, the Clio R.S.16, then you’re missing out – with the engine and transmission from the Megane 275 Trophy-R and more aggressive chassis tuning, it’s sure to be the quickest model yet produced by Renault’s performance arm.

It’s also the latest in a short but attention-grabbing line of more extreme models by Renault Sport (now two words, since the firm’s rebranding earlier this year) that sit above more familiar cars like the Clio RS and hot, turbocharged Meganes.

The brand has existed since 1976, taking over operations from the old Alpine competition department and handling Renault’s rallying and Grand Prix exploits. It wasn’t until 1996 that the label was applied to a road car though, with launch of the striking Renault Sport Spider. 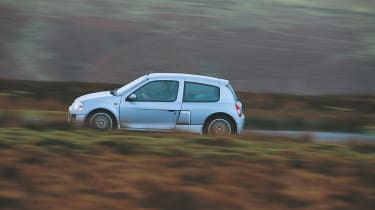 Unlike any road car Renault has produced since, the Spider was a true two-seat, open-topped sports car. Like similar cars of the era, its mechanicals were humble: a 2-litre, four-cylinder powerplant cribbed from the Renault Clio Williams (and the contemporary Megane Coupe 16v), which developed 148bhp and sat amidships.

With a kerb weight of 930kg this made for brisk performance, but while the Spider handled neatly and looked spectacular, it had the misfortune of launching alongside the Lotus Elise, which thrilled drivers even more.

Those who took the plunge with Renault still had plenty to enjoy though; driving the Spider again in evo 183, Henry Catchpole suggested its unassisted steering and brakes ‘still offer more feel and honest interaction than those of most other cars in existence’, with ‘the sort of immersive experience that so few cars dare to give you.’

Renault Sport’s next extreme road car didn’t quite share the Spider’s immersion, but it shared its engine location. The Clio V6 is every bit ‘the world’s smallest supercar’, our cover line way back in issue 007, and while the first-generation cars were built by TWR, development was down to Renault Sport. 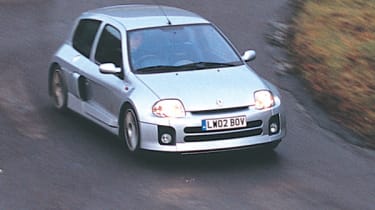 Like the Spider, the Clio V6 was designed as much for the race track as it was the road, and a thriving series accompanied the road car’s time in production. Both road and race cars were hindered somewhat in the usability stakes by a short wheelbase and lack of steering lock that made them – combined with that mid-mounted engine – particularly tricky on the limit.

When the Phase 2 was introduced (and built by Renault Sport itself in Dieppe) it improved not only in terms of power (the 3-litre Laguna-sourced V6 jumped from 227bhp to 252), but also friendliness.

‘We toyed with the idea of putting the engine in the rear, like the Clio V6’, Renault Sport managing director told Dan Prosser on his recent introduction to the very latest Renault Sport product. If nothing else, that seals the R.S.16’s position in the company’s hierarchy: It very much considers the latest Clio a car in the same vein as the Sport Spider and Clio V6.

But Renault Sport’s history of extreme cars is by no means limited to those three alone. Homologated for Renault Sport’s rallying exploits, the Clio V6’s spiritual forbear, the Renault 5 Turbo, is one of the French firm’s greatest ever cars and even more electric to drive than the V6. And in the realms of Clios, the 182 Trophy (with its remote-reservoir Sachs dampers) remains one of the greatest hot hatchbacks ever made. 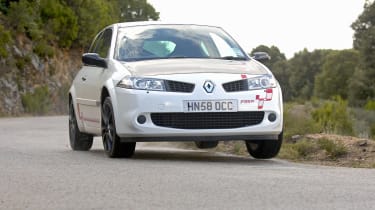 Then there’s the Megane R26.R. On-paper specification alone marks it out as something special (perhaps even more so than the latest Clio): A carbonfibre bonnet. Plastic rear windows that flex to the touch. Rear seats make way for a red-painted roll cage and the front seats are deep Sabelt-branded buckets.

Given customers could also specify a light-weight and deeply unsociable titanium exhaust it also has motorsport-style cred on its side, though it’s the absorbing driving experience we valued the most, both when new and when the R26.R appeared in our ‘This is evo’ test in issue 200.

If nothing else, that little collection suggests the latest Clio R.S.16 could be a very special car indeed.