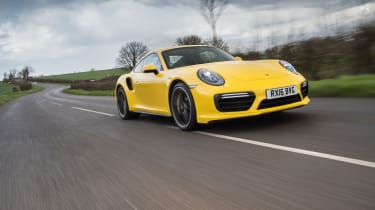 The mechanical revisions are all fairly minimal, so the car’s dynamic behaviour is very much as it was before the facelift. While you’re not aware of the dynamic boost function operating on road or track, you do appreciate the near lag-free throttle response, even from low engine speeds.

The rotary dial, meanwhile, is intuitive to use and the Sport Response button really does make passing slower traffic on the road child’s play. You’d need gyroscopic inner ears to identify the extra straight-line performance over the previous model, but as ever, the Turbo S thumps along on an enormous, effortless wave of torque. 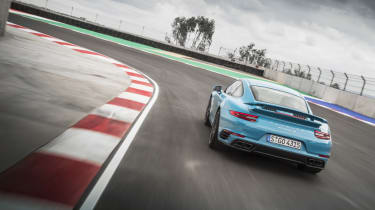 The smaller steering wheel is an improvement over the old item, which always felt ever so slightly too big in diameter for such a dynamically capable car. The Turbo S remains the definitive all-weather, point-to-point supercar, but as with the previous version you really do need to push very hard on the road before the chassis begins to come alive. The steering, meanwhile, is still very direct and crisp, without ever dripping in feel.

In the dry there seems like endless reserves of grip for the rear axle, unless you’re really trying to break traction. While, in the wet, a degree of caution needs to be applied. Generous amounts of throttle will make the car rotate with ease. The slightly looser calibration of the traction control in Sport Plus mode allows enough angle for you to trim your line while also keeping a safety net should you be too eager with the throttle.

Even with four-wheel drive, the 532bhp and 524lb ft figures of the Turbo suggest it’ll be scary and wild whenever the road is anything other than perfectly dry. This couldn’t be much further from the truth, though. The chassis is transparent enough to make the loss of traction from the rear predictable and controllable. The engine is noticeably turbocharged, but there’s always control 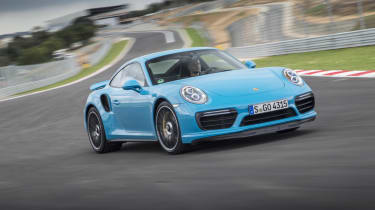 With all the traction aids turned off, there’s still the four-wheel drive system to help you regain grip. The front axle really interjects to straighten the car during a slide. It might not be as fool proof as keeping the traction control on, and it certainly requires you to be alert, but it’s manageable

The increased adjustability of the Turbo in the wet adds a significant amount of fun that’s lacking in the dry. It might not be able to match the blistering, no nonsense pace it has in the dry, that’s not to say it isn’t still incredibly fast when wet, but the payoff is being able to enjoy the cars performance more.

On circuit there is some understeer in the chassis – more so than a Carrera 4, in fact – but it’s easy enough to dial that out by trail braking or using the mass behind the rear axle to get the car rotating on the way into a corner.

Four-wheel drive systems usually enable you to reapply power very early in corners, but with the Turbo S that isn’t quite the case. Because of the very light front end and the incredibly grippy rear axle, you actually need to have the car pointed more or less in a straight line before you stand on the accelerator, otherwise the front end will wash out.

With the stability system removed entirely, meanwhile, the Turbo S can be teased into extraordinary angles of oversteer both on the way into a corner and under power on the way out – without any of the snappiness that you might expect of a 200mph supercar.