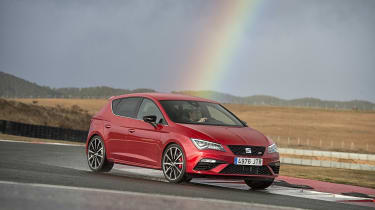 The Supertest in evo 241 pitched the SEAT SC Cupra 300 up against its rather more showy rivals from Honda and Ford in the form of the Type-R and the Focus RS. In isolation the SEAT Cupra 300 has all the trimmings required – hot engine and tweaked chassis – to be part of the hot-hatch hierarchy but it looks rather dowdy in this company.

The SEAT’s EA888 engine is a real firecracker but its dampers, limited-slip diff and traction control struggle to utilise all of the engine’s power making the SEAT an unruly companion at times. It can be exhilarating for short periods but tiring after a long stretch.

Tipping the scales at just 1347kg the SEAT’s a useful 65kg lighter than the Type-R and a huge 220kg less portly than the chubby Focus RS. It has the lowest power output at 296bhp but its featherweight nature means power-to-weight ratios are virtually identical. 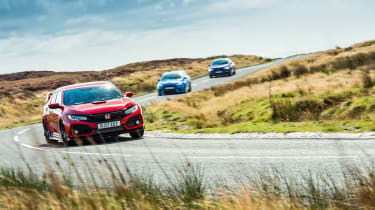 The Cupra’s very hard to get off the line cleanly during our acceleration tests though with the traction control struggling to keep up and it records a best of 6.2sec to 60mph, 0.4sec off its claimed time and 0.3sec behind the Honda and trails the Focus by a huge 1.3sec. Once hooked up though it is very quick and posted the fastest 0-130mph time of the three.

Given the SEAT’s light weight we expected it to do well around Bedford’s West Circuit and in some areas it was usefully rapid but in the final analysis it came third with a lap time 0.9sec off the Focus RS and 1.6sec behind the Civic Type-R.

Its strong engine and acceleration at high speed meant it was quick through the Palmer curves but where a faster change of direction was needed – such as at the tighter Hanger Hairpin – its lack of front end bite and tendency to understeer hampered its progress.