Are these the best mid-engined Ferraris?

A selection of mid-engined favourites 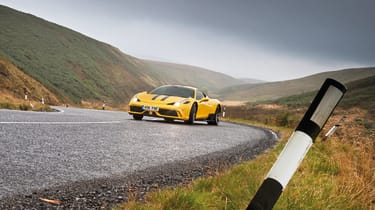 Picking favourite Ferraris is a little like picking your favourite child. It is a difficult and ultimately fruitless process that will overlook the merits of those you don’t choose and upset a few people along the way.

And yet, when you boil down to those that satisfy as driving machines rather than characterful classics or aesthetic ornaments, some do start to rise above others. Certain cars in particular have stood out since evo first hit the shelves; others we’ve rediscovered since. If you’re ever presented with the opportunity to drive just five mid-engined cars, these would be a good place to start.

Anyone who has followed evo long enough to become familiar with evo Car of the Year will know just how competitive these annual events are now becoming. The quality of participants gets higher virtually every year, and in 2014’s event there was a little of almost everything, from the Porsche Cayman GTS to the Golf R, Renault Sport’s Megane Trophy-R to the McLaren 650S, and the Ferrari 458 Speciale. 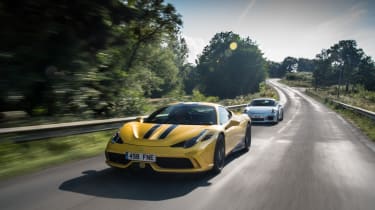 And despite that competition - where outright speed matters less than the way a car makes you feel - the Ferrari emerged victorious. It’s quite simply a defining car for the marque, a swansong for the brand’s naturally-aspirated V8 engine, a truly great chassis and terrifically exploitable. The modern 488 might be a fantastic car - it is a fantastic car - but after the Speciale, it’ll never seem quite as… well, special.

Once maligned for its unusual styling and compromised in following the legendary F40, the Ferrari F50 is finally starting to gain appreciation for what it is: One of the best analogue driver’s cars ever created. 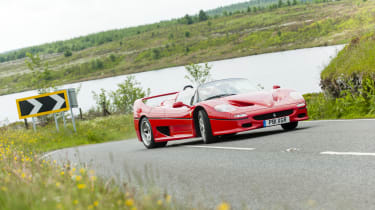 The test that sticks in the mind of most was evo’s comparison of four generations of Ferrari flagships, from the beautiful 288 GTO through the thundering F40, to the wailing V12s of F50 and Enzo. All shone, but the F50 shone brightest with beautiful balance and the incredible (and never-to-be-repeated) combination of a 4.7-litre, naturally-aspirated V12 and a gated manual gearbox. The combination was also enough to secure it a place in our ‘analogue supercars’ test a handful of years later.

From a truly analogue car, to one that uses technology to elevate it to a level few other cars can reach. No, the 488 doesn’t have the character of the 458 Speciale, but it remains sublime to drive, its turbocharged V8 punches with incomparable force and thanks to Ferrari’s wondrous grip of race-inspired traction control systems, there has never been a friendlier 661bhp car on the limit. 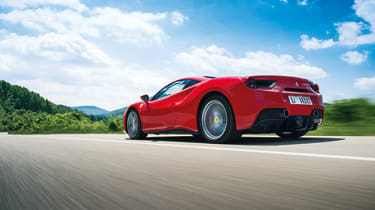 It’s easy to bemoan this technological march as diminishing the driver’s role, but when the 488 is in that sweet spot you wonder whether that criticism is deserved. It is involving and addictively fast, while being more usable day-to-day than any mid-engined Ferrari before it.

Turbocharging makes the latest 488 staggeringly fast. It makes the F40 terrifyingly exciting - particularly at the point the 2.9-litre twin-turbocharged V8 hits boost (around 4000rpm), lighting up the rear tyres and spinning to the red line in a way that makes you fear for both your own safety and the rev-counter needle’s longevity. 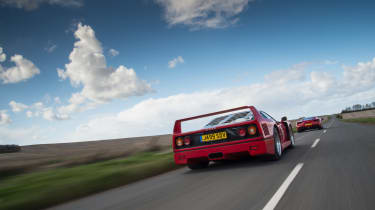 Like the F50, the F40’s engine defines its driving experience. And while the older car’s chassis can’t quite match that of its successor, it gets our nod for aesthetics - brash, belligerent and purposeful, few road cars have ever looked quite as much like refugees from the race track.

When evo first laid eyes on the Enzo it described the car as "an alien craft visiting planet earth. In the cold light of day, it's nothing short of devastating".

Clearly then, at the time of launch it wanted nothing for visual impact. Nor did it want anything for mechanical prowess, as the Enzo was at the absolute cutting-edge of road cars when it was unveiled. 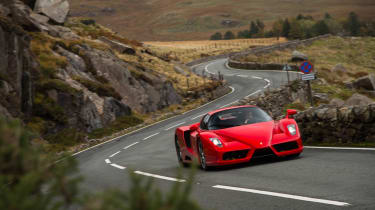 It combined class-leading aerodynamics with a 650bhp 6-litre naturally aspirated V12. The Enzo set the ergonomic standard for modern Ferraris to follow, with its steering wheel mounted controls and paddle shifters mounted on the steering column. It remains a true classic and one of the all time great mid-engine Ferraris.