As any good hot hatch should be, the new Corsa VXR is a great deal of fun and alarmingly quick down a twisty road. It’s expressive, adjustable both on and off-throttle and very easy to read, which makes it a car that the driver can immediately grab by the scruff, hang it over the edge of its abilities and hold it there for mile after mile.

Though they’re arch rivals, the VXR’s personality differs significantly from the Ford Fiesta ST. The VXR has better pace and grip, but the ST’s superb damping quality ensures it remains a serious contender and our hot hatch of choice - though Vauxhall's effort should be applauded.

The original Corsa VXR sold in strong numbers in the UK – around 9000 units over eight years – and won many fans for its pugnacious styling and aggressive driving style, but critical acclaim wasn’t so forthcoming. The Nurburgring and Clubsport limited edition models – fitted with mechanical LSDs and uprated suspension components – were improvements, but the title of 'best in class' still eluded the Corsa VXR.

If this latest model is to challenge the likes of the Ford Fiesta ST and Peugeot 208 GTi 30th Anniversary for class honours, it’ll have to retain the original’s sense of fun, but team that with a more sophisticated driving style, better damping, keener steering and a much higher quality cabin.

The non-Performance Pack Corsa VXR is still a capable small hot hatch, but stripped of the LSD, bigger brakes and the firmer suspension tune it’s frustrating at the point where the Performance Pack model really comes alive. It's £2400 very well spent. 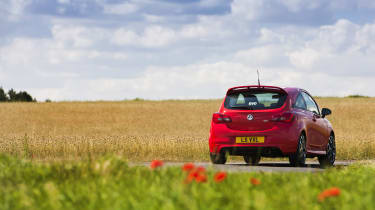 > Engine and gearbox - Despite the fitment of a turbocharger, the VXR's 1.6-litre four-cylinder responds well to revs. Both components represent an improvement over the previous model. Read more about the Corsa VXR's engine here.

> Ride and handling - The new car moves the game on from the previous, with strong mid-corner grip and impressive traction when the optional LSD is fitted. Read more about the Corsa VXR's ride and handling here.

> MPG and running costs - Optimistic claimed mpg figures and the car's H tax band ranking ensure the Corsa is far from cheap to run. But amongst its class competitors, the figures are respectable. Read more about the Corsa VXR's running costs here.

> Prices, specs and rivals - Rivals like the Ford Fiesta ST undercut the Corsa in base spec, but the VXR's generous standard kit means it's amongst the best for value for money. Read more about the Corsa VXR's pricing here.

> Interior and tech - Recaro buckets and sporty trim confirm the VXR's performance intentions. Lots of standard tech and media integration make it a nice place to sit, too. Read more about the Corsa VXR's interior here.

> Design - An example of evolution rather than revolution, the new VXR sharpens up the old car's looks. Read more about the Corsa VXR's design here.