evo photographer Aston Parrott spent over six months with the Stelvio Quadrifoglio, and enjoyed the combination of versatility and performance it offered 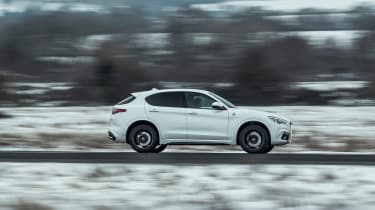 I knew the day would eventually come, but it didn’t make the Stelvio’s departure any easier. I wasn’t entirely sure what to expect when I was first handed the key, but now the Alfa has gone I’m really missing the versatility of an SUV with 503bhp.

The last SUV I ran was a Nissan Juke Nismo RS, and the first time I turned up to a photoshoot with it, Dickie Meaden and Jethro Bovingdon instantly burst out laughing. This was not the case with the Alfa Romeo Stelvio Quadrifoglio. This time the responses were more along the lines of: ‘Is that your new long-termer? Nice work. They’re meant to be good...’ Over my eight months with it, that praise would start to look like an understatement.

So the Alfa had the nod of approval, and why wouldn’t it? It had plenty going for it, with a powerful V6 engine, a great-sounding exhaust note, carbonfibre Sparco seats (a £3250 option) and beautifully designed wheels. And best of all it was an Alfa Romeo.

Almost the only thing counting against it was the fact that it was also an SUV. Yet while on paper it had rivals in terms of performance and price (£69,500 basic, £78,945 with options for our car), it proved to be far more interesting to be in and drive than the majority of its rivals. It certainly received more looks and attention than other SUVs. OK, maybe not more than a Lamborghini Urus, but the last time I was in one of those it received the kind of reactions you don’t want. But there were no such problems with the Alfa, which traded brash for beautiful. Well, beautiful for an SUV at any rate. 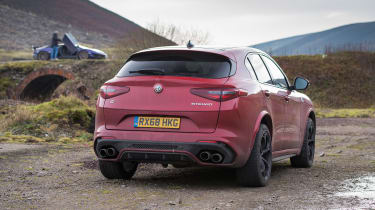 I had so many great drives in the Stelvio, but one that particularly sticks in my mind was during issue 252’s supercar test, featuring the 488 Pista, 911 GT3 RS, 720S Track Pack and Aventador SVJ. I loved the fact that, despite the abilities of the test cars the Stelvio was mixing with, I wasn’t completely left behind as we moved between photo locations. This was particularly impressive when you consider that I also had a bootful of camera, lighting and rigging gear, plus cleaning kits, my travel bag... and a stepladder.

The roads on that Scottish shoot were brilliant and gave me a chance to explore the Stelvio’s abilities – and it really could be hustled, although ultimately allowances still had to be made for its weight and height. Not that driving an SUV didn’t have its advantages, as was brought home to me upon finding the road ahead flooded when driving home one evening. 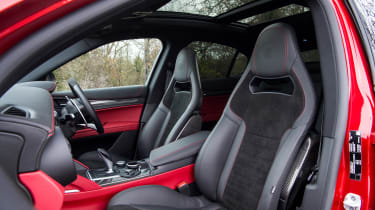 When it came to reliability, this Alfa proved very good, with only two small issues. One was when the performance turned sluggish and access to the sports driving modes was denied. This problem vanished after the next refill, so we suspect a bad batch of 95-octane fuel may have been to blame. The second issue was a flat battery after the car was left unlocked for several days by an airport parking firm. Once jump-started, the car went into ‘limp home’ mode for a couple of hours until the battery was recharged, then all returned to normal.

Despite its impressive performance, direct steering and strong brakes, jumping back into the Stelvio after a stint in my 993 Carrera I felt like I was driving a lorry. It was a reminder of what you miss out on when you opt for a performance SUV rather than a more conventional performance car, but it is to Alfa’s credit that even though I was sitting up high, I was still held firmly in place by those excellent seats. Actually, I liked everything Alfa has done for the driver inside the Quadrifoglio. The general design was very clean, but with a sporty edge thanks to the combination of carbon, Alcantara  and red leather. The steering wheel had a lovely feel to it and the instrument dials fitted perfectly within its curve. And the upgraded Harman Kardon sound system (£950) was always appreciated on long journeys. The only thing I would like to have seen was a smart touchscreen, as I mostly use Apple CarPlay and the set-up as it was was a little clumsy to use. But all good things must come to an end, and our Alfa Stelvio Quadrifoglio was very good indeed.