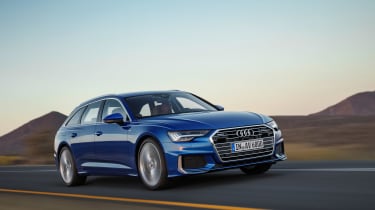 It seems like barely a week goes by without a new Audi model, and the latest is this, the new Audi A6 Avant. Powered initially by a range of petrol and diesel V6s, Audi’s latest wagon goes on sale in the UK in the summer.

Like the recently-revealed A6 saloon, the new Avant is notable also for including some of the technology of its larger stablemates, the A7 and A8, including 48-volt mild-hybrid drive and inside, a pair of touchscreens featuring haptic feedback.

The latest car has grown compared to its predecessor at 10mm longer, 20mm wider and 6mm taller, but the new dimensions are offset by a longer wheelbase that allows for shorter overhangs and improved cabin space. 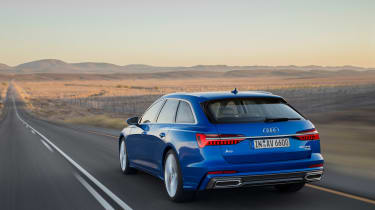 Styling is very much like Audi’s other models, the firm’s “singleframe” grille growing ever larger and flanked by intricately-detailed headlights. There’s a similar effect to the rear lamps and like the saloon, a chrome strip running between the lights, while the car’s flanks feature design details above the arches aimed at highlighting the car’s Quattro drivetrain.

Overall, it probably has the edge over the saloon in terms of styling, and while there are some fussy elements, it’s probably a more handsome car than its closest rivals, too – the BMW 5-series Touring and Mercedes-Benz E-class Estate.

The interior echoes other recent large Audis, most notably in using a two-level touchscreen system for the car’s infotainment functions. The screens deliver haptic feedback when using their functions – which include smartphone-style pinching and swiping movements, as well as convincingly replicating the feel of pressing actual buttons.

Virtual Cockpit makes an appearance in the instrument binnacle (surely not far from being a standard feature in all future Audis) while at the other end of the cabin, the A6 Avant matches its predecessor’s luggage volume with 565 litres of space seats-up and 1680 litres with the seats folded.

There’s a familiar range of engines, beginning with the 282bhp, 3-litre V6 TDI (badged “50 TDI” – something we’re still struggling to fathom) and the 55 TFSI, a 3-litre, 335bhp V6 petrol. Both feature all-wheel drive and automatic transmissions, and both use Audi’s 48-volt mild hybrid technology. 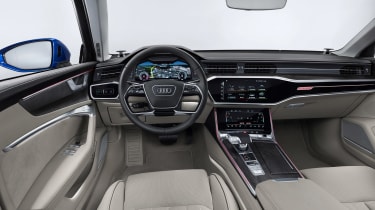 A 2-litre, 201bhp TDI will be along later down the line, as will the one we’re really waiting for – the RS6. Depending on trim level and options selected, there’s a choice of four suspension setups – steel springs, springs with adaptive dampers, sports suspension, and an air suspension setup (which may be one to avoid if our experience with the A7’s jittery ride quality on air suspension is any indication).

Options will include a sports differential and dynamic all-wheel steering – another hit-and-miss option but one that does cut the Avant’s turning circle by a full metre. Full prices are yet to be announced, but the A6 Avant should start at around £40,000.