Audi claims identical acceleration times for the RS6 Avant and R8, but which is really the fastest? 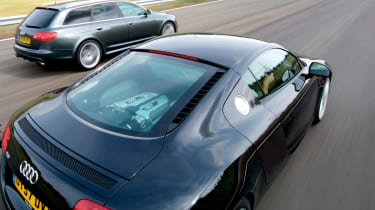 The view down the mile straight as you stand on the tarmac is distorted by heat haze. It’s still early, so track temperature isn’t the cause. Look again and at the centre of this shimmering scene there’s the rapidly shrinking rump of a fast-moving vehicle – one that’s rather taller and blockier than we’re accustomed to here. There’s noise, too. Not a V8 roar, but a flatter sound. Let’s call it a persistent bellow. The Audi RS6 has landed in the UK and it’s monstering Millbrook. Best keep out of its way.

We’re here to answer a simple question: which is the fastest Audi on sale today, this five-seat, two-ton estate running on a surfeit of steroids, or the scalpel-sharp, mid-engined sports car that is the R8? Audi claims that they post identical 0-62mph and 0-124mph times, namely 4.6sec and 14.9sec respectively, but is this really the case? And are the two cars just as closely matched in all the other performance disciplines? That’s what we want to find out.

But, even in this test, speed isn’t everything. So we’ll be driving RS6 and R8 back-to-back on some decent B-roads to find out how they deliver in the real world too.

The first round, in the unreal world, has already been completed: yesterday we padded down to Thorney Motorsport’s rolling road in Milton Keynes. Padding is something the R8 does rather well, too. Smeared close to the tarmac and painted a stealthy, menacing black (the shade is even called Phantom Black), it slides and glides with panache.

Pity, then, that it failed to reach its promised potential on the dyno, being all out of puff at 400.5bhp against a claim of 414. However, Chris Thorney pointed out that most cars can only be considered fully run-in once they have 15,000 miles on the odo, and our R8 was just 5000 miles old, which might explain the shortfall.

This wasn’t good news for the RS6 either: Harry’s new long-termer had covered just 1800 miles when it was strapped down. Even so, it ought to have bettered 486.4bhp – well down on the claimed 572. It would have done too, were it not for the big Audi’s automatic gearbox being confused by the rollers beneath the car’s wheels and insisting on always throwing in an upshift before peak power arrived.

Never mind. With the first round declared null and void, we agree to reconvene at the Millbrook Proving Ground next morning for the serious business.

THE RS6 HAS GIVEN ITS ALL. Finally at rest, that heat haze isn’t being generated by a single source, it’s rising from the engine, brakes, tyres, exhaust – pretty much everywhere in fact. But it has every right to take a breather considering the figures that have just spilled out of our VBOX.

If any car tops 150mph on the mile straight, it’s in the premier league of performance cars. The RS6 nailed 160mph. And yes, it is meant to be restricted to 155, but it seems the limiter turns a blind eye for a little longer…

It’s the way it achieves such speed that’s really impressive, though. Select sport or manual mode for the six-speed auto (it doesn’t matter which because it always changes up at the red line), feel the brakes creak as you build up the power, then release. There’s no drama or wheelspin, the RS6 just steps smartly off the line and its bi-turbo V10 goes to work, hurling you forward. There’s little turbo whistle, just a distant, woofly rumble that barely varies its pitch or tone with the rate of acceleration. Blame the long gearing for that.

This is not a normal Audi turbocharged unit, where all the torque is spoon-fed to you from tickover. The figures may suggest otherwise, but while meaty momentum is available from 1500rpm, it’s nothing compared to what happens once you’re past 4500. It’s there that the RS6 really gets a stroll on, making mincemeat of its 2025kg kerb weight – and the R8.

Not that the sleeker of this pair could ever be considered slow, and to be fair the R8 feels the faster. With snappier gearing, a better noise and a sharper throttle response, it really draws you into the thick of the action.

The mile straight forms a vanishing point again. Dial up 6000rpm, side-step the clutch and wince as 400bhp is instantly loaded on to all four wheels. The R8 takes flight instantly. No lag, just wheelspin and then second gear. This gearing really is far shorter than the RS6’s, hence the quicker in-gear times (see table, p140). The open-gate gearshift is a challenge, particularly when changing from second to third, but it’s worth the effort, really and truly.

Sixty is gone in 4.1sec – two tenths faster than the RS6 managed and a whopping half-second quicker than Audi’s 0-62mph claim for both cars. One more shift and the ton is done at 9.9sec, now two tenths behind the RS6. And it’s from here that the bigger Audi really hits its stride, covering 100-150mph nearly two seconds faster than the R8. Designed for life on the autobahn, obviously.

The RS6’s stoppers are more than up to the task. There’s less bite and progression than found in the R8, but they’re certainly effective. So much so that the Pirelli P Zeros beg for mercy first. Every time we hit the anchors at 100mph, the RS6 daubs Millbrook with a 300-foot-long set of number 11s. Amusing, but hardly likely to endear me to the boss…

AND SO TO BEDFORD. Trouble is, to get to the Autodrome you have to negotiate the town itself, a major traffic thorn in the side of our Audi procession. Following in the RS6, I can observe the R8’s ability to startle and seduce the public. And while everyone gapes at the R8, there’s no chance the RS6 will pass unnoticed either, especially not while it’s showing the effects of its Millbrook exertions – squeaky brakes, cooling fan almost drowning the V10.

Once we break loose from the one-way system’s stranglehold we get a chance to uncork the cars again. The R8 is magic on pretty much any road, but there’s a particular sequence of sweepers that highlights its compelling personality perfectly. They’re not easy corners, but the way the R8 lines each one up, scythes into it and pours itself out the other side is really something special. The steering isn’t quite as sharp as the chassis, but the R8 communicates in such a pure way. It always feels mid-engined, but is never intimidating. It rides so agreeably, too.

Along the same stretch of road the RS6 is a completely different beast. Less flow here, more desire to pummel the road into submission there. It grips hard for sure, and has a secure chassis and tremendous traction, but it never fully manages to hide its weight. Brake a fraction late and you’re suddenly aware of the considerable masses involved.

It’s still a deeply impressive performer, though. Smoother than an M5 Touring and in its own way just as satisfying to drive – I particularly like the fact the torque converter locks up so early, giving you maximum manual control over the gearbox. Yet the RS6 doesn’t have the tactility that made the RS4 such a special machine, and its three-mode electrically adjustable dampers aren’t as capable as the R8’s (optional) Magnetic Ride system. Thankfully the West Circuit is perfectly smooth…

Balls-out laps don’t suit the RS6, but it copes well. It resists understeer manfully into all the corners – so much so that it’s the tail that often starts to get mobile on turn-in. Roger Green is behind in the R8, capturing the action on video, and when we return to the pits after three hot laps, he’s nearly in hysterics: once again the RS6 has been leaving great rubber streaks – into, through and out of every bend. Nevertheless, a lap time of 1:27.9 isn’t too shabby, edging it ahead of the Boxster RS60 we tested last month.

Time is short, so it’s straight into the R8. Friendly though it is, it takes a while to adapt. Every reaction is far more immediate, the manual box takes concentration and precision, it’s a natural oversteerer and the mid-engined layout means a finer line between drift and spin. I can’t get the very best out of it in my allotted three laps, but it already has the RS6 soundly beaten, posting a time 1.4sec faster. If we had the track for longer I’m sure that gap could be extended further still.

IT GOES WITHOUT SAYING that this is not a straight-choice twin test. You’re more likely to have both in your garage than to be considering one or the other. There’s no doubt which Audi has the more rounded range of talents. The RS6’s amusement value is in the fact that the family can come along for the ride and enjoy not just the speed but the whole Q-car factor.On the other hand, although it’s an impressive engineering statement, this is not the Audi you’ve always promised yourself. It’s a car you’ll have in your garage as part of a collection; the daily runaround, if you’re very lucky.

The R8 is different. It’s a car you yearn to own, not because it’s easy to live with (though it is) but because it’s so richly satisfying to drive. But the fastest Audi? If we’re talking serious acceleration, that honour belongs to an estate…