Audi may make supercars these days but, true to tradition, its most powerful engine can for now only be found in an estate: the RS6 Avant 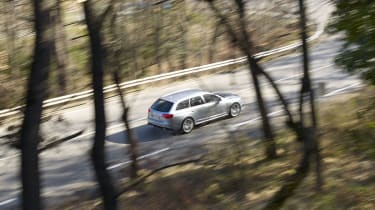 We’re on a narrow thread of French N-road, sun whiting-out against a surface that has been baked and re-baked until it’s smooth and slippery. The RS6 barely gets out of second gear, the revs zinging between 3000 and 5500rpm (there’s still another 1250rpm to play with), and it feels immense, like a force of nature contained and packaged in a humdrum estate-car shape, the box ’arches a clue to the pent-up energy trying to burst into the open. This is a road that should trip up the heavy (2025kg) and heavily front-engined RS6, but it just sucks it up like a string of spaghetti.

That a car with 572bhp, an all-wheel-drive system split 40:60 front-to-rear and gargantuan 275/35 ZR20 Pirelli P Zeros is fast across the ground isn’t exactly a great shock. But that a car weighing over two tons can carry so much speed with such composure, without the suspension ever crashing into its bumpstops, is borderline remarkable. Perhaps more remarkable still is that I’m driving a car capable of so much and yet so far I’m almost completely unmoved: no goosebumps, no childish whooping (embarrassingly I do tend to do this when driving something really special). I’m impressed, maybe even awestruck when I can touch the violence of the V10’s top-end power, but I’m not really excited.

Somehow the RS6 and I haven’t clicked, and to be honest I’m not sure why. It is a markedly better car than the old twin-turbo V8 RS6, which would deliver huge splurges of torque with little precision and offer lots of grip but display little finesse, its chassis simply steamrollering a road rather than moving lightly above it. The new car – heavier, more powerful still and bigger in every dimension – isn’t like that at all. Its engine is simply wonderful, almost absurdly powerful and with a progressive, almost normally aspirated feel to its epic delivery. The six-speed automatic gearbox works brilliantly, gently distributing all that torque at low speeds, yet punchy and responsive when you start to use the paddles behind the steering wheel. And this RS6’s balance is more neutral – it feels like there’s much more to its repertoire than just progressively more severe understeer. By any measure it’s a mighty car: ballistic and yet possessed of the most polished manners.

So what’s going on? Why the rock-steady pulse? Maybe the RS6 is a victim of its own shocking spec sheet. When you approach a car with nearly 600bhp you expect it to dry your throat and wet the palms of your hands. The RS6 doesn’t do this. It’s an Audi, remember, and that means control, unimpeachable traction and a product brilliantly resolved for everyday use. So maybe it’s that. The RS6 is just too secure, too effortlessly usable.

But I have a nagging feeling that it’s more than that. The RS6’s real problem is the RS4, a car that blows any preconceptions about Audis being a bit stodgy clean into the stratosphere, a car that proves beyond question that entertainment can be neatly embedded into Audi’s very particular DNA. Approaching the RS6 with key in hand I’m mindful of just how good the RS4 is, and just how much this car has to live up to. And then I have a reality check and realise that the RS6 can look after itself, thank you very much…

Having said that, the RS6 doesn’t shout its credentials from the rooftops. It’s a big car but it has a quiet menace rather than an in-yer-face aggression. Much has been made of the boxed ’arches, and in the cleverly groomed press shots they looks overt and confident, but actually they’re quite subtle (especially if you spec your car in metallic grey – an odd choice for a press launch). The 20in wheels, deeper front splitter and large-diameter twin-exit exhausts certainly endow the A6 shape with some much-needed muscle, but the RS6 lacks the clenched-fist tautness of the smaller RS4. I quite like that, though. An RS4 owner might want the odd nod of recognition, but the RS6 should slip under the radar more easily. In fact, given that it has 572bhp I can’t help thinking that Audi should put stealth paint on the options list…

Inside it’s all purpose and no glitz too. There are the usual excellent high-backed seats, a flat-bottomed three-spoke steering wheel with those paddles affixed behind, the screen for Audi’s simple-to-use MMI, and restrained aluminium and contrasting deep black trim. Standard fast-Audi fare. Only the speedo marked to 300kph and the glint in the door mirrors of metal stretched over the rear wheels provide clues to the RS6’s supercar numbers. Fittingly, only the driver gets to enjoy them.

Fire the V10 with a prod of the starter button just to the left of the gear selector and the RS6 does a credible impression of a supercar. The V10 is quieter than the one you’ll find in a Gallardo but it sounds busy, bassy and exotic. Just hearing it clear its throat goes some way to justifying the RS6’s £77,625 asking price (£10K more than the BMW M5 Touring and £3000 more than a Cayenne Turbo). Slip it into ‘D’ and you’re gently away on a wave of torque, though not without a delicate right foot. There is plenty of torque, of course, but the throttle pedal is very sensitive. The merest flick of the right foot sees the V10 snap into life like you’re trying to extract a 0-60mph time. As in the new TT, the mapping for the drive-by-wire throttle seems to give a 100 per cent opening even if you only ask for 30 per cent.

The RS6 does without the Magnetic Ride dampers seen on the TT and R8. Instead it keeps DRC (Dynamic Ride Control), as fitted to the old RS6 and the RS4. This system connects each diagonally opposed pair of dampers via two hydraulic lines and a central valve. Under steady driving the valve stays open, but when the car starts to pitch or roll the valve closes, exerting pressure on the oil, which forces the damper to push back on the spring and keep the car flat. The system has been revised for this application, too, now allowing the driver to switch between three damping levels: Comfort, Dynamic and Sport.

In Comfort the RS6 glides where the old car would have blustered; in fact the ride is excellent for a car on 35-profile rubber. However, it’s soon apparent that this setting isn’t up to the task of keeping all that weight under control even at a modest pace on these roads. There’s a hesitancy in the way it responds to the steering and more body-roll than seems necessary. ‘Comfort’ is strictly a motorway or urban setting, then. I select Dynamic and start to get acquainted with the twin-turbo V10.

Until you’ve learned to finesse your right foot, the oversensitive throttle can make the RS6 feel a little clumsy, but in fact its V10 is a beautifully progressive device. It pulls hard from tickover, the power ramping up through 2500-3500rpm, soaring at 4500-5000 and then – scarcely believably – building still further to a dizzying climax as it closes in on the 6750rpm limiter. It’s tricky comparing an upright, conventional car with a proper mid-engined supercar, but I doubt a Ferrari F430 could cope with the scale and breadth of the RS6’s performance without a very talented driver in the hot seat. Good job Audi fitted 390mm discs and six-piston callipers up front; they have phenomenal power and fine progression.

Even in Dynamic mode, the suspension still feels a shade too soft at this sort of pace. On downhill sections where you’re braking into a corner, the car pitching on the way in, you notice it struggling to contain the sudden lateral loading as you turn hard. Roll builds quickly and with it understeer. To be fair it never scrubs wide, but there’s just a few degrees of slip that stays constant as the corner opens out and you start to unleash the engine. In Sport the body control is much tighter but it brings with it an element of bounce over particularly ragged surfaces. It feels like the ideal damper setting is in there somewhere, but it just hasn’t been assigned a name yet…

The sweet six-speed auto is a great help on roads like this, popping in upchanges with DSG-like speed and adding a perfect blip for downshifts. The steering is fairly heavy and not quite as responsive as you’d like – all that V10 engine takes some turning – but you always feel confident of what’s going on at ground level, mainly because the RS6 feels so stable. At worse you’ll get a bit of understeer. Come sharply off the throttle as the front pushes a bit wide and you’ll feel the front tyres grip again and the rear starting to edge out just a shade. But the RS6 is flattering to deceive and never truly allows you to impose yourself on the chassis. Instead it just grips and monsters anything in its path. It’s a wild ride, but only because of the sheer speed of the thing, not from any tangible sense that you’re teasing the best out of it.

Of course, much of this is irrelevant for the sort of people who own RS6s. They tend to have a 911 or two in the garage, maybe a vintage Ferrari nestled alongside them. The RS6 is their daily runabout and they buy it because it’s an estate car with 572bhp and because they have a sense of humour. And because it’s a brilliant everyday car that just happens to have more stonk than their Porsche or Ferrari. A sledghammer to crack a nut it may be, but the RS6 is still a wickedly desirable thing if you have a scalpel waiting in the garage for when you really want to have fun.