A balanced, nuanced and interactive sports car this is not. But the TTS has its own appeal 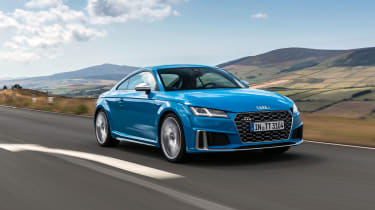 The TT has been an essential part of the Audi range for 20 years now. The original signalled the brand’s intention of becoming a serious player in the premium field, a design-first halo model that was to represent the Audi’s contemporary standing at its point of rapid expansion. As a driver’s car, well, the Golf-based platform and turbocharged engines didn’t really deliver, but as a design statement in the form of a small two-door coupe at the height of their popularity, the TT was a runaway success.

The thing is, this type of small coupe is no longer ‘cool’ according to most buyers, and as a design icon how can a third derivative of the TT’s aesthetic remain fresh and relevant? This is where the performance aspirations of the latest TTS come into play, as trends come and go, but great driving dynamics are timeless.

This third-generation TT has the best arsenal yet to achieve that goal - the lightweight and modular MQB platform, charismatic EA888 turbocharged four-cylinder engine and the latest seven-speed DSG dual-clutch gearbox are well established and effective, but can the latest TTS deliver where nearly all failed in the past? 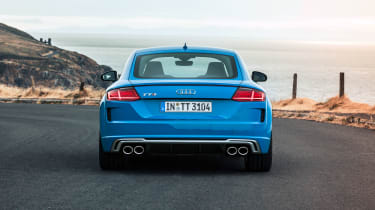 The TT still shares its basic underpinnings with the Golf, but where as before this was an afterthought on a compromised platform, VW’s MQB has proven itself to be a solid and proven chassis. Here, the Audi takes a turn, employing a significant use of aluminium in the structure, a wider track and stiffer mounting points for the suspension.

It’s powertrain is a is mounted transversely, so makes do with a Haldex-style all-wheel drive system rather than Audi’s traditional quattro system, operated via a multi-plate clutch pack on the rear axle. It’s a system used on many current four-wheel-drive cars and the previous TTS, but the system has been recalibrated for the new car and allows more power to be sent to the rear axle, especially in the car’s Dynamic driving mode.

The TTS also comes as standard with Audi’s magnetic ride suspension, which through a traditional system of running an electric charge through the magnetised damper fluid, changes the viscosity, and therefore the stiffness, with varying success. 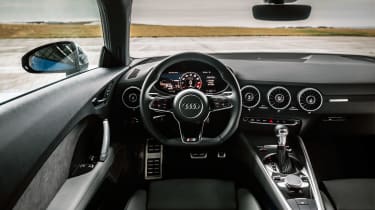 The interior deserves special mention as it remains, even four years after its initial release, one of the most resolved, cleverly detailed and satisfying cabins in the business. Centred around the now ubiquitous ‘virtual cockpit’, it’s still at its best within the TT’s wonderful reductionist interior.

The TTS is powered by the VW’s venerable EA888 2-litre, turbocharged four-cylinder engine. This engine is used in a multitude of high-performance VW-group applications including the Volkswagen Golf R, Cupra Ateca SUV, Skoda Superb and even the Porsche Macan.

In the previous TTS, it produced 306bhp, but along with new WLTP regulations, Audi has had to fit a particulate filter to the new car to help reduce emissions it has 4bhp less with a total of 302bhp.

The minute drop in power has been compensated for by greater maximum torque; rather than putting out 280lb ft, the new car produces 295lb ft. This has helped, despite the loss in power, reduce the car’s 0-62mph time by a tenth of a second to 4.5sec. 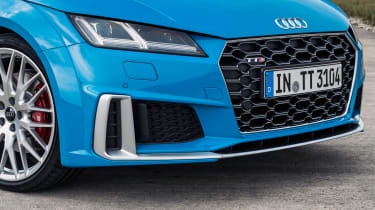 The Audi TTS is one of those cars that drives as it looks. It’s silhouette is not classically sporty, and somehow looks front-driven, as if there in an emphasis on the front axle. The driving experience is a perfect reflection of that, as your focus is always on the front wheels.

Traction is near-absolute, only scuppering to its front-driven origins under hard acceleration in the streaming wet, but everything else, from the way the steering’s feedback almost hints at torquesteer, to the way it shoulders into corners implying a heavy reliance on those front tyres.

The car we drove was fitted with optional 20-inch alloys, which are wrapped on quite astonishing 30-profile tyres that might look impressive, but severely affect the ride quality. Even the TTS’s magnetic dampers can’t quite overcome the sheer lack of sidewall, crashing into intrusions without any finesse or sophistication. When in the softest suspension mode, the TTS remains restless as the dampers only seem to manage larger body movements, and not wheel control. Head down a rutted or cragged back road and the crashing is wince-inducing, as you pick a path avoiding the worst intrusions and hold your breath when you can’t. It must be said though, over a particularly rough section, both wheels and tyres remained unmarked (thankfully).

The flipside of this rigidity in the suspension is absolute body control. There’s incredible stability as you brake, allowing you to stay on the pedal as you enter a corner and maximise front-end grip. Take a less aggressive attitude, though, only brake in a straight line, and there’s still so much front-end bite that the TT willingly follows your steering inputs.

Grip remains just as unwavering as you accelerate from apex to exit, too. There’s, perhaps, a little hint of understeer on tighter corners but never enough that you need to come off the throttle, the TTS haldex shuffling more power to the rear axle before you even need to react. 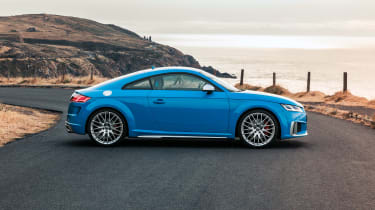 Without any need to worry about traction, you can just experience the TT’s mighty acceleration. It might not be the most aggressive of Audi’s TTs (the five-cylinder RS takes that accolade), but the S is still explosive – you absolutely can’t feel the slight loss of power over the previous model.

The TTS’s progress is made even more impressive thanks to the seven-speed dual-clutch transmission. Not only are the upshifts practically instant, they’re so seamless that if it wasn’t for the change in revs and the little parp from the exhaust, you wouldn’t know you’d shifted to a higher ratio. It does lack the final degree of response in the closely related Golf R, but seems to have a little more low-speed dexterity to make up for it.

Such remarkable talents are certainly admirable, but they don’t make the TTS immediately that enjoyable. However, play around with the TT’s driving modes – you have a choice of Comfort, Auto, Dynamic and Individual – and you can turn it into a more gratifying car.

Dynamic, the car’s sportiest setting, seems like the obvious place to start to make the car feel at its best on a twisting B-road. But the already uncomfortable suspension is made worse in this setting, the steering is unnecessarily beefy, the throttle seems abrupt and there’s a mock five-cylinder engine noise pumped into the cabin via the speakers. 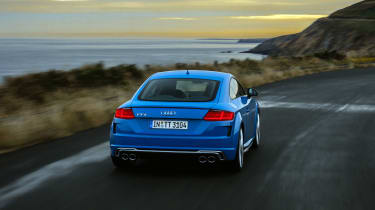 Comfort and Auto seem to provide a more natural and honest set-up; the weight of the steering, although light and not very communicative, suits the other control weights of the car allowing you to feel.

The engine noise is less obtrusive, too. And although the sound isn’t the most memorable, the quieter, more four-cylinder-like noise is pleasant. Use the Individual mode to cherry-pick the best bits from the engine, suspension and steering, and you’re able to tune the TTS into something more suitable to your tastes.

The TTS might not be a car that brims with excitement and feel, and it doesn’t really allow a driver much in the way of real, rewarding influence. However, it’s such an easy car to extract its performance from that, no matter what your skill or even your mood, you can cover ground in a safe and appealing manner at any time and on any type of road. The reality is that it’s never going to be as gratifying a sports car as a Porsche 718 Cayman or Alpine A110, but it is more than just a Golf R in a different bodysuit. It has its own character, one based on the sheer capability of throwing itself down a road at an eye-widening speed.

The TTS starts at £44,575 in basic spec and comes equipped with all the necessary equipment one might expect. The good news is that the TTS’ performance is not reliant on the options list. Keep it basic, running on smaller wheels and the TTS’ value proposition is strongest.

At this price, the Alpine A110 is an obvious rival, starting a couple of thousand pounds more at around £46k. It’s nothing like as quick in a straight line, but the Alpine is one of our absolute stars of 2018, with an incredible balance and finesse that is almost the complete antithesis of the Audi. A basic Porsche 718 Cayman also remains one of the most complete sports car packages at a tad over £44k, if you can overlook the flat-four engine that is considerably worse than the Renault- and VW-derived units found in its rivals. Who would have thought that five years ago?

But the TTS remains a car that will likely be upsold to for existing customers, rather than a real alternative sports model. It’s too constrained by its supermarket underpinnings in a sea of bespoke mid-engined models to really shine as a sports car, even if its bullish character gives it plenty of kudos to stand on its own merit.