Whether it’s smooth and sophisticated or motorsport-like in its aggression, the V8 remains one of our favourite engine types, warts and all 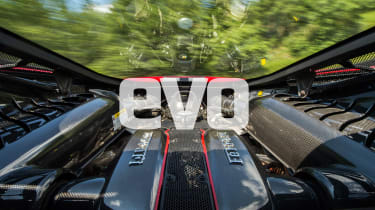 The V8 engine. A symbol of affordable performance in its heyday; an engine designed to perform, but without the associated cost (or stigma) attached to a ten or 12-cylinder. Made famous by America's pony cars, a V8 is inherently flawed from an engineering perspective, and yet the V8 is a deeply desirable engine, its flaws only adding to the charisma that defines those eight angled cylinders.

With a packed catalogue of fabulous V8s to choose between, the engines in our ‘best’ list represent the team’s favourites from the modern era. You’ll note a couple of common threads, but also a wide variation of applications, sources and characters. Few are about outright speed, and most specialised specifically for a performance car application.

So in no particular order, these are our favourite V8 engines, and the cars they’re found in. This is not based on power outputs, efficiency or unique attributes, but what makes them the defining aspect of many of the cars they feature in, starting with something particularly Speciale. 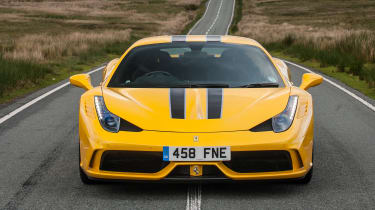 The F136 engine, manufactured by Ferrari in Maranello, was actually first found under the bonnet of the Maserati Coupe in 2001, itself a mid-cycle update of the previous 3200GT. In that application, the wet-sump cross-plane V8 was noted for its rich tones, if not outright performance. The F136’s application in Ferraris was very different though, adopting a flat-plane crank and dry-sump lubrication for its first use in the F430 in 2004.

Upped to 4499cc in 2009 for the new 458 Italia, the F136’s peak form came four years later in the 458 Speciale, when power was lifted to 597bhp way up at 9000rpm. Not everyone was completely sold on the motorsport-style blare coming from the high-mounted exhausts, but its responsiveness and the savage way it flicked up the rev range made it the perfect partner in crime in one of Ferrari’s most memorable mid-engined models. 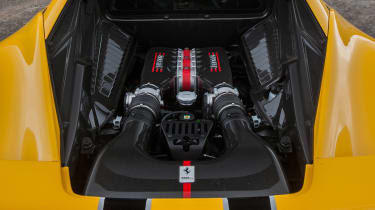 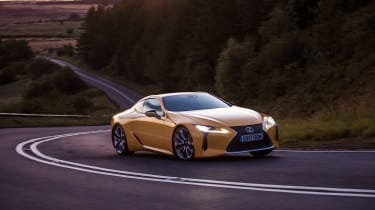 Japan might not be the first car manufacturing nation you would associate with V8s, but Lexus, and more specifically its parent company Toyota, have a knack at turning an otherwise dull engine into something rather special. The UR series of V8 engines is found across global Toyota and Lexus ranges in everything from limousines to Land Cruisers, but in 2UR-GSE form specifically, has turned into a wickedly charismatic V8 engine.

Used only in Lexus models, the 2UR-GSE’s heads were co-developed by Yamaha, who applied its expertise in both high-performance engineering and sound design to create a hugely satisfying naturally aspirated 4969cc unit that makes an incredible noise, even if it’s not actually that powerful. Its most recent application was in the brilliant LC500 sports coupe whose cultured bark matches its concept car looks. 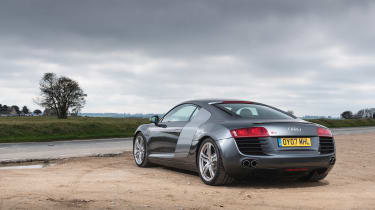 Audi’s high-revving V8 engine was based on the existing 40-valve unit, but was comprehensively redesigned for use across the Audi range. As a result, it was available in two specifications – a ‘comfort’ version, and the high-performance example that was first used in the B7-generation RS4. Although there is not much exotic engineering within this engine, its inherent love of revs and sonorous timbre defined it as a brilliant V8 engine of its time.

It was also the first V8 engine to use Audi’s ‘Fuel Stratified Injection’ system derived from its dominant period of endurance racing, and when combined with the six-speed manual, made the 4.2 R8 of its time a real superstar against many rivals. 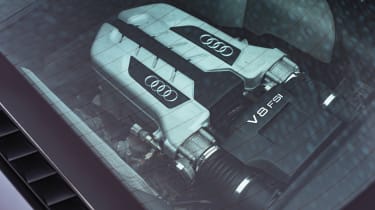 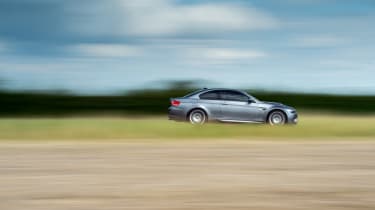 Where the Lexus and Audi units found above were closely related to more humdrum relatives, the S65 V8 was an entirely different entity from BMW’s other V8 engines. It was designed and developed by BMW’s M division exclusively for the E92 M3, and produced its 414bhp at 8300rpm.

The S65’s foundations were instead derived from the S85 V10 found in the larger M5, and so shared its basic cylinder dimensions, individual throttle bodies and double VANOS variable valve timing system. A larger and more powerful 4.4-litre version of the S65 was revealed for the limited-edition and astoundingly expensive M3 GTS. It was designed chiefly to increase low-rev torque, while not compromising on the standard 4-litre’s ability to rev. 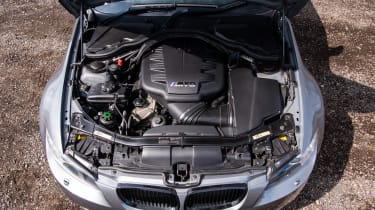 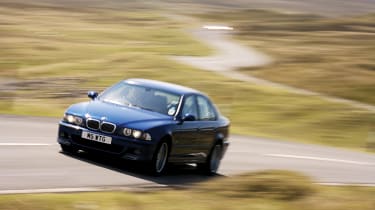 The BMW M division’s first V8 was called the S62 and found itself under the bonnet of the E39 M5, and later the BMW Z8 Roadster. Like the S65 above, the S62 featured individual throttle bodies, BMW M’s VANOS variable valve timing system and a semi-dry sump oil system, that used two scavenger pumps to limit oil starvation under hard cornering.

Despite sharing far more with the normal BMW M62 V8 already found in the 5- and 7-series, its larger 4941cc capacity and more aggressive internals yielded some impressive numbers for 1998, including breaking the 400 PS (394bhp) power barrier. 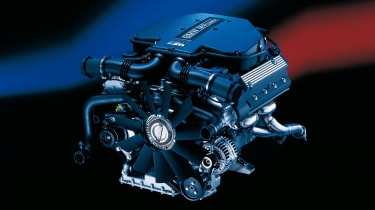 We could not have compiled this list without mention of an AMG V8, and it’s the M159 that was arguably the finest of them all. Noted for its large capacity – all 6208cc of it – the M159 yielded big torque numbers, but unlike most engines of its size still relished revs. Although it was closely related to more mainstream AMG V8s used in the C63 and E63, the M159 was bespoke to the SLS, dry-sumped, and in Black Series form revved to an 8000rpm red line, some 800rpm higher than in the standard SLS.

It also featured a bespoke valvetrain, intake, headers and exhaust compared to the M156, and in the Black Series was the most powerful naturally aspirated engine up to that point regardless of cylinder count. And what does 6208 cubic centimetres of swept capacity sound like at 8000rpm? Like almost nothing else. 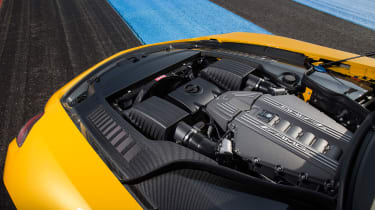 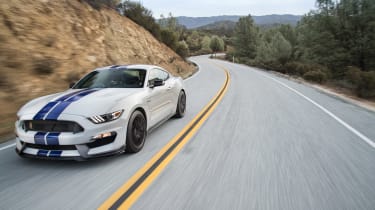 Ford V8s have typically not been of exotic make-up or for use in hypercars, but the Voodoo is something rather different. Based on the same underlying engine design as the more common 5-litre Coyote V8, the Voodoo was designed specifically for the Shelby Mustang GT350, with a larger 5163cc capacity and a very unusual application of a flat-plane crank.

As a result, unlike most American V8s that have gone before, the Voodoo revs, and revs, with a muscle car-like low-rpm gurgle that keeps on going up to its 8250rpm red line. Torque is still strong, but this engine is all about the revs – an Amercian muscle car with a difference. 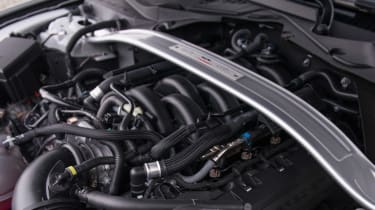 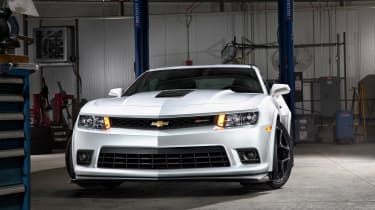 It wouldn’t be a list of V8s without the iconic General Motors LS. And the best of them all? The naturally aspirated, 427 cubic inch (or 7-litre to you and I) LS7, as was used sparingly throughout the GM range over a relatively short period. It’s part of the same iconic Chevrolet small-block engine family, and as such does without overhead cams, instead relying on pushrods, which although somewhat archaic, save on both space and complexity.

It might not seem cutting edge, but the LS7’s magic lies in its size, feeling effortless and yet still happy to rev with reasonable alacrity. It was first found in the C6 Corvette ZO6, and later in the brilliant Camaro Z/28, but it also found itself used in a limited-edition Holden Commodore called the W427, which shared its underlying ‘Zeta’ chassis with the Camaro. 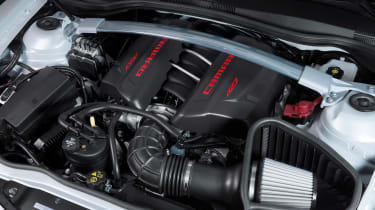 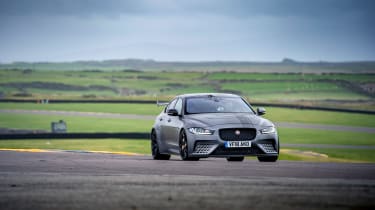 Jaguar’s sonorous, supercharged petrol V8 has been found in various models since 2009 when it was first fitted to the XKR and XF-R saloon, but over the past ten years has slowly transformed into the brilliant AJ133 that currently resides in its most potent form under the carbonfibre bonnet of the XE Project 8.

As the only supercharged V8 in this round-up, its typical combination of instant boost and that telltale whine still appeals deeply, and gives the AJ133 a unique edge in the turbocharger-dominated supersaloon sector. 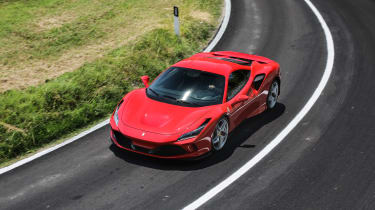 And so we arrive at our final engine, the first and only V8 on this list fitted with turbochargers. A habitual International Engine of the Year winner, the F154 is Ferrari’s first go at turbocharging, and boy did it get it right. After a few updates and iterations, the F154’s ‘tailored’ torque mapping for each transmission was a masterstroke in maintaining the build of torque that is so often lost in turbocharged engines.

It’s the Ferrari’s response that so perfectly compounds its astounding capability. Many turbocharged V8 engines hit hard, but none does so with the finesse or intensity of the Ferrari F154. It might lack the serrated edge and piercing noise of the best flat-plane Ferrari V8s that came before, but the pay-off is the raw speed the car it’s in is then capable of. 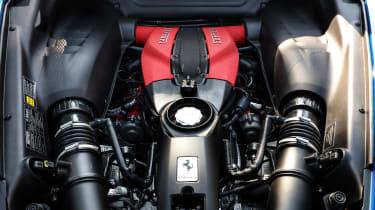