We've already been impressed by Ford's latest Focus RS. These cars are what it must live up to... 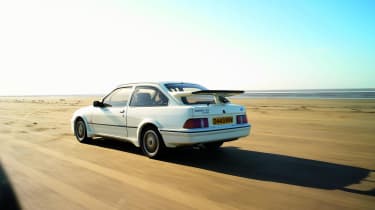 By the 1980s, touring car racing was changing. The rules that allowed the massive wide arches and wings of the RS3000 Capri in the 70s had been abandoned. While turbocharging had revolutionised F1 and rally cars into fire spitting animals, touring cars had become tame. The turbocharged Sierra Cosworth changed all that. In the second half of its first season of racing – once it had been made reliable – the Sierra RS dominated.

After Group B was outlawed, Ford used the Sierra Cosworth for Rallying too. Its rear wheel drive configuration was a handicap on loose-surface rallies, but it was extremely competitive on tarmac. Despite Cosworth being involved with RS Fords as far back as the Mk1 Escort, the Sierra Cosworth was the first Ford to wear the name. 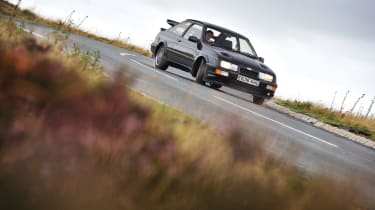 The first Sierra Cosworth, although surprisingly competitive in its first season, needed to be improved. There had been reliability issues, and Ford's rivals had raised their game too. The RS500 was an even more extreme version of the Sierra Cosworth, homologated so the race car could continue to win.

The road car had a new front bumper and grill to feed more air to the new, bigger turbo, larger intercooler and oil cooler. The engine also received another set of injectors, and although unused by the road car, they helped the race car produce over 400bhp. It proved successful in race trim, and is perhaps best-known in the Texaco livery in which it competed in the World and European Touring Car Championships. 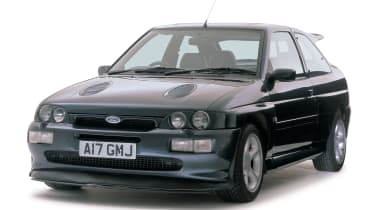 For the Escort Cosworth, RS went back to its roots and built a dedicated rally car. To be competitive against the Toyota Celica and Lancia Delta Integrale, four wheel drive was a necessity. The Escort Cosworth was based mechanically on the earlier 4WD Sierra Sapphire Cosworth, but used an updated 2.0 four cylinder turbocharged Cosworth engine, developing 217bhp.

The body of the MK5 Escort was then modified with wide arches, deeper sills and bumpers, but most obvious was the huge bi-level wing, similar to that seen on the RS500 - one element sat at the trailing edge of the tailgate, while a huge whale tail and central support sprouted from the edge of the roof. In rally trim, the car never won a title - but won eight victories in the WRC in Group A specification, and twice as a WRC car. 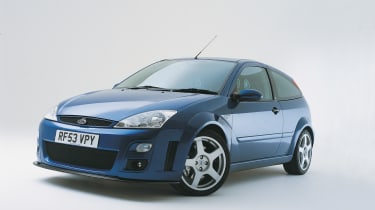 Much to the disappointment of Ford RS fans, the first RS Focus did not get a bespoke four wheel drive transmission. What the Focus RS did get was a set of Brembo brakes under OZ Racing wheels, Sachs dampers, a wider track hidden under bulging arches, and more aggressive front and rear bumpers.

The engine was a 2-litre turbo changed 4-cylinder with water cooled intercooler that produced 212bhp. In 2002, that was plenty for a front wheel drive car to handle so a Quaife LSD was utilised to help aid traction. The reality, as evo discovered on its first acquaintance with the Focus RS, was something of a handful - though some subsequent examples have proven themselves to be true Rallye Sport products. 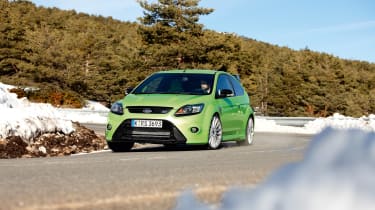 Gone were the subtle but menacing looks of the Mk1, and in came garish spoilers and overt body modifications for the Mk2 RS. It wasn't all show though, with a 5-cylinder turbo charged engine developing 300bhp and 324lb ft of torque. Like the Mk1, it was front wheel drive and also used an LSD.

The combination of considerable turbocharged power, front wheel drive and an LSD made for some unruly handling characteristics in the Mk1 but huge improvements were made for the Mk2. Despite significantly more power, torque steer was reduced thanks to its RevoKnuckle suspension. It ran a contemporary Megane R26 close - illustrating how right Ford had got it - while the engine felt hugely characterful in an era dominated by four-cylinder units. 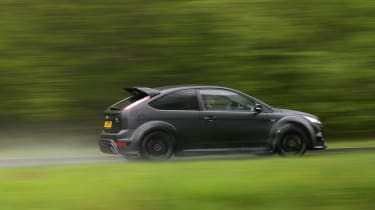 Limited to just 500 examples the Ford Focus RS500 is one of the rarer RS models but it was more than just a matte black wrap and a plaque. The RS500 Focus had 45 extra horses (and 15lb ft) over the Mk2 RS thanks to a remap, revised exhaust, intake and intercooler.