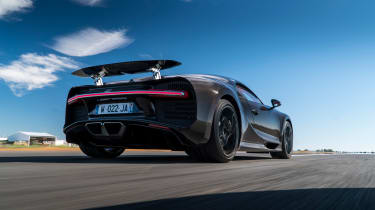 (This article was originally published in December 2017)

Walk into a BMW dealership asking for a 200-horsepower car in 2017 and the salesperson will probably hand you the key to a 320d. If you did the same back in 1979 they’d have put you behind the wheel of an E12-generation M535i, packing six cylinders and 3.5 litres, and sitting below only the M1 in BMW’s hierarchy.

When it arrives later this year, the M535i’s descendant – the F90-generation M5 – will make something north of 600bhp, enabling it to compete in a segment where such figures are becoming the norm, having long ago climbed above 300, 400 and even 500bhp.

It’s the same story in virtually every other sector in the performance-car market: cars now make three times (or more) the power that their contemporaries did just four decades ago, but do so with greater reliability and astounding ease of use. In the last decade in particular, technological advancements have resulted in some astonishing numbers, aided by sophisticated electronic-control systems, tyre advancements and, in some cases, electric motors – to assist or even power the car outright.

Hot hatchbacks have brought some of these developments within reach of the greatest number of people. Time was when you could dethrone traditional sports cars with a small three- or five-door model by simply dropping in a larger engine – preferably with fuel-injection, though forced induction briefly found favour in the 1980s, with blue-collar heroes such as the Escort RS Turbo and MG Maestro Turbo outpunching their naturally aspirated counterparts. Sixteen-valve heads soon put a stop to that, and variable valve timing (and lift, as in Honda’s VTEC engines) took things further still – in 1999, 170bhp seemed an astonishing amount in a car as small as a Renault Clio. The first Focus RS set the template for the modern era, though, making over 210bhp from its turbocharged four-cylinder: today’s equivalents now send another 50 per cent to the front wheels alone. 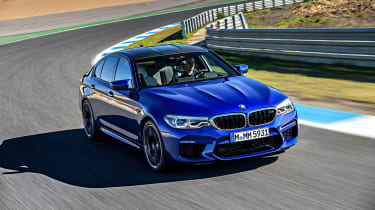 A history of sports saloons is ostensibly a history of BMW’s M5, with both cylinder count and capacity increases ensuring outputs have climbed steadily since the mid-1970s. Forced induction features in this category too. Both the Lotus Carlton and the supercharged Jaguar  XJR knocked BMW off its perch in power terms, but the E60 M5’s staggering 5-litre naturally aspirated V10 lifted the class straight into supercar territory in 2004. Since then, turbocharging has been the go-to when reaching for the 600bhp mark, but cars such as the 671bhp Porsche Panamera Turbo S E-Hybrid and 595bhp Tesla Model S P100D have shown the potential of electric power – and not just to reduce emissions.

Electric power has also come to define the supercar class. It didn’t start that way – back in the 1970s, Lamborghini needed nothing more than a 3.9-litre V12 to make its cars among the fastest on the planet. Ferrari countered with the turbocharged 288 GTO, but it was 1987’s F40 that moved the game on: 2.9 litres, eight cylinders and a pair of turbochargers made for a mighty (and conservatively quoted) 471bhp. Bugatti took things further with the quad-turbocharged EB110, but neither could compare with what upstart McLaren had in store. Its BMW-supplied, naturally aspirated V12 produced 627bhp, helping to make the F1 it resided in arguably the first example of what we now call a hypercar. Just over a decade later Bugatti’s Veyron breached the 1000 PS (986bhp) mark with its 8-litre, quad-turbo W16. Since then, the race towards 1500bhp has been rapid, with either electric power or turbocharging – normally both – taking hypercars to new heights.

> Click here for our review of the BMW M5

By contrast, sports cars have moved at a slower pace. Porsche’s Boxster provides a good indication of two-seaters in recent times, starting with 201bhp in 1996 and rising to a turbocharged 345bhp in the new 718 Boxster S, but weight, as well as power, has influenced performance in this category. The 82bhp Morgan 3 Wheeler is less potent than a 1974 MGB but a great deal faster, while Alfa’s 4C Spider makes less power than a TVR Griffith from 1992, but still gets to 60mph a few tenths quicker.

And what about performance coupes? These could also be traced through a Porsche lineage in the form of the 911, but with the likes of Nissan’s GT-R, Audi’s R8 and, of course, BMW’s M3, it certainly hasn’t completely dominated this class – on paper, at least.

Click on the image above to see in more detail how outputs have progressed over the last 40 years as we chart the power figures of 100 key evo models. Then maybe take a moment to ponder where those lines are heading… 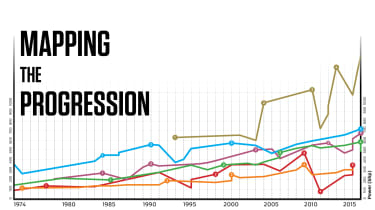 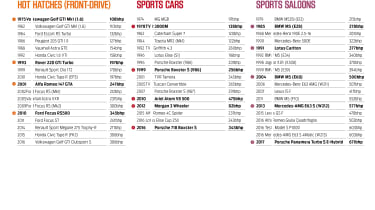 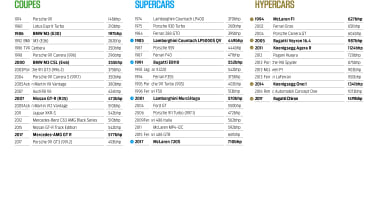 The future of power

Two-time World Superbike champion Troy Corser doesn’t just have a fast name but delivered perhaps the drollest line ever uttered on the subject of speed. Asked by a wide-eyed reporter after one race what it felt like to do 200mph on two wheels, he replied: ‘much like 199mph’.

I interviewed him in the early 1990s and can confirm that, in the spirit of his native Australia’s favourite raincoat, the Corser take on most things was dry as a bone. He told me that doing 199, 200 or 201mph meant absolutely nothing to him. All that mattered was his speed in relation to that of the other bikes he was racing – differentials of probably no more than 2-3mph. That was the epicentre of his attention, what his senses and reflexes were attuned to, the font of his personal buzz.

In one respect, of course, he was absolutely right. The expression of extreme speed is like a billionaire’s level of liquidity: just a big number. And without a point of reference – the proximity of scenery, another fast-moving car, a low-flying jet – the sensation per se won’t even be that engaging. Einstein understood. To really deliver, speed requires heaps of context, not merely a rapidly escalating blur of numbers. Want to experience hypercar-esque 1 G-plus acceleration in the comfort of your own people-carrier? Swivel one of the rotatable seats through 180 degrees and get the driver to stand on the anchors at 70mph on an empty stretch of road. The forces acting on your body will be the same as those you’d experience from a standing start in a 1500-horsepower, 16-cylinder, quad-turbo, 261mph (limited), launch-controlled Bugatti Chiron. You’ll be pushed back in the seat with just the same sustained ferocity but, chances are, it will just seem vaguely unpleasant instead of the thrill of a lifetime. You’re missing £2.5million of context. 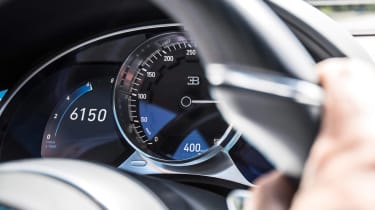 The necessary bond between the hyper-rich and the most expensive and powerful hypercars is what will continue to underwrite not just their survival but also the persistent push for ascendency. And numbers are the drug. The higher they go – price, power, speed – the stronger the weird over-arching psychology they create. We’ll call it the never-having-to-try paradox. Because everyone knows he or she doesn’t have to, a Bugatti Chiron owner truly giving it the beans on the public highway is probably something you’ll never see. Like the nuclear option, the potential is the power, not power itself. Which seems like a bit of a waste. Nor is spare capacity for the sake of it likely to end there. Peak overkill is in sight but we haven’t reached it yet. It means that a 300mph series-production hypercar emerging in the next few years isn’t a possibility but a stone- cold certainty, the next ultimate example of ‘untouchable automotive omnipotence with nothing to prove’.

The promise will attract the money but, in truth, the untouchable message won’t really wash anymore. The Chiron’s predecessor, the 987bhp, 253mph Veyron, like the McLaren F1 before it, was meant to be the ultimate embodiment of the notion, a definitive line in the sand. Instead, it effectively kick-started the hybrid hypercar projects prosecuted by Porsche, McLaren and Ferrari with the 918 Spyder, P1 and LaFerrari – all cars that could match the Bugatti’s acceleration in any real-world scenario without the need for a bombastic top speed, and run rings around it dynamically. It was only a matter of time before the Veyron became a whipping post for the Nissan GT-R tuning industry, countless YouTube clips visiting ritual humiliation on ‘the world’s fastest car’ in roll-on drag races achingly played out on wobbly smartphone videos usually, to the Veyron’s credit, in the Troy Corser 2-3mph differential zone.

In Top Trumps terms, even the mighty Chiron is already stuck between a rock and a hard place, pegged to a stats-sheet dead heat in a race to 60mph with an all-electric, five-seater Tesla P100D saloon but also fixed in the crosshairs of the new, circa-300mph Hennessey Venom F5. And it simply wouldn’t be considered a bait worth rising to for any self-respecting 2000bhp-plus road-legal drag specialist in a straight-line tussle. A modified but outwardly standard 2006 Ford GT, for example, recently accelerated to 294mph in the space of a mile.

The future will be about packaging performance and efficiency in a tightly defined yet meaningful way. Led by the example of today’s hybrid hypercars – most pertinently the Porsche 918 Spyder – electricity will provide both the environmental sweetness and light and the supplementary muscle to hit hard where it really counts, on real-world roads and not some fantasy land-speed-record venue.