Few people understand engines like Professor Jamie Turner, so we ask him how manufacturers will get more power from them in the future. 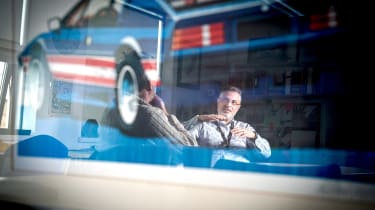 Professor of engines. Now that’s a job title. Since 2015, Jamie Turner has been professor of engines and energy systems at Bath University. I’ve known Turner for years and first met him when he was at Lotus (he had two stints at the Norfolk company), where he worked on the Corvette ZR1 engine, Lotus’s own V8 and numerous skunkworks projects, including a test engine nicknamed Omnivore for its ability to run on virtually any fuel, and an optical engine that allowed the combustion process to be observed through a transparent cylinder. Turner worked for Cosworth F1 too, and prior to the Bath appointment led spark-ignition engine development at JLR.

Professor Turner also has a very cool office, most likely the coolest on campus. It is a shrine to the internal combustion engine and, to a lesser extent, Lotus. On a filing cabinet is a vast cylinder that’s one of the 18 that make a Bristol Centaurus radial aircraft engine. On a windowsill is a rotor and crankshaft from a rotary engine and also a sectioned Roots supercharger.

Yet while the man who helped develop Norton’s rotary engines (Turner adores bikes) loves a traditional motor, he’s not at all stuck in the past. Quite the opposite. ‘I drove a Tesla recently and really liked it,’ he admits, adding: ‘I felt a bit dirty.’

Fortunately, Turner predicts a long future for the internal combustion engine. ‘The reduction of carbon dioxide has been absolute godsend to engineers,’ he explains. ‘The pursuit has made engineering incredibly important and has laid down fantastic challenges for us.’

In fact, while chatting with Turner about supercharging and amazing stuff such as the Napier Nomad flat-12 two-stroke diesel compound aero engine (his favourite engine) is cool, the really fascinating area is his views on the future of the internal combustion engine and how we’re going to get more power from it.

‘One thing I think we’ll see fairly soon is the introduction of higher-octane fuels,’ he says. ‘Compared to what the car industry has achieved – about 30 per cent reduction in CO2 since 2000 – the oil industry hasn’t really played its part yet in reducing emissions. But it will do. They accept that higher-octane fuels will allow us to use higher compression ratios to improve combustion efficiency. From our side, I think the number-one move to allow higher compression ratios will be the development of water injection to reduce combustion temperatures – it’s all about controlling knock or pre-ignition. BMW has used water injection in the M4 GTS but that was a bit simple compared to the really optimised systems they have recently published on introducing the water with the fuel in direct injection.

‘Number two on my list of technologies that we’ll soon see more of is variable compression ratios. Nissan has produced a variable-compression-ratio engine but it’s not really a new idea at all. Neither is water injection, for that matter. There aren’t that many totally new ideas.’ So water injection and variable compression ratios are the two most important technologies in Turner’s view, but they’re top of a list that includes higher fuel pressures (350bar or more) and electric super- or turbocharging. ‘We’ll see more cars adopting 48-volt electrical systems to power these devices,’ says Turner, ‘and we’ll also see stop- on-the-move coasting, in which the engine will stop and the clutch disengage to reduce fuel consumption.’

A current Goodwin hobby horse is that modern engines are becoming soulless. The table-top torque spread and even the lack of turbo-lag have reduced much of the excitement that you get from revving an engine and feeling the power increase dramatically. Only the most exotic engines, such as Porsche’s naturally aspirated 4-litre flat-six, Ferrari’s 6.3-litre V12 and also the Lamborghini Aventador’s V12 have old-school drama. So is the soulful engine dead?

‘That flat torque curve is there for emissions reasons, because it suits the drive-cycle used in testing,’ says Turner. ‘Also, it encourages drivers to change up a gear early and enables an automatic gearbox to do the same, both of which reduce emissions and fuel consumption.’

Professor Turner is in no doubt that as far as proper powertrains are concerned, plug-in hybrids will be a major trend. Which brings us neatly on to the more sexy matter of gas turbines as power generators. Jaguar fitted them to the C-X75 supercar concept of 2010, but the subject has since gone quiet.

‘For sure, they have a future,’ says Turner. ‘They’re efficient enough when running at a constant speed, but the important things are that they don’t need a cooling system and they’re light. Those are huge advantages for [electricity-generating] range-extenders because currently an internal combustion engine is used. For that you need separate cooling systems for the engine and the electrical system as they require cooling water at different temperatures, and you carry the engine at all times, even though you don’t really ever want to use it.’

Because Turner is on the side of academia, there is no corporate or company line to toe, meaning all subjects are open to discussion. Try talking about the possible rebirth of the two-stroke engine with an engineer from a car company and it’d be a short-run thing. The professor of engines doesn’t think the two-stroke is about to return, but he likes talking about it. And he’s still researching it now. ‘Thermodynamically they are just better. And thermodynamics is what it’s all about. You could say it’s a shame that we’ve spent 120 years building engines operating on the wrong cycle...’

Iain Litchfield has been extracting comedy amounts of horsepower from engines for 20 years – most famously those of Nissan GT-Rs.

‘It’s about airflow,’ he says. ‘With turbocharged cars, it’s quite simple in theory: you fit a bigger turbocharger that will flow more air. Unfortunately, it’s not quite as simple as that, particularly if you’re after big increases in horsepower. The bigger the turbo the more lag you’re going to get, not just because of the mass of the turbine and compressor but because of aerodynamic drag on the bigger blades. To help solve the problem you can go up in engine displacement, which is what we do on the really powerful Nissan GT-Rs. It’s why McLaren has made the 720S’s engine larger.

‘Eventually you need larger injectors that can flow more fuel, bigger fuel lines and higher- capacity fuel pumps. Then there are intercoolers that have to be made larger to cool the extra air. Manufacturers are turning to chargecoolers because they remove heat so quickly. The snag is that that heat goes into the cooling system, which on a circuit with hard use is a problem.’

Tuning modern, naturally aspirated engines presents other problems. Mainly because they’re just so good out of the factory.

‘The power gains tend to be very small,’ says Litchfield. ‘We can fit a new exhaust system to a Nissan 370Z and remap the ignition, fuelling and even valve timing, but still only get a gain of 15bhp. The next step is to fit new intake systems and camshafts and up the compression, but even then the gains aren’t huge.’

Ken Brittain, who together with Dave Brodie set up Brodie Brittain Racing, has spent a lifetime coaxing power out of engines. His career started at Willment, the tuning company and race team that ran Cobras and GT40s during the 1960s.

‘You aimed to increase the volumetric efficiency of the engine,’ explains Brittain, ‘by increasing the revs by allowing the engine to breath.’ This involved hours of painstaking work on the bench, balancing combustion chambers and intake ports, gas-flowing the ports and developing a new camshaft to extend the valve- opening times.

‘Depending on the fuel available or allowed, you’d also raise the compression ratio. Lastly, you’d spend ages on the dynamometer, constantly making changes, using different camshafts and exhaust manifolds. It was time-consuming and often boring – particularly blueprinting an engine, which was a good way of extracting more money from a customer.

‘The quality of the components you were working with was varied and often really poor. When you worked on the Ford Essex V6’s cylinder heads you’d often break into the water passages. We had tons of them that were only good for scrap. I went to Ford’s foundry to find out what was going wrong. Ford weren’t removing the flashing on the casting so the heads didn’t sit correctly in the jigs when they were being machined.

‘The quality of modern engines is unbelievable, with accuracy beyond F1 engine standards of only decades ago. The first time I opened up a Suzuki Hayabusa engine I was astonished. The cylinder head looked like a full race head from Cosworth. All I had to do was give the chambers and ports a quick polish.’