The Jaguar F-type Project 7 is a roofless speedster concept with a big power rise. Even more exciting? 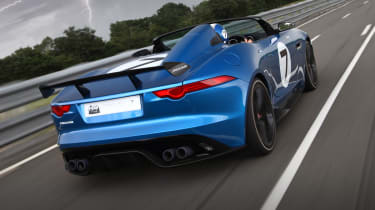 The Jaguar Project 7, a speedster concept born out a doodle of what a single-seat F-type could look like. It’s the creation of Cesar Pieri, who’s only been a designer at Jaguar for 12 months. Project 7 is a one-off special based on a regular F-type V8 S, and got its world premiere at the 2013 Goodwood Festival of Speed. Destined to remain a concept car, there’s no price tag to discuss.

The bodywork on Project 7 has been completely reworked and the standard windscreen has been replaced by a cut-down version, which necessitated a completely new surround to be created. This was made harder because Jaguar insisted it still had to be capable of supporting the car’s weight in a rollover situation.

Next, the folding roof was removed and a beautiful rear deck (fixed, meaning there’s no boot) was designed with a single rear fairing (incorporating the F-type’s standard roll hoop) flowing away from just behind the driver’s head.

While the regular F-type V8 S has a 488bhp supercharged 5-litre V8, the Project 7 sees an increase to 542bhp thanks to the car having the revised engine from the XKR-S. The result is the claimed 0-62 time drops to 4.1sec, while top speed remains limited to 186mph. But this would broach 200mph if the electronic limiter was removed…What’s it like to drive?

From behind the wheel, you’re instantly struck by how much lower you’re sitting (-50mm) in the thinly padded, bucket race seat. You’d expect the cut-down screen would be annoying but with the lower seat position, it all feels very normal. Until, that is, you bring the supercharged V8 into life and the thunderous bellow created by the freer-flowing ceramic-coated, quad-pipe exhaust hits you.

We only had the briefest of drives on a rain-soaked test track but there was plenty to like here, with the car encouraging you to drive it hard because it all feels super friendly in a way you’d never guess from that aggressive exterior. There are no side-screens on Project 7 but the rear fairing behind your head keeps buffeting to a minimum and by the end of my brief drive, I was desperate to have another go.

It’s hard to know what to compare it to. Against an Alfa Romeo 8C Spider it has even more performance than the Italian but the Alfa fights back by having a working roof. The Jaguar beats the Alfa for sheer visual drama, though, which considering the 8C is one of the prettiest cars in recent memory, is quite a result. The fact you can actually buy an 8C (albeit a used one) means it technically wins, of course.Anything else I need to know?

Because there’s no need for a numberplate, or a need to comply with a front impact crash test, the ugly bar across the F-Type’s grill has gone and its removal  makes all the difference to the look of the car. Rather than the surround being finished in chrome, on Project 7 it’s painted white and together with the blue metallic paint and white racing strips reminiscent of the Ecurie Ecosse Jaguar racing team, no matter how much time you spend with the car, it looks just as jaw-droppingly desirable as it did when you first clap eyes on it. It takes a very distinctive car to achieve this feat and that sums up exactly what Project 7 is; special, very special indeed.