We gather the best from the Bonhams Bonmont, no-reserves supercar sale 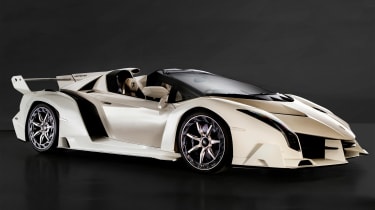 The small town of Cheserex in Switzerland was host to a spectacular, no-reserves sale at the weekend, held by world-renowned auction house Bonhams. The sale saw a vast array of metal sell from just over £10,000 to almost £7million.

Leading the charge was a 2014 Lamborghini Veneno Roadster, number seven of just nine cars made, and finished in a rather acquired spec. Off-white exterior paint complete with the original owner’s initials on the bonnet and doors, a beige interior, and of course, chrome wheels, set it apart from the eight other Veneno Roadsters. First unveiled on the deck of an aircraft carrier for the brand’s 50th anniversary, it sports a 740bhp 6.5-litre NA V12 – that’s more power than the Aventador upon which it’s based thanks to larger intakes and a new exhaust. This car had just 325km on the clock and fetched an eye-watering £6.8m, a premium of around £3.6m over its already staggering £3.2m price when new.

Selling for £3.7m was a Koenigsegg One:1, a model aptly named after its power-to-weight ratio. Some 1360bhp are responsible for just 1360kg, providing it with some unsurprisingly spectacular performance figures. Being one of just six ever made and reading just under 600km on the odometer, it fetched a near-£1.5m premium over its price when new.

As you might imagine, cars such as these don’t often come up for grabs, making this sale an interesting guide for just how much the select few are willing to pay for certain models in 2019. Take this Ferrari Enzo, for example, a 21,000km example finished in Modena Yellow – it sold for a very healthy £2.5m compared to the £1.8m of its successor, the LaFerrari, also in the sale. 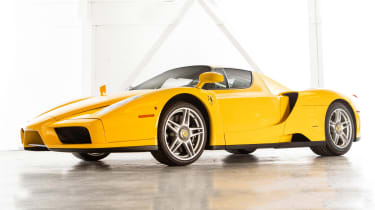 As if one exceptionally rare, limited-run V12 Lamborghini wasn’t enough, the sale also saw a Reventon Roadster pass through its hands. The 2010 example was one of just 15 ever built, had 2400km on the clock and sold for £1.6m.

Should you have any grasp of the value of the world’s most sought-after hypercars, it may come as a surprise to hear that a Porsche 918 Spyder sold for the same amount (£1.27m) as an Aston Martin One-77, a significantly rarer model with a naturally aspirated V12 under the bonnet. Perhaps hybrids aren’t so bad after all...