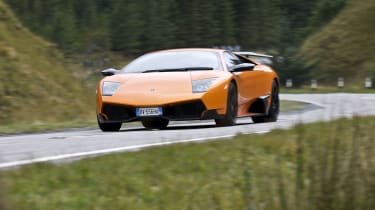 Remarkably, the 212mph Murciélago SV isn’t the fastest car at this year’s eCoty. But it could well be the wildest ride, the seat to be in if you want your sensible world coordinates shredded and blown away. SV stands for Super Veloce and Lamborghini has never undersold the meaning of the letters when applying them to the swansong edition of an already potent car. This time they belong to a leaner, granite-knuckled version of the Murciélago LP640. It might just be the greatest Lambo ever.

The modest 29 horsepower hike (making 661bhp or 670PS) looks a lot more impressive in conjunction with the 100kg drop in weight. Factor in a bodyshell, aerodynamics and suspension all extensively reworked to generate more grip, and Lamborghini’s argument that the SV actually needs its four-wheel drive to make good on the extra potential doesn’t seem quite so fatuous. The headline performance figures – 0-62mph in 3.2sec, the ton in 7.3 and a top speed of 212mph (or 209mph with the optional larger Aeropack wing fitted to our dazzling metallic orange example) – certainly help distance the SV from other supercars.

But it’s the subjective experience, the way the SV hammers so much immediacy and raw excitement into the usual supercar mix,  that’s altogether more extraordinary, relentless and all-consuming. The noise, the bite, the response, the grip, the braking power: all are delivered with an unfiltered intensity that’ll be hard for anything to match.

Position four verdictFourth goes to the LP670-4 SV, a damned exciting and accomplished supercar that comes with a heavy does of drama in all the important areas – styling, ambience, performance and noise. ‘What a glorious, unreconstructed, old- school supercar,’ says Marriage. And what an effective one, too, inspiring confidence to revel in the sound and fury of the sensational V12. ‘Yes, the Noble made it feel clumsy in a couple of areas – you could tell it was a much heavier car, for instance – but what we loved about the SV was its attitude, its sheer OTT-ness. And for us, a natural V12 beats turbo V8 every time. At least when it’s done this well.’