Life is never dull for Simon George and his Murcielago, with the green lobby, neighbours and local police all targetting his Lambo 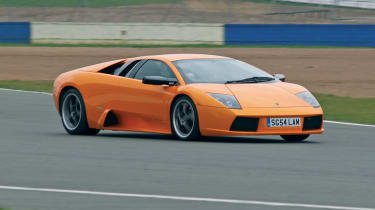 I’m not sure whether it’s commendable or just plain daft to put 40,000 miles on a Murciélago in just 30 months; it probably depends on whether you’re speaking to a bank manager or a car nut. But two things are certain: apart from the financial headaches caused by trying to justify it, it’s been the most enjoyable two and a half years of motoring I’ve ever had, and considering this Lambo has completed over 6500 miles of hard track use in that time, it has been incredibly reliable. Hats off to Audi-owned Lamborghini.

The Murciélago has had its tin hat on again this month, though. Firstly I read in the news that it’s the second worst car in the emissions table. (Well, it’s never going to beat a Toyota Prius, is it?) Then on top of that I got a brown envelope through the door from my loony local council warning of court action over noise pollution!

Apparently ‘a local resident has alleged she cannot hear her wireless over the sound of your car’. Why anyone would want to listen to ‘a wireless’ over the melodic sound of an Italian V12 is beyond me, although I suspect that the way the establishment views supercar ownership as somewhat politically incorrect has something to do with the complaint being sent out. Needless to say, I won’t be taking the Tubi off to satisfy the bureaucrats. I’ll let you know what happens.

Now, you may be under the impression that the current range of Lamborghinis all have permanent four-wheel drive. I know I was. So you can imagine my surprise when, during a recent day at Silverstone, the guys at WRC Technologies found the Murciélago’s front wheels resolutely refused to move on their dyno’s rollers. The rears span perfectly, though, which had the WRC technicians and the watching crowd of fellow Lambo enthusiasts scratching their heads.

Even with two-wheel drive the Murciélago strained angrily at the straps as I retreated to the toilet next door. I was sort of hoping that the explanation could be that the factory had produced a ‘one off’ special two-wheel-drive Sport Veloce, and that SG54 was this very beast. Alas it was not to be. The boys at Lambo Manchester later explained that the front axle needs some resistance before the Viscous Traction system will engage.

The highlight of that day at Silverstone was undoubtedly when a brave evo reader handed me the keys to his beautiful 6-litre Diablo – one of the very last, finished in the same colour as my Murciélago. Although it felt a little more raw and had a little less room inside, I was amazed by how similar it was to drive. The two are unmistakably cut from the same Sant’Agata cloth.

On the subject of matching colour schemes, a Gallardo-owning friend had an interesting encounter with a Ford Ka on the way over to Silverstone. The picture (below, middle) speaks for itself, but needless to say I’m now having second thoughts about re-applying the Viper stripes to my car!

Finally this month, I’ve had another run-in with the local constabulary. It was all very friendly, though, and after a quick look under the engine lid and a polite request to rev the V12 for their ringtones, I was on my way again. I haven’t had a bad experience with the police yet. Let’s hope it stays that way.