Mazda MX-5 RF review - Targa roof adds refinement, but not at the cost of fun 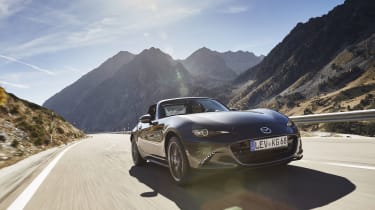 The MX-5 RF is a more grown-up, more sophisticated variant of Mazda’s best-selling sports car. The biggest difference between the RF and the regular convertible roadster is the former's new targa-style electric folding metal roof. The more substantial top not only turns the MX-5 into an elegant coupe when the roof is up, but it’s also designed to make the RF quieter and more refined inside. The RF’s distinctive rear buttresses remain even when the roof has been lowered, too.

It’s the roof operation that really steals the show. The elaborate display starts with the rear buttresses rising up before the roof panel separates from the windscreen’s frame and splits in two – there's no need to unhook the roof from the header rail manually. The two roof panels fold on top of one another as they slide behind the occupants’ heads and the buttresses retain to their originally position and cover the roof panels.

This piece of mechanical drama takes only 13 seconds to open and close, significantly longer than it takes to operate the standard manual roof. The electric roof can also be operated when on the move too, but it does so only at speeds up to 6mph.

The new RF is powered by the same 1.5 and 2-litre four-cylinder engines as those found in the MX-5 roadster. The 1.5 produces an identical 129bhp and 111lb ft of torque, the larger capacity motor generating 158bhp and 147lb ft. Unfortunately the RF’s performance figures are stunted a little. That new roof adds 45kg to the car’s kerb weight, in turn increasing the RF’s 0-62mph time by 0.3sec to 8.6sec for the 1.5-litre 8.6sec while the 2-litre car is 0.1sec slower at 7.4sec.

To complement the quieter cabin the RF can be equipped with an automatic gearbox. It’s a six-speed, torque converter and is currently unique to the RF, but it could be available across the MX-5 range soon. The MX-5 roadster's six-speed manual is the standard transmission. 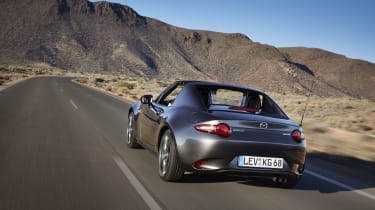 Without driving the RF back-to-back with the MX-5 roadster it is difficult to distinguish them from one another. The 2-litre RF we tested was just as fun as the soft-top version, being playful on the throttle with just enough adjustability through tighter corners.

There’s still a touch more body roll than you are expecting but, rather than being a hindrance, this helps you gauge how hard you can push the RF. Rush the chassis and you can trick the little Mazda into understeer, but be patient and allow the car to settle onto its outside rear tyre before you jump on the throttle and the throttle is as useful at getting you round a corner as the steering. When you get it right, it is extremely satisfying.

On the Spanish roads of our test route the metal roof seemed to add some structural rigidity to the MX-5’s body - the constant tremors that often pass through the roadster are muted here. Despite a few rough sections the roads weren’t as demanding as those in the UK in terms of surface changes and cambers though, and we’ll have to wait to be confident enough to claim the RF is appreciably stiffer.

The cabin remains is basic and functional, with big dials and switches that make it easy and intuitive to operate the heater and infotainment controls. But, this lack of gadgetry and luxury might work in the back-to-basics MX-5, but it seems a missed opportunity to make the supposedly more lavish RF’s interior exactly the same.

The new roof does make for a slightly more refined cabin when it’s closed, but the cloth roof of the ordinary MX-5 is hardly noisy or crude. However, when the RF's roof is open there’s a significant amount of wind noise at 60mph and over. Annoyingly, the noise emanates from an area very close to your head. 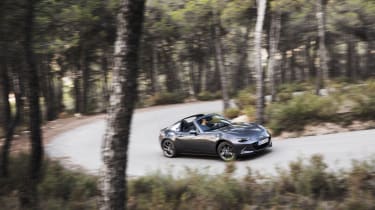 The RF is approximately £2000 more expensive than the MX-5 Roadster, with the cheapest 1.5-litre model available from £22,195. The 2-litre RF is just £900 more at £23,095 and not only comes with more power but a limited slip differential as standard.

The trend for folding metal roofs has started to dwindle in recent years with only a small number of premium brands still favouring them, notably BMW and Mercedes. As such, there are no obvious rivals to the RF.

Toyota’s GT86, despite being a proper coupe, isn’t as refined or as comfortable as the Mazda. The RF’s interior isn’t exactly plush, but it’s much nicer than the cheap and naff cockpit of the Toyota. However, the GT86 is a much sharper and more entertaining car to drive quickly; it offers similar rear-wheel drive characteristics to the RF, but the Toyota is more responsive, feels lighter and maintains its composure closer to the limit.

> Click here to read our review of the Toyota GT86

If it’s open top motoring you crave then the RF’s nearest rivals are its close relations. The soft-top MX-5 is less of a compromise than the RF, it's just as fun to drive, hardly any less comfortable and it’s also cheaper.

The Abarth 124 Spider is also worth considering, it shares the same underpinnings but its turbocharged 1.4-litre engine is more powerful, and the entire car, from the way it looks and sounds to the way it drives, is more fun.

> Click here to read our review of the Abarth 124 Spider