New Artura to pack a hybrid V6, 600LT performance and only a double-digit weight increase over the 570S 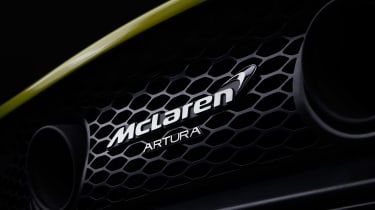 McLaren has confirmed its new series-production hybrid supercar will be called Artura, breaking with the usual numerical naming convention which has been in use since McLaren Automotive’s first model, the MP4-12C. It’s also expected that the new McLaren Artura will be the next model to diverge from McLaren’s Sports and Super Series, after the GT’s break from the naming convention back in 2018.

The Artura will replace the current 570S in the first half of 2021, and sit between the current GT and 720S models, commanding a higher price tag and power figure than the current Sports Series cars. 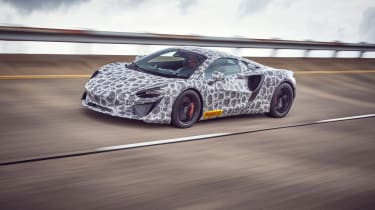 The new High Performance Hybrid models will all feature McLaren’s new Carbon Lightweight Architecture (MCLA), which has been designed to be more adaptable than the outgoing MonoCell tub, allowing the company to produce a wider variety of models. As with the MonoCell, the new chassis will consist of the floor, side rails and firewall, and still feature aluminium subframes on both ends to carry the axles and powertrain.

The new chassis will be laid, pressed and autoclaved at the new McLaren Composite Technology Centre (MCTC) near Sheffield in a more production-efficient process that aims to cut the amount of time required to produce each unit. 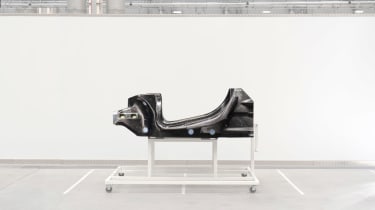 Engineers have designed the chassis to be more flexible than the MonoCell, allowing designers and product planners the freedom to create more widely differentiated models (an often criticised element of the current range) and enabling the use of a wider range of both internal combustion and full-electric powertrains.

The first model built on McLaren’s new architecture will be the Artura, which alongside its new platform will also replace the previous Ricardo-built twin-turbo V8 engine for an all-new twin-turbo V6, also supplied by Ricardo, bolstered by the plug-in hybrid system.

The new powertrain will allow for up to 18.6 miles of electric-only drive, which requires a reasonably substantial battery pack, but McLaren has confirmed the car will only have a double-digit weight increase over the current 570S, suggesting it will weigh somewhere in the region of 1450kg to 1550kg with fluids. 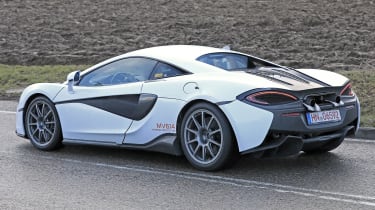 Total system power for the new model is said to be up on the 570S’s 562bhp, and closer to that of the 600LT, which will come despite an subtle double-digit increase in mass.

Mike Flewitt, McLaren Automotive CEO, is confident about the new tech, elaborating ‘the new ground-breaking vehicle architecture is every bit as revolutionary as the MonoCell chassis we introduced with the company’s first car, the MP4-12C, when we first embarked on making production vehicles a decade ago.

‘This new, ultra-lightweight carbonfibre chassis boasts greater structural integrity and higher levels of quality than ever before, with our new MCTC facility quickly becoming recognised as a global centre of excellence in composite materials science and manufacturing.

‘Our advanced expertise in lightweight composites processes and manufacturing, combined with our experience in cutting-edge battery technology and high-performance hybrid propulsion systems, means we are ideally placed to deliver to customers levels of electrified high-performance motoring that until now have simply been unattainable.’

The Artura will also introduce a new take on McLaren’s design language under the design leadership of Rob Melville. McLaren has already given us an early look at the new generation of design inside and out with the Elva, a model that shares some interior design elements and features with this next-generation supercar. In these images, it’s clear the new model will have deep rear-haunch intakes to suit the different engineering package beneath the skin, but those McLaren trademarks of a deep windscreen, airy cabin and slim LED rear lights will remain core to the model’s design. 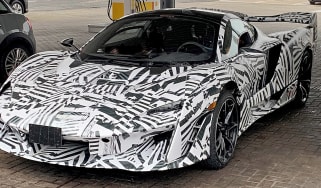 Featuring a bit of Speedtail and a bit of Senna, McLaren’s Sabre might just be the ultimate modern McLaren
McLaren 765LT 2020 review – latest Long Tail returns to reset the status quo

McLaren’s latest Long Tail fulfills its brief in once again pushing the supercar to the next level, the 765LT just has to prove its magic on the road …
McLaren 620R now available with £25,000 MSO ‘R Pack’