Cheaper and less complex, the Huracán Evo’s appeal has only grown with the adoption of rear-wheel drive 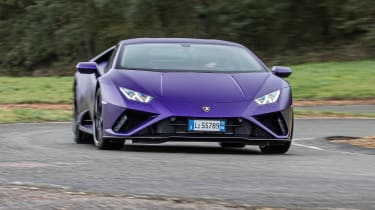 There’s a slightly unfair and contradictory assumption of modern Lamborghinis that they’re at once too capable, lacking the madness of old, and simultaneously too wild and showy, as if they’re aimed at people who care more about appearances than driving thrills.

Spend time with the Huracán Evo and you’ll wonder whether either viewpoint holds any validity. It’s a car bursting with far more character and style than any reskinned Audi jibes would have you believe, yet also a driver’s car deserving of a much better fate than bouncing off the limiter outside of Harrods. Now available in rear-wheel-drive form it’s also set to be the most driver-focused Huracán yet, while ditching some of the complexity has also brought down the price; surely a win-win. 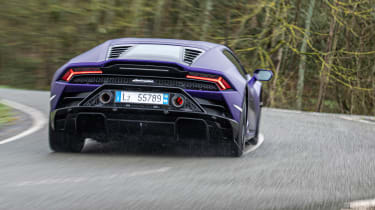 We’ve seen Lamborghini’s 5.2-litre V10 many times now but it’d be churlish to be anything other than positive about that fact, because it remains one of the most entertaining and spine-tingling engines fitted to any current production car.

In Evo RWD form the unit makes 610bhp, with 413lb ft of torque, and as the name implies the whole lot is sent to the rear wheels alone, via a seven-speed dual-clutch transmission, just as it does in the identically motivated Audi R8. You get a little more theatre from Lamborghini of course though; the V10 has never sounded this angry in an R8, and the plastic toys that Audi uses as gearchange paddles aren’t a patch on the large, slim carbonfibre structures in the Huracán.

With two fewer driven wheels the RWD does lose out to the all-wheel-drive Evo on the 0-62mph dash, but a 3.3sec run to the regular car’s 2.9 is hardly disastrous, and the 201mph top speed remains unchanged. 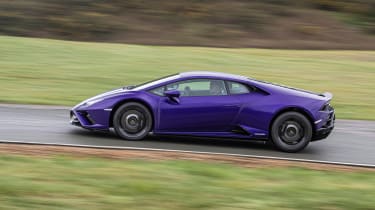 Without drive to the front wheels the Huracán Evo RWD is a simpler car than its all-wheel-drive counterpart. There’s no four-wheel steering, no torque vectoring, and instead the transition to rear-drive is being managed mainly by new tuning for the car’s traction and stability control systems, aimed at harnessing the 610bhp output through just a pair of wheels.

Driving modes remain the same as before, with Strada, Sport and Corsa options, though contrary to expectation Corsa isn’t the everything-off loopy setting but instead uses electronics to maximise traction on track, deploying power in a smoother way than previous rear-drive Huracáns. Sport is the mode that allows greater slip (though can still rein in excess) while also tensing up (on this car) the electronic dampers and opening the exhaust valves. 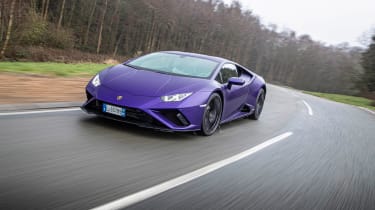 Despite fundamentally similar hard points to the R8, the Huracán looks and feels little like its cousin, and could be at its best in Evo form, without some of the overwrought accessories of the Performante. Inside it’s every inch a Lamborghini, from the windscreen stretching over the front axle to the laid-back dashboard and barmy hexagonal detailing everywhere you look.

Naturally there’s a flare of revs on start-up and a bassy hum behind your head, Lamborghini seemingly finding loopholes in EU noise regulations other car manufacturers haven’t. Or maybe it’s just ignoring them, which would be a very Lamborghini thing to do. Otherwise the Huracán is docile, mooching around easily, with good throttle response, smooth dual-clutch shifting and surprisingly little resistance over bumps and rough tarmac.

Amazing how natural it feels when you pick up the pace too. Like the similar R8 the Huracán’s steering has improved over time. The weighting remains a little artificial but the response is now predictable, and with such an expansive view forward it’s not long before you’re threading accurately through corners and forgetting about its 1.9-metre-plus width. 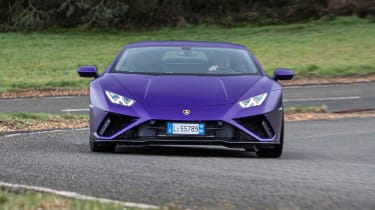 The V10 remains pretty special too. The full performance is, frankly, more than you could ever safely deploy on the road, but you can appreciate its response and linear build-up of power at any speed, along with the speed at which the DCT will flip between gears, up or down, with each brush of a skeletal carbon paddle.

Despite driving only the rear wheels it makes the Huracán Evo feel friendlier than you’d expect, without the risk of suddenly overwhelming the tyres. It’s not a car to get moving around on the road, but you sense a car that could be great fun on a circuit, letting you build up to its limits progressively.

In Sport mode the car relaxes some of the stability and traction systems, but on dry roads at least it feels no more edgy than in Strada, just more tense over bumps and even sharper on the throttle. And much, much louder. Valves open, there’s probably not a lot of restriction between the cylinders and the outside world…

There are, of course, a few quirks. Left in Strada and the gearbox in auto the car will happily change up itself, but cruise through a roundabout and squeeze the power and you get nothing, the engine down at 1000rpm and the gearbox in seventh. Why does it not change down? Who knows, but whoever programmed that is probably friends with whoever designed the seats, which seem to place your whole weight on the base of your spine, making driving for any more than 30 minutes or so an increasingly debilitating affair.

The rear-drive Huracán Evo starts at £165,256, putting it more than £30,000 less than the all-wheel-drive model. With little lost in terms of performance or driver appeal the RWD seems like a no-brainer, even if list price is less of a deciding factor in this segment of the market than it might be further down. Perhaps most pertinently, it brings the Huracán Evo towards the same ballpark as the £142,695 Audi R8 Performance, and given the choice of the Lamborghini or the Audi, we’d be sorely tempted by the former.