Mercedes-AMG’s A35 successfully feels like a first step on the AMG ladder, but as the A45 S proves, the A-class has plenty more to give 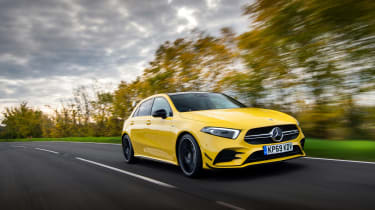 While few of us at evo had much enthusiasm for the original A45 AMG, that’s not to say we don’t acknowledge its place in the history of the hot hatch genre. In terms of power and performance – not to mention pricing – it sent the numbers soaring.

Moreover, the car also shifted preconceptions internally at Mercedes-Benz and, crucially, within AMG. Far from being a dangerous stretch downwards for the Affalterbach brand, the ‘45’ family eventually sold twice the number of AMG’s original – and as it turned out, rather pessimistic – prediction

> Click here for our review of the VW Golf R

So this time around AMG has shifted tactics and invested more money. This new A35 model is the more accessible younger brother of the latest A45, and is aimed squarely at the hugely successful Golf R.

This has left plenty of space for the more extreme, and undeniably brilliant new A45 S, but does this more demure A35 share the 45’s finesse and capability but with a discount of more than £10k? Well yes, and no. 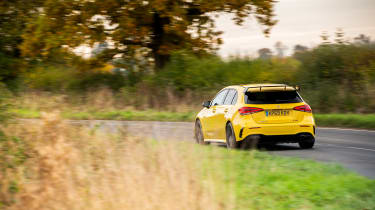 The A35 uses a heavily developed version of the M260 engine used in the A250 hatch, not the bespoke AMG M139 engine from the new 415bhp A45 S. For this application the standard turbo has been replaced by a twin-scroll item, and the intake air is cooled via an air-to-water intercooler, not the A250’s air-to-air type.

The A35’s 302bhp just shades the Golf R’s (recently downgraded due to WLTP regs) 296bhp, and is complemented by 295lb ft of torque. Combined with a twin-clutch, seven-speed gearbox and four-wheel drive, it’s no surprise that the performance figures are strong: 0-62mph takes just 4.7sec, and the top speed is limited to 155mph.

Virtually no component in the car’s suspension is carried over from the regular A-class, with redesigned joints and lower wishbones combined with careful development of the bushes and even the use of metal bearings on the lower front arms for more steering precision. The rear subframe is now solidly mounted to the body, while the steering rack is also new, as are the beefy brakes with monobloc four-piston calipers up front. There’s a stiffer structure to work with, too, courtesy of an aluminium shear under-panel beneath the engine, assisted by bracing bars.

The four-wheel-drive system now uses an electro-mechanical clutch on the rear axle, but does without the A45 S’s trick torque-vectoring rear differential or ‘drift mode’. The A35 is 100 per cent front-wheel drive in steady running, but up to 50 per cent of torque can be sent to the rear axle. There are five driving modes (Slippery, Comfort, Sport, Sport+ and Individual), and in the more aggressive of these settings the AMG Dynamics system uses the ESP and torque vectoring to aid corner turn-in. There’s a bespoke tyre for the car, too: an 18- or 19-inch Pirelli P Zero. 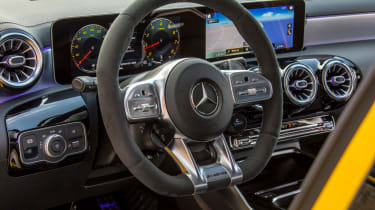 Squat, punchy, and looking every inch the upmarket German hatchback fed protein shakes, it’s immediately obvious the traditional ‘hot hatch’ label is going to woefully undersell a car like the new A35. In the metal, the design is more cohesive than that of the old A45, and the optional aero kit now better integrated – if no less attention-grabbing.

Open the driver’s door, settle into the slightly too high seat, and take in the giant one-piece slab of (optional) MBUX tablet display, fancy neon-esque interior lighting, and swathes of Alcantara and (fake) aluminium. There’s also AMG’s new steering wheel, with the option of its own driver mode, damper and ESP switches, all of which positions the A35 in a totally different orbit to more traditional examples of the hot hatch breed.

But what really matters is how it drives, and straight away you can feel the progress compared to the flat-footed original AMG A-class. In Comfort mode the A35 is reserved, and there’s confirmation that the engineers’ work to broaden the range of suspension settings has been at least partly successful: it’s still a firm-riding car, but you can sense there’s pliancy here. The steering is light and relatively mute in its feedback, but it’s also nicely progressive and accurate – the car heading exactly where you place it. 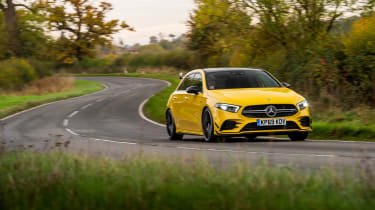 Switch to a more aggressive setting and the A35 shifts character considerably. The exhaust opens up and the motor chomps enthusiastically through the gears, although there’s a hint of lethargy in the mid-range. It’s hard to say exactly why this is – the A35 certainly isn’t a light car, but perhaps it’s because by its own admission AMG has mapped the engine to maintain power at high revs, so you do need to wring it out to feel the full force of its performance.

Driven hard the A35’s immense traction, impressive braking and undoubted agility mean it covers ground at an astonishing rate. It’s a more grown-up experience than that of the terrier-like hot hatches of old, but it does feel hugely capable. As road surfaces deteriorate, the A35’s inherent chassis stiffness keeps the car composed and controlled, even if the lack of tyre-wall on cars with 19-inch wheels does transmit sharper road intrusions into the cabin. Cars in the UK only combine the larger 19-inch wheel option with adaptive dampers, which does widen the A35’s comfort zone compared to versions without. But on the right road, in the right mode, the entry-level AMG is highly entertaining and finally feels like a properly executed hot hatchback. The A45 S takes this excitement much further, which speaks volumes about the underlying chassis, but it does leave you desperately doing the maths to figure out how to raise the extra funds required to jump to the most potent A-class...

At £36,695 the A35 costs within a few hundred pounds of its main rivals from BMW, Audi and Volkswagen. Standard equipment is strong, but like many German manufacturers, Mercedes now bundles its options into packages that can in one fell swoop significantly increase the price point. In the A35, the £6000 AMG Premium Plus package is expensive, but adds plenty of toys, including electric seats, a panoramic roof, adaptive dampers, Burmester hi-fi, multibeam LED headlights, the Black and Aero kits, 19-inch wheels, and the full-width MBUX driver’s display. The lesser £2500 AMG Premium pack only bundles the tech additions, but still lifts the interior if the full package is a little rich. 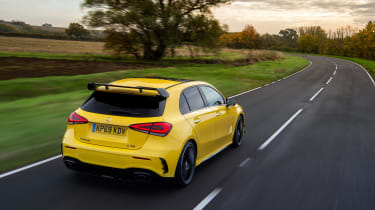 The A35 was specifically designed to enter the VW Golf R’s niche, but the Volkswagen’s imminent replacement means dealer stock is all that remains of the outgoing R. Instead, for now the new A35 has the £36,430 BMW M135i to compete with, which has near-identical power and price points to the Merc. Get beyond the BMW’s awkward looks and you’ll find it’s actually far less entertaining to drive, even if it is more refined.

The A35’s two biggest competitors are still to come, however, with the all-new Golf R arriving during 2020 and a new Audi S3 to be revealed in the coming months.