All the news, pictures and videos direct from the 2014 Detroit motor show. 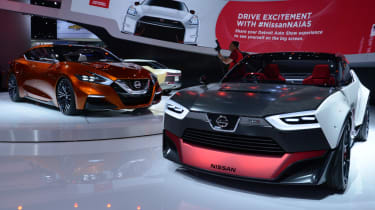 Detroit is the motor capital of the United States, and over 13-26 January plays host the 26th North American Auto Show, the first major motor show of 2014. The show is now in full swing, with many new launches from US, European and Japanese manufacturers.

Lexus is at the show with an all-new 450bhp version of its new RC-F Coupe. The naturally aspirated V8 engine is said to be the most powerful the company has ever produced, with its sights well and truly set on the new BMW M4 Coupe. Production versions of the M3 and M4 are also on show for the first time on the BMW stand. Porsche has also pulled the wraps off a new retro-look 911 Targa.

Toyota has already unveiled a new concept car, called the FT-1, which could point to how the long-awaited Supra replacement could look. Subaru is at the show with a new hotter STI version of the recently revealed WRX saloon. We’re expecting more than 300bhp and some suspension and brake upgrades, although there’s still doubt hanging over the Subaru’s future in Europe.

The smallest SUV in Mercedes’ line-up, the A-Class-based GLA, has received the full AMG treatment. Full details of the GLA 45 have already been released, with the car making its first public appearance at the show. Based around the same four-wheel drive running gear and stonking 2.0-litre four-cylinder turbo engine as the A45 and CLA 45, the GLA is not far off the devastating pace of its smaller siblings. The company is also be showing its new C-Class saloon and V12 S600.

Chevrolet has unveiled the 2015 Corvette Z06, the most extreme and track-focussed version of America’s affordable supercar. Powered by GM's new supercharged 6.2-litre 'LT4' V8, somewhere in the region of 625bhp has been confirmed.

Volvo will be pulling the wraps off another one of its futuristic designs, showcasing the company’s new SPA, with a look at the direction of Volvo’s future designs. The Volvo Concept XC Coupe is the second of three such concepts, following on from last year’s Concept Coupe.