evo spends a day at the Porsche Experience Centre at Silverstone 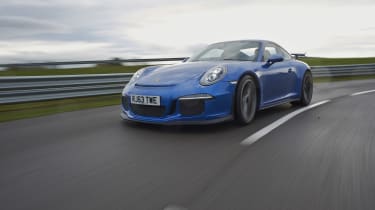 I’m leering over a Porsche RS Spyder but it might as well be a smelly old RS Fiesta. What’s more, the duck-tailed 2.7 RS I passed by on the way in from the car park is merely a distant memory, and as for the newly minted turbocharged Carrera in the adjacent room, well, frankly I couldn’t give a toss.

No, the car to which my imagination is so firmly shackled is a Sapphire Blue GT3 sitting outside in the icy drizzle. How so? Because it’s the only one of these wonderful cars I’ll actually be driving today, and also because it is a Porsche 991 GT3, arguably the finest sports car of an era peppered with memorable machinery. I’ve never driven one before, so you’ll appreciate that my brain chemistry is in a state of agitation.

Affording us this opportunity is Porsche’s Silverstone Experience Centre – part boot camp for anyone who takes driving seriously and part duty of care to new owners who may need a gentle introduction to the world of big power outputs. We’re going to try out almost everything it has to offer – the low-friction skidpan, the kick plate, the handling circuit, the straights, and finally laps of Silverstone itself – as part of the Sport Driving School’s day-long ‘Precision’ course. The course costs a not insignificant £760, but there’s a lot of wheel twirling involved. 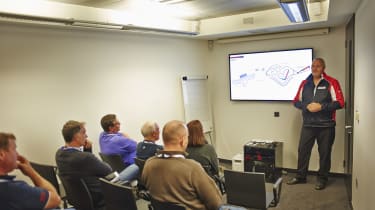 Built in the same pillbox style in which Porsche erects its dealerships, the centre’s nucleus overlooks the GP circuit’s Hangar Straight and some of the purpose-built tracks. Inside it’s spotlessly clean – no surprises there – and there’s a restaurant overlooking the facility that serves deliberately small but fantastically tasty portions of the healthy food you’d imagine Nick Tandy and his colleagues wolf down after a sweaty three-hour testing stint. Incidentally, the room below the restaurant is where 918 Spyder owners collect their new plug-in hybrid.

It’s a busy place, too. Whether they’re demonstrating to Macan owners how the car’s electronic brake distribution keeps everything pointing the right direction during an emergency stop, or diplomatically putting it to a wealthy novice that trail braking is a bit fiddly in a GT2 RS, uniformed driving coaches abound. They’re unfailingly friendly and come from a variety of backgrounds.

Very impressive backgrounds, in some cases. In fact I’ve already stumbled across Barry Horne, the former Carrera Cup GB champ, and, remarkably, Richard Attwood. Deploying a Le Mans winner to teach hill-hold in a diesel Cayenne really is taking a gun to a knife fight, or indeed a reliable 917 to an endurance race, isn’t it?