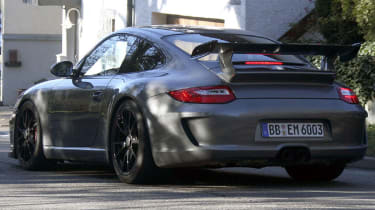 Our eCoty 2007 is out testing once again, with a host of revisions from the recently updated 911 Carreras and Targa set to be drafted across to the top end of the 997 range, the trackcar-for-the-road GT3 RS.The 409bhp, 193mph model did enough to beat off the Ferrari Scuderia and Audi R8 little over a year ago, and so it hardly needs much an overhaul.

Changes are likely to amount to tweaked lights and bumpers to make sure its styling matches the rest of the 997 range, while its engine may get direct injection to perk up its performance a little and clean up the emissions, although this will likely be of less importance than on the entry-level cars.

The appearance of PDK, Porsches double-clutch auto, is a possibility although that may not happen until the 998 iteration of the 911, which has already begun testing in preparation for its 2011 unveil. Otherwise, it's business as usual for the GT3 RS, with a polycarbonate rear window, carbon fibre rear wing and GT3 livery and paint hues.

Expect to be able to buy an updated RS from Summer 2009.