Everything you need to look out for when buying a used Porsche 997. 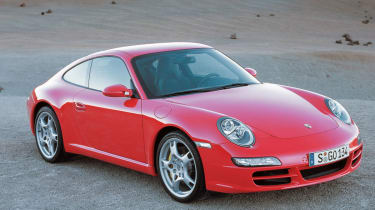 Early 997s have a reputation for lunching engines, but according to Jonas Zambakides, MD of Porsche specialists JZM, the picture is nowhere near as bad as sometimes painted on the forums. The two known issues with the gen-1 (2004-2008) flat-six are scored cylinder bores and the failure of a bearing at the end of the intermediate shaft that drives the camshafts. Both can result in engine failure and a rebuild could cost up to ten grand.

Bearing failures are impossible to detect until they happen, but the good news is they are increasingly rarely seen these days. Scored bores are slightly more common, particularly with the 3.8, but there are clues in blackened tailpipes and/or a ticking noise at idle – if you encounter either, walk away. Peter Morgan of porscheinspections.com uses an endoscope to check for damage.Both Jonas and Peter stress the importance of having the engine’s black box interrogated to check for over-revving and also to confirm the true mileage.

Gen-2 cars tend not to be afflicted by the above; same goes for the Turbos and GT models, which use a different engine.

Both the six-speed manual and the five-speed Tiptronic are robust. Clutches also last well – up to 50,000 miles.

Check for corrosion on the inner disc faces – caused by lack of use and not easily spotted. Ceramic brakes are brilliant but not really necessary unless you do a lot of track work, plus they’re formidably expensive. Squeaks from the front suspension point to bushes needing replacement – budget a couple of hundred pounds.

It’s common to respray the nose section to cover stone-chips, but if any other area has been resprayed, approach with caution – rust is not an issue with these cars yet. Check the condition of the aircon condensers and coolant rads, which are behind the vents in the nose and can be prone to pinhole leaks (replacement can cost over £1500). The interior is generally durable, but do check that all the electrical systems are working, particularly the PCM functions and PASM dampers.

Supplied by Design 911. Tyre prices from blackcircles.com. All prices include VAT at 20 per cent.

At the entry level to 997 ownership, a 3.6-litre Carrera is generally two or three grand cheaper than an S in similar condition. Privately owned C2s with average miles start at around £22-23K, while £25K should get you a good, clean, honest car from a dealer. An early Carrera S starts at around £25K, though a really nice example with a warranty from a specialist will be closer to £30K and upwards.

At the top end, a gen2 Carrera S will be over £40K, with the very best, late cars at around £50K. Buy from an Official Porsche Centre and you’ll also get the added peace of mind of an OPC warranty but you’ll obviously pay more.