With prices starting at a little over £20K, the Porsche 997 suddenly looks very appealing. Here's what you need to know 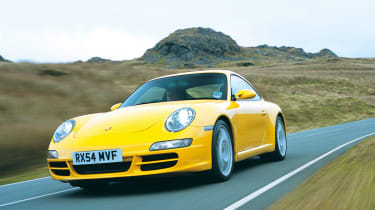 It’s an awesome machine, a mighty achievement. However, I’d be lying if I said part of me wasn’t shedding a wistful tear as more of the 911’s uniquely demanding character traits are erased.’ Not our verdict on the new 991, but the conclusion of our first drive of the 997 Carrera S back in 2004. Some things never change…

Of course, familiarity has taught us that the 997 had more than enough of all the things we love about the 911 breed. And although it’s the extreme, Motorsport-developed GT and RS models that have hogged the headlines in recent years, the basic 997 Carrera and its more powerful Carrera S sibling are scintillating drivers’ cars in their own right. With the 991 attracting flak for its electrically assisted steering, 997 prices may even start to harden. In short there’s never been a better time to buy. But which are the best versions, which of the many options are desirable, and what goes wrong?

To recap, the 997 was launched in September 2004 in Carrera and Carrera S guises, the former with a 321bhp 3.6-litre version of the water-cooled flat-six from the 996, the latter a 350bhp 3.8-litre version of the same engine. Although the range was soon expanded to include other variants, it’s these two we’ll concentrate on here.

The S outsold the regular Carrera by roughly three to one: it’s a seriously quick car and it’s the one that most enthusiasts want, though you shouldn’t dismiss the 3.6. It still has more than enough power to put a smile on your face and can be the greater bargain; marque experts say they also see fewer problems with the smaller engine…

The 997 was dripping with technology. The S had the new PASM switchable adaptive damping as standard; both cars had variable-ratio steering and PSM stability control, and then there was the optional Sport Chrono pack, which as well as the slightly gimmicky dash-mounted stopwatch offered a Sport button, which tautened the throttle and the damping while loosening PSM’s reins. Slightly confusingly, there was also a Sport chassis option, which lowered the ride by 20mm and added a limited-slip diff. The gearbox choices were a new six-speed manual or the familiar five-speed Tiptronic auto.

The tech worked too – in road tests we could detect tangible benefits from switching PASM to its firmer setting, while pressing the Sport button sharpened the dynamics a treat. Another worthwhile option at resale time is PCM (Porsche Communication Management), which combines an upmarket hi-fi with the factory-fit satnav.

The all-wheel-drive Carrera 4 and 4S versions (the latter another firm evo favourite) arrived in November 2005, Turbo and GT3 derivatives in 2006, and there were also Targa and Cabriolet variants, but the next big development in this story was the launch of the second-gen 997 for the 2009 model-year. The engine was heavily revised, now boasting direct injection and VarioCam Plus valvegear, and power was up – a formidable 380bhp for the Carrera S, lifting its top speed to 186mph and cutting its 0-60 to the low-4s. The gen-2 also saw the introduction of the PDK twin-clutch auto as an option and a myriad of detail improvements.

The critical difference was that the revised engine suffered none of the problems that are known to afflict early 997s (see Checkpoints). These later cars are, of course, substantially more expensive. If your budget is below £30K, you’ll be looking at a gen-1 997, which is still a mouth-watering prospect – you just need to be aware of the potential problems.

We’d advise either buying from one of the leading independent 911 specialists like JZM, Paragon, RSJ Sports Cars, Autofarm, Autobahn or 911 Virgin, or if buying privately, paying an expert to survey your prospective purchase. Peter Morgan (porscheinspections.com) charges £350 for a full survey, while if you want total peace of mind you can get an official Porsche warranty for any car up to eight years old for around £1400 a year, though it will have to be to completely original factory spec. As with any high-performance car, look at plenty and buy the best you can afford. Happy hunting.

Mark Lawton - ‘I had a Boxster S as a weekend car and was planning to buy a V8 M3 next when my girlfriend sent me to the Porsche Experience Centre at Silverstone for my birthday. Having enjoyed a 911 on the handling course, things moved up a notch!

I started looking for a Carrera 2S, partially for the extra top-end power and mid-range torque of the 3.8-litre engine, but also for the improved spec – bigger brakes, 19in wheels, xenon lights and PASM.

After months looking for the right car, in November last year I put a deposit on a Cobalt Blue Carrera S at 911 Virgin. At just under four years old, with 36,000 miles on the clock, it was in stunning condition. I bought it with an engine warranty – the forums persuaded me that this was essential – and with it having had a major service at an Official Porsche Centre. Porsche servicing is pricey but maintains the value on newer cars.

What’s it like? Certainly faster than the Boxster, but much more of a handful to drive fast – the weight distribution always needs taking into account, but that’s part of the challenge! The power delivery is just fabulous.

Every time I sit in it, it just feels special in a way that none of my previous cars have managed, so I’m already planning to buy a newer model in 18 months’ time… maybe a GTS or a GT3, depending on funds!’