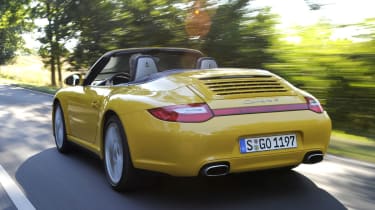 There are two kinds of Porsche 911. The first (and, by tradition, best) has a very specific, breed-defining role: to nail the ‘hard points’ in the range. We already have second-generation 997 versions of the Carrera and Carrera S, and there’ll be a new ballastic all-drive Turbo and lightweight GT3 taking care of the other extreme in a while.

But before they arrive, Porsche is rolling out the second kind of 911 – the kind shaped more by marketing pressures than engineering imperatives. The first wave comprises the Carrera 4 and slightly more potent C4S in both coupe and cabrio guises, these S versions marrying the heavy-duty mechanical and aesthetic elements from the Turbo (the four-wheel-drive system and the pumped-up bodywork) with the more modest entry-level naturally aspirated engines.

Funny thing is, the C4, and especially the C4S, are not without merit. All right, some of the C2’s agility and adjustability is customarily blunted by the bulkier undercarriage, but the 4wd, stiffer suspension and wider rubber that help keep the über-rapid Turbo on the island successfully endow the less potent variants with a more muscular character.

On my recent trip to Austria’s Grossglockner Pass (evo 121), the new (rear-drive) 997 Carrera S impressed deeply on two fronts: first, for the terrific poise and precision of its chassis, and second for the ease with which the 380bhp 3.8-litre version of the all-new direct-injection flat-six engine and the incredibly fast-shifting seven-speed PDK dual-clutch transmission enabled access to blinding pace. 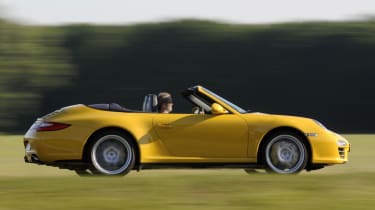 The combination in the new C4S is arguably better still, especially if you augment it with the lower Sports suspension and frankly astounding carbon-ceramic brakes. Both in a straight line – 0‑62mph in 4.3sec and 185mph, virtually old 996 Turbo quick – and as a tool for engaging the large handling circuit of Michelin’s vast test facility in East Germany, the attack-spec C4S is much less ragged on the limit than its predecessor would have been but, at the same time, curiously cold and clinical. The viscous clutch four-wheel-drive system of the old C4 has been supplanted by the torque-apportioning electronic hardware from the Turbo, which, aided by the latest version of PASM, massages the hero factor to the point where you’d have to do something tragically inept to bin it.

The big surprise, though, lay with the car we drove to the circuit – the plain vanilla 3.6-litre (341bhp) C4 Cabriolet, equipped with a six-speed manual gearbox rather than PDK. Hopelessly old school? Maybe, but none the worse for that. No, you don’t feel inclined to head for the nearest race track, but it’s certainly the sort of car you’d forego sleep for to savour an early morning blast on country roads. The bodyshell is sufficiently stiff to forget about on all but the bumpiest tarmac, the handling is satisfyingly incisive and grippy but without the uncompromisingly firm ride that comes with the Sports suspension, the 3.6 direct-injection motor is marginally sweeter and more musical than the 3.8 but still properly potent, and the manual gearchange cements a sense of connectedness with the driving process PDK misses by a mile.

It may not be anywhere close to the cutting edge, but of all the new second-generation 997 models, this one is destined to be the big seller.