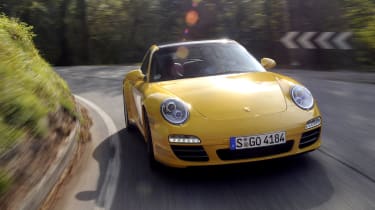 Four-wheel-drive variants of the new 911 outnumber rear-wheel-drive. Thought that would get your attention. Six plays four thanks to the new Targa, which, as last time, comes in two versions (standard and ‘S’) that are exclusively four-wheel-drive. Why so?

However, let’s dig a bit deeper. Thanks to its complex roof, the 1530kg manual Targa 4 is 60kg heavier than the Carrera 4 and only 25kg lighter than the Cabriolet. Let’s dwell on that a second, because 60kg (not to mention the additional £5550) is a substantial penalty to pay for a glorified sunroof, particularly since much of the extra weight is positioned in the worst possible place – up high.

A button by the handbrake allows you to slide the glass panel back half a metre in seven seconds. There’s also a mesh cover if you want to keep the light out, but there’s not much need for it, as the glass (described only as ‘special’) cuts down glare and heat. Roof-back buffeting is minimal; more problematic is rear visibility, as the panel slides back under the rear screen and the resulting double layer of glass means looking out the back is akin to peering through a very large fish tank, with everything tinged blue and slightly distorted. 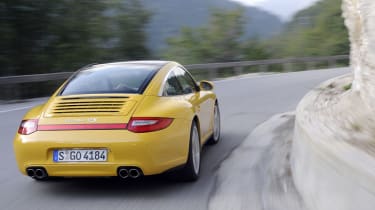 In fact the Targa’s best new feature isn’t the roof at all, but the fact it features a hatchback. Don’t sneer – the opening glass is useful. Flip the back seats down and you’ve got 230 litres of space – enough, I’m sure, to take a bag of golf sticks. Other Targa mods aren’t so successful. The reflective strip that links the rear light clusters is an unnecessary Americanisation and the pointed end to the windowline appears curiously disjointed, positioned above the round swell of the rear arch.

The wider haunches (up 44mm from the standard Carrera) do add visual meat, plus the bigger track widths enable the Targa to deal better with the raised centre of gravity. The perilously tight roads around Lake Garda in Northern Italy give the Targa ample opportunity to demonstrate its direction-changing abilities – not whip-crack sharp, but slick and scything. There’s certainly no hint of lurch, roll or any other nastiness, which is reassuring given that the Targa rides on softer springs. A by-product of that is a calmer nose –it doesn’t bob and sniff as much as the Carrera, but it also feels more numb. There’s oodles of clean and immediate traction, though, thanks to the electronic four-wheel-drive system.

The same applies to the Targa 4S we also tried – a car equipped with the optional PDK dual-clutch gearbox. Once again we remain to be convinced. Technically it’s very impressive, emotionally it fails to connect, physically it works the wrong way round. It served as a reminder that they’re ain’t much wrong with the manual. 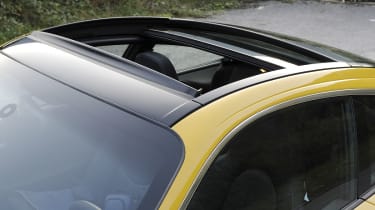 Nor is there much wrong with the Targa. But this is Porsche sleep-walking, doing what’s required to satisfy the 10 per cent of 911 buyers who crave a glass roof, but nothing more. It’s a perfect addition to the more sophisticated but less engaging new 911 range.