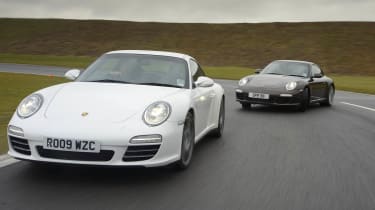 The C4S no longer uses a viscous coupling, instead the power is distributed by an electromagnetically controlled multi-plate clutch, able to shuffle the grunt around much faster and more effectively than before. In total the car weighs just 55kg more than the two-wheel drive Carrera.

It’s a couple of seconds faster around a damp lap of the Bedford Autodrome, and it feels as though it’s been set up for such conditions. The differences transfer in a similar way to greasy roads, C4S gives you more options than the 2 and there are fewer hairy moments when you’re waiting for the tyres to react to a cornering request. In short, most of the tactility and rewards of driving a Porsche 911 with a four-wheel-drive safety net.

The C2S requires a higher skill level in the winter than this 4, handing more of the task of getting it round the track to the driver. The purity of the rear-wheel driveset up means that on a warm summer day it would still be more fun and the lap time gap between the two would be considerably smaller. 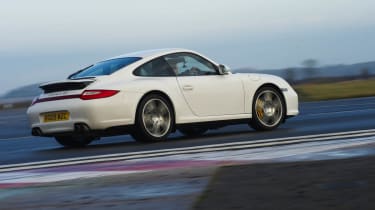 Porsche run a course at their Silverstone Performance centre where you can try both for yourself.