Porsche's 991 brought with it many changes, but was it at its best in basic manual Carrera form? 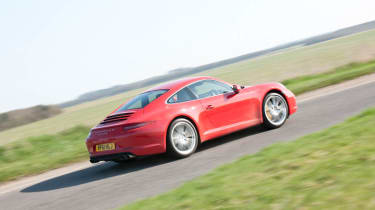 The junior and, on paper, purest member of the new Porsche 911 family. Question is, how many boxes do you tick on the extensive options list to create the optimum driving experience? With the 991, Porsche made the 911 longer and, now, mostly from aluminium. So it’s lighter, but the engines are slightly more powerful. It has a lower centre of gravity and a broader front track. And, perhaps, most significantly of all, it’s been designed to extract full value from all the sexy technology that forms the backbone of the options list. It isn’t that Porsche is particularly mean with its standard equipment these days, more the emergence of a carefully nurtured perception that the latest 911 isn’t the complete ticket without the supporting (extra cost) technology – the idea that dynamic engine mounts, torque vectoring, PASM, PDCC et al are as much part of Porsche’s core DNA as the 911 itself and you only get the Big Picture if you plug them all together.

Maybe so. Trouble is, apart from stumping up £71,449 for a notional zero option 3.4 manual, there’s no way of telling if our view that the clearest window on the true nature of a new car is to start at the bottom – and that the sweetest 911 is usually a simple one - still holds water.  The nearest Porsche GB’s Press fleet gets to slummin’ it in the lower reaches of the 911 range is this Guard’s Red 3.4 manual additionally equipped with 20-inch alloys, ceramic brakes, PASM adaptive damping with 20mm lower sports chassis, Porsche Torque Vectoring teamed with a mechanical limited slip diff, the Sport Chrono Package (which includes the dynamic engine mounts), a sports exhaust system and sports seats. But, perhaps crucially, no Porsche Dynamic Chassis Control (PDCC) active anti-roll system that stymied the Carrera S’s chances of victory in issue 168’s definitive group test. The thick end of £86k is rather a long way from where we started, but who’s to say Porsche hasn’t put together the optimum (pre-GT3/RS/Turbo) 991 package in this car? I was sceptical before I drove it, but now I can’t honestly think of anything I’d leave out. Guess that’s the hook.

Fundamentally, you want your 911 to go, steer, grip and stop in a properly stimulating manner. And in three out of four of these disciplines, Porsche GB’s idea of an entry-level 3.4, manual 991 is simply a better car than the base level 997 it replaces. The acoustically-enhanced soundtrack is gruffer and more urgent, roll-on pace (massaged by an almost turbo-like kick in the power deliver at 4500rpm) slightly swifter, the front-end grip and conviction generated by the wider track notably stronger and the stoppers marginally more incredible. The 991 throws in some extras, too: a more comfortable ride, less road roar, better cruising refinement and a properly designed, exceptionally well built and finished cabin.

All right, the electric steering only just wings it. Perhaps think of it as an MP3 version of the 997’s hydraulic set up. It gives the impression of having been tailored to snap-fit into the broader repertoire of the new car with its more nailed and composed front end and a torque vectoring system you can actually feel pointing you towards the apex when you're pushing on and haven’t turned the stability and traction programmes off. But it is accurate and it does have a helpful degree of feedback – just not as much or as textured in nature as a 997 GT3’s. It all adds to the hunch that the 911 has, once again, been ‘normalised’ for a more conventional definition of ‘excellence’; that its iconoclastic past is no longer seen as being so relevant.

So which Carrera, plain or S? Driving the 3.4 manual straight after a go in a ‘showhome-spec’ 3.8-litre Carrera S with PDK, PDCC and every other conceivable extra felt like a more direct path to whatever flavour of 911-ness the 991 is seeking to purvey, the mantra ‘less is more’ almost materialising before my very eyes as I gripped a steering wheel that was just that, pure and simple – no buttons at all. Although 50bhp down on the Carrera S, you don’t feel short-changed in the 3.4. And even if the 7-speed ‘box isn’t the slickest ever to grace a 911, it does provide another layer of rewarding interaction. In a 911, that can only be a good thing. 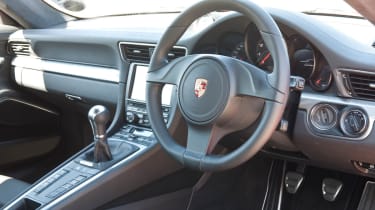