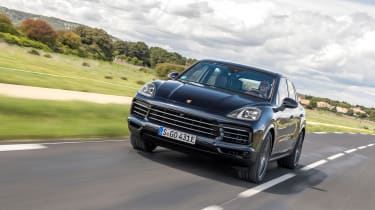 Hybrid SUVs might not be the most obvious types of cars for evo readers to get juiced about or, more to the point, want to drive. But as Porsche confirms the next 911 will be offered with a hybrid powertrain, its new all-new Cayenne Hybrid provides us with a glimpse as to how far the company’s electrified powertrains have come on.

Porsche learnt an awful lot about hybrids from the 918 Spyder project, most of which was still too fresh off the drawing board to have had much of an effect on the previous-generation Cayenne Hybrid. But this latest model benefits from some of that 918 know-how beneath its new, mildly restyled skin.

There are now four driving modes to choose from: full electric (E-Power), Hybrid Auto, Sport and Sport Plus, all of which can be selected via the same rotational switch fitted to the steering wheel of Porsche’s range of sports cars. The default mode on start-up is full electric, which offers a range of between 14 to 27 miles on a full charge (up from 22 miles, with a full charge taking around 8 hours on a house hold plug). Switch to Hybrid mode and the Cayenne will adapt its use of the powertrain to suit the individual driving style of whoever is behind the wheel, switching between full electric and petrol-electric as and when it needs to, and with uncanny smoothness, too. 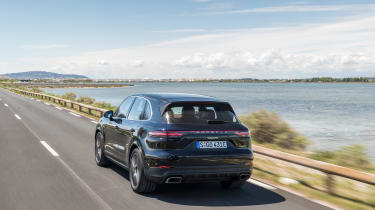 In Sport you get the petrol engine and the electric motor all the time, but not quite with the full beans maps for the throttle, eight-speed Tiptronic gearbox, steering or exhaust. And in Sport Plus mode you get the lot: all 456bhp every time you deploy the throttle, plus a more aggressive regeneration mode for the brakes, gearbox and so on that helps recharge the batteries much more quickly on the move. It all sounds complex, but once you’ve worked out which mode to be in and when, in reality it’s all surprisingly intuitive.

The petrol engine is a 3-litre V6 with a single turbocharger and produces 335bhp and over 332lb ft of torque (the Panamera Hybrid gets the smaller capacity, twin-turbo 2.9-litre V6). But add the effects of the 100kW electric motor – which, like the petrol engine, powers both front and rear wheels – and the numbers rise to 455bhp and 516lb ft, making this hybrid Cayenne considerably more potent than the similarly priced twin-turbo V6 S model (by 21bhp and 110lb ft). In fact, it’s closer to the Cayenne Turbo for torque (lagging 52lb ft behind), although with 542bhp the V8 has a fair bit more power. And less weight to lug around: the hybrid powertrain pushes the kerb weight up from 2020kg for the V6 S or 2175kg for the Turbo to 2295kg.

Even so, with launch control and PASM as standard for the E-Hybrid model, the performance is still pretty spectacular. Zero to 62mph takes 5.0sec and the top speed is 157mph (compared with 5.2sec and 164mph for the S). The gearbox is an eight-speed Tiptronic, not the full dual-clutch PDK used by the aforementioned Panamera, Porsche instead claiming that the regular Tiptronic works better and more smoothly when towing and for off-road use. 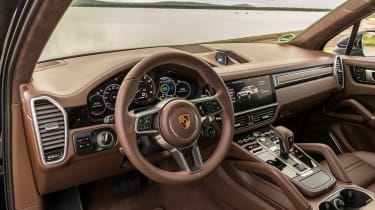 The Cayenne E-Hybrid will return a theoretical 88mpg on the combined cycle while emitting just 72g/km (putting it 3g/km under the free congestion charge limit).

A little bit baffling to begin with, for sure, but the further you go in it, the harder you drive it and the more time you spend scrolling through its various drive modes, the Cayenne E-Hybrid impresses far more than its predecessor ever did. For starters, it’s properly quick in Sport Plus mode, to a point where a Cayenne Turbo wouldn’t add that much more to its repertoire in a straight line, even if the V6-powered Hybrid might lack some aural clout beside the V8.

On the road the Cayenne Hybrid might be a complex machine to get your head round, but once you do it provides a broad range of appeal. By selecting the right modes and pressing the right buttons it really can switch from near-silent and spacious limousine to snarling, and very rapid, sporting SUV, and all sorts of different cars in-between. Be aware, however, because as soon as you use any of its performance the electric driving range disappears as quickly as the car accelerates.

Despite the hybrid system adding another 275kg to the kerb weight compared with the regular V6S, the handling, steering and braking are little removed from the regular Cayenne. Porsche’s active suspension (PASM) is fitted as standard to the Hybrid model and there’s the option of air suspension, too (fitted to the car we tried), and as a combination these elements help keep the extra mass of the E-Hybrid under control. The ride is still pretty firm even with the electronic dampers set to comfort, but the trade-off in handling crispness and steering precision is surely worth it. Bottom line, the Cayenne E-Hybrid feels not only very quick in a straight one, but as sharp as any Cayenne in the twisty bits as well.

An impressive vehicle overall, this Cayenne E-Hybrid provides little insight into what we can expect from a similarly powered 911, but the advances Porsche has made with the Cayenne Hybrid’s powertrain shows promises for what else is to come from the company in terms of hybrid technology.

At £67,128 the Cayenne E-Hybrid costs a fraction less than the twin-turbo Cayenne V6 S (£68,330), yet it has more power, more torque, is faster and is massively cleaner and, according to the claims, more economical. It’s for these same reasons that some 75 per cent of all Panamera sales during the last 12 months have been of the hybrid model.

Other rivals at this price and space level include the Volvo XC90 T8 Twin Engine, BMW’s X5 xDrive 40e, the Audi Q7  e-tron and Jaguar’s new i-Pace. But none of these has a level of outright performance to trouble the Cayenne E-Hybrid, or the dynamic repertoire. At the moment, Porsche’s hybrid cars appear to be in a league of one.