The 2020 Porsche Cayman GTS 4.0 regains its flat-six and therefore top-billing in the class. It’s a brilliant package for those whom a GT4 is a bit too much 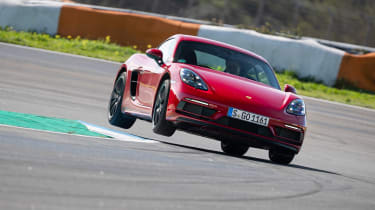 If the Cayman GT4 seemed like good value at 75 grand then the £64,088 GTS seems even more impressive, and is certainly even better value. It uses the same 4-litre flat-six engine and six-speed manual gearbox, rides on less focused but arguably more road-orientated tyres and suspension and costs just over 11 grand less. It also weighs 15kg less than the GT4.

So… just how good is the Cayman GTS to drive, and does it render the GT4 redundant? Or is there a little bit more to it than that?

The centrepiece of the GTS is inevitably its 4-litre flat-six engine. Porsche’s bean counters knew they couldn’t just use this engine in one car, and the GTS is the beneficiary. The only difference between its installation here and in the GT4 is the rev limit. In the GTS this is set at 7800rpm. In the GT4 it’s 8000rpm. But beyond that we really are talking about the exact same engine.

Where the Cayman GTS differs from the GT4 is in its chassis. And brakes. The GTS rides on conventional all-round wishbone suspension, albeit with Porsche’s PASM electronic dampers as standard, whereas the GT4’s front suspension is rose-jointed and features an additional anti-roll bar at the rear. As a result, the GTS’s chassis and suspension are not as focused as the GT4’s. 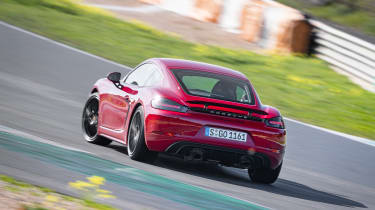 The Cayman GTS is also nowhere near as aerodynamically preened as the GT4, not just because it lacks the GT4’s rear wing but also because it doesn’t feature the underbody diffuser of the GT4. Result? The GT4 produces over 100kg more downforce than the GTS at 150mph and above. Whether you’d consider that an issue in the UK is, of course, up to the individual.

What’s more, the GTS is 15kg lighter than the GT4 so in a straight line it’s maybe just a touch quicker in the real world. The brakes are steel and slightly smaller than on the GT4 (hence the slight weight advantage), with carbon-ceramic rotors being an option at £5177. 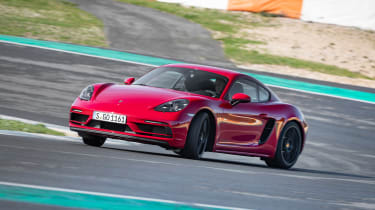 The six-speed manual gearbox is also the same as you get in the GT4, but with slightly longer throws. Even so, it’s a lovely gearbox, with the same auto blip function you get in the GT4, and the same long ratios in the lower gears. As in 80-plus mph in second gear, which feels a touch long on a track but works just fine on the public road.

Zero to 62mph takes 4.5sec according to Porsche (GT4 4.4sec) while top speed is 182mph (GT4 186mph). So again, we are not talking about big differences in terms of raw performance.

If you really lean on the GTS on turn-in and then load it up hard mid-corner, you can notice a difference in ultimate response between it and the GT4, especially the response from the front end initially. There’s also a bit less grip mid-corner simply because the GTS’s tyres are neither as wide nor as trick in their tread pattern and compound as the GT4’s; the GTS comes on regular P Zeros, the GT4 on Pilot Sport Cup 2s. But you need to be pushing very hard indeed to notice the differences, and if you specify the optional carbon-ceramic brake discs – as our test car wire – even the brakes of the GTS feel peerless, and every bit as strong as those of the fractionally heavier GT4.

And the engine and gearbox feel just about identical to the GT4’s as well. Same delicious noise, same slight absence of torque below 3000rpm but which then swells to an almighty conclusion beyond 5500rpm, same spine-tingling sensations over the final 800rpm, same brilliant six-speed manual gearbox, albeit with fractionally longer throws. Same car really, full stop. And given that the GT4 is our current car of the year, well, that says an awful lot about how good the GTS is, right there.

The Cayman GTS costs £64,088, and quite frankly it is an absolute bargain at that price. A BMW Z4 gets nowhere near it. Even an Audi R8 at almost twice the price can’t match it for excitement and/or thrills in many respects. If the GT4 felt like the best value sports car on sale at 75 grand, the GTS goes one better at 64 grand. To be clear, this car has no rivals at this price, and not many rivals at twice the price.