Weight counts against ultimate agility, but the Macan’s chassis is one of the best of any SUV 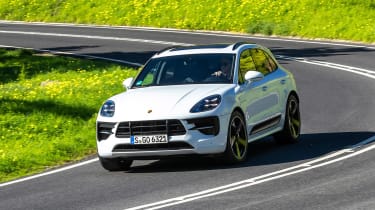 Of all the crossovers and performance SUVs we’ve driven, the Macan does the best job of disguising its size. At times, it feels not unlike a big hot hatch, doing a great job of delivering interaction and performance that you’d normally expect in a smaller car.

This is largely helped by the Macan’s steering, which is a cut above the competition’s. With plenty of weight and, crucially, some proper feel and interaction when you need it, it almost feels out of place in a five-seat 4x4.

Rather than opting for a super-light steering set-up, which many SUVs use in an attempt to hide their weight, Porsche has instead engineered a system that genuinely makes the car exciting to drive, but never leaves it feeling cumbersome or unwieldy. Combined with strong grip levels, you have the confidence to drive the Macan a lot harder than you would a conventional quick SUV.

Problems can arise, though, when the Macan simply can’t do any more to disguise its mass. That sharp front end and impressive traction can quickly melt into understeer should you overstep the Macan’s dynamic envelope. 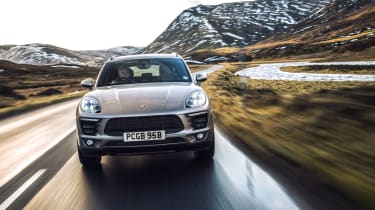 As for the ride, the steel-sprung PASM set-up (standard on the GTS and Turbo) is more than acceptable for daily driving when in its Comfort mode, but those expecting a softened-off luxury 4x4 may be slightly thrown by how much stiffer the Macan feels when in its Sport setting. In fact, if you want an SUV for wafting about in, you may find a Range Rover Velar an altogether more comfortable option. But those who want a more exciting drive will find the Porsche’s body control and stability a cut above.

Ultimately, though, the Macan feels like a balanced and well-executed performance SUV. Grip levels and outright pace are also very impressive, particularly in the Macan GTS and Turbo, which feel quick enough to easily stay with a properly sorted hot hatch.

The GTS is a particular highlight. It’s sharp – best driven in Sport+ virtually everywhere – and reactive, delivering decent feedback too through the weighty steering, and there’s a more interesting exhaust note with the occasional exhaust crackle. Given its weight, the clean steering response and impressive brake power and feel are particularly welcome. There’s even, if you’re brave and there’s plenty of space, the possibility for a little power oversteer.

There’s a sense that the car is ruthlessly bludgeoning the laws of physics into submission rather than deftly bending as a lighter car might, and we’d still opt for a lighter, lower car for genuine entertainment, but nonetheless it’s a deeply impressive display.