Replacement tyres for the Toyos on our Megane R26.R meant different handling characteristics. 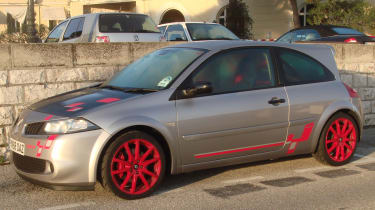 Come rain or shine (but mostly rain and occasionally snow) I’ve been driving around on trackday tyres for the last four months. As you may be aware, if you tick the roll cage option on the R26.R then Renaultsport kindly slips some Toyo R888 rubber onto the wheels – and the argh-triple-eight is basically a slick tyre with a few road-legalising squiggles etched in.

Shod thus, you might assume that the Mégane’s wet-weather abilities are limited. And you’d be right. Yet I still loved driving on the Toyos in the rain. Their outright limits may have been low, but their feel and the progression as they broke traction was actually very good. Yes, you had to think about and be happy with the car sliding, and yes, if you wear lead-soled shoes and welding gloves to drive then it would probably be terrifying, but if you enjoy a challenge there was a lot of satisfaction to be had.

But after 7000 miles the R888s were almost completely slick, so I have replaced them with some Dunlop Sport Maxx TTs (complete with Kevlar sidewall inserts, no less). I nearly had an embarrassing brand-new-tyres ‘moment’ on the roundabout outside Tyres Northampton as the shiny new rubber skated its way across the surface, but a few miles later they had scrubbed in. Initial impressions are that they’re much quieter, feel less planted in the dry but more grippy in the wet, and offer slightly less textural feedback through the steering wheel. Wet or dry, though, the GT3 RS of hatchbacks is still awesome.