Lack of luxuries can dissuade buyers, but dig deeper and the R26.R's rewarding in other areas 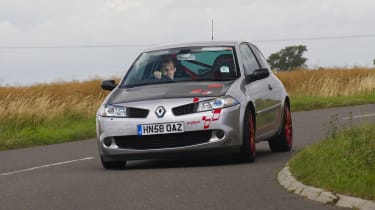 Henry’s role as road test editor is brilliant, because it means his Mégane is often left unattended in the car park while he’s off putting something else through its paces. It’s a situation I’m only too happy to rectify.

As someone who’s still a bit of a performance car novice, the R26.R makes it very easy to look (and feel) far handier, the highly communicative ride, precise steering and trick diff inspiring real confidence. Dashes to the shops for milk and crisps nearly always turn into maximum attacks on the long, twisty route back.

The engine’s great, too. Its strengths are easy to forget when put alongside the thunder-stealing chassis, but when you’re going for it, power is instant, lag-free and relentless, the 2-litre’s forced induction nigh-on undetectable. On a long motorway haul it takes on a different but equally admirable character, feeling more like a refined, torque-rich V6. 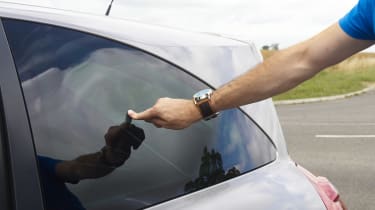 My friends have been left a bit baffled by the R26.R, though: those I have treated to a hot lap of the local back roads have come back impressed but seriously confused by the plastic windows and missing luxuries, refusing to believe that I’d spend my hypothetical 20-odd grand on one rather than a TT or a Scirocco.

It seems they’re not alone in being unsure about Renaultsport’s hardest: as I write, just 159 of the UK’s 230-car allocation have found homes. Five remain in the dealer network, while the rest are being re-exported back to Europe.

But then a recession doubtless takes the shine off a stripped-out two-seater hatchback. A poke around t’interweb reveals delivery-mileage cars are touching £20K – that’s a saving of four grand. It’s a discovery that’s led to designer Adam Shorrock and me formulating an elaborate plan to go halves on one. I’m only about, ooh, £10K short of my share…