Don’t write the LC500 off as just a blunt and comfortable cruiser, it’s as playful and as sharp as you need it to be

In real life, even more so than in pictures, the Lexus LC500 looks so otherworldly, yet elegant. With a grille like Predator’s mouth, a square footprint, smooth and high flanks, thin and sharp lights, and a low roofline, it’s more distinctive and exotic than almost anything you’ll find rolling out of European factories. With a gloriously unconventional drivetrain, for a modern car anyway, and almost unrivalled build quality it looks significantly undervalued at £76,595, too. But there are some flaws that mean it falls short of perfection.

Just having a naturally aspirated engine is different enough in the sea of turbocharged motors for the LC500 stand out. That its engine is a 5-litre 32-valve double overhead-cam V8 that produces 471bhp right at the top of its rev range, 7100rpm, really makes you pay attention.

Torque, as is often the case with any atmospheric motor, isn’t quite as impressive as a forced-induction engines, but the LC500’s 398lb ft that peaks at 4800rpm certainly seems adequate. However, Lexus has a trick up its sleeve so you’re never left wanting for the masses of low-down turbocharged torque, because the LC500 has Lexus’s own ten-speed automatic transmission. You have so many gears that you rarely crave any more grunt from the engine because you can compensate with the closely stacked multitude of ratios.

The power and plethora of gears help the rear-wheel drive LC500 accelerate from 0 to 62mph in a claimed 4.4sec, and onto a top speed of 168mph.

Other than optional rear-wheel steering and a rev counter that slides across the instrument binnacle, the LC500’s real technical highlights are its naturally aspirated V8 and its abundance of gear ratios, as mentioned above.

It does also have host of entertainment and safety systems, as you’d expect of a luxurious £75k plus car, but actually using them is so infuriating they might as well not be there. In the handful of days spent driving the Lexus, not once did I work out how to turn off the satnav after it had been programmed with a destination. I worked out how to change the endpoint and occasionally mute the guidance, but actually stopping the car directing me to a location seemed impossible. Not even reaching the destination satisfied the Lexus’s satnav.

Operating many of the on-board systems was like trying to complete a Crystal Maze mental challenge, where you have to complete a sequence of tasks in a specific order in an allocated time – a challenge made even trickier by the firm’s trademark hypersensitive trackpad interface.

Turning the traction control off – an essential task, but more of that later – took at least a day to work out. The traction control button has to be pressed for an excessive amount of time, and despite what the display on the dash says, it is only disabled if the car is actually stationery for the entire time the button is pressed.

The maddening toil that working the electronics in the LC500 are, however, almost completely forgotten about once you start driving it. The engine is, initially, the most notable aspect. Okay it doesn’t rev to 8 or 9000rpm as we’re getting used to from the small number of performance naturally aspirated units that are currently in production, but the ever changing tone and pitch of the V8 sucking in air as the revs, load and amount of throttle varies is as delightful as it is intoxicating. Compared to the RCF and GSF that share the same engine, the V8 is a little more gruff on start-up as valves in the exhaust open for maximum theatrical effect, but it’s nowhere near as over the top as a Jaguar F-type or anything from AMG. 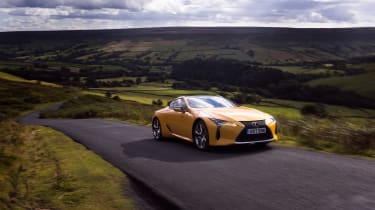 As well as the spectacular sound it makes, there are other benefits to its atmospherically fed motor, and that’s throttle response. Every little bit of pedal movement has an effect on forward thrust, and instantly. No matter which driving mode it’s in (Normal, Sport or Sport+) the accelerator is sharp, but not disproportionally loaded to the top of the pedal travel.

Both up and down shifts are swift and defined, too. A good job considering how often you want to swap between the 10 ratios; the wheel mounted, aluminium paddles are nicely weighted, solid-feeling and a pleasure to use. If you don’t wish to revel in the pleasure of changing gears yourself, the auto mode does a fine job when cruising but it doesn’t anticipate down changes sufficiently well to not be frustrating when you’re pressing on. Both Sport and Sport + driving modes do improve the transmission’s automatic behavior, but only subtly.

Just as with the engine, the driving modes don’t make a huge difference to how the chassis behaves. The ride is never luxury car-plush, with constant fidget on even the smoothest surfaces, but it’s far from uncomfortable. That said, the underlying firmness it somewhat at odds with the otherwise GT-like pretensions of the LC. Still, there is oodles of control, so any sense of harshness seems worth it. The LC500’s body feels impeccable strong too, with no hint of a quiver from the shell even over the most severe bumps. 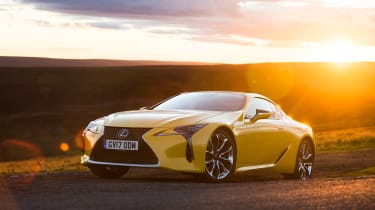 Despite the engine’s brilliance, it has to eventually play second fiddle to the way the Lexus behaves through a corner. The steering is light, so it’s easy to direct the nose where you want it. There’s just enough feel through the wheel for you to gauge how much lock to apply and there’s enough initial grip that it responds dutifully. Once you’re on the power there is a hint of understeer as the nose unloads, but it’s easily counteracted with the throttle if the traction control is disengaged. You can then use the exceptional control you have over the engine to push the back-end around, the tyres just about staying stuck to the tarmac or slightly over rotating – you choose. Every aspect of the car – the engine, the steering, the feel from the chassis – allows you to be so precise when it’s close to its limits that you have the ability to be neat and tidy, an absolute hooligan and everything in between.

With the driver assistance systems on, the LC500 can feel heavy and blunt – almost the exact opposite of what it’s like when the driver is fully in control. Where many modern performance cars, specifically turbocharged ones, rely on a series of increasing aggressive driving modes to add intensity and noise to a car’s character, the Lexus really changes depending on the driver’s inputs.

The 10-speed ‘box means there’s never only one gear appropriate for a corner. Choose the lower of the two or three that seem suitable, and the LC500 will retaliate with a more exuberant cornering style. Go higher, and it’ll rely on torque thrusting you out of a corner in a more efficient and just as fast manner. The chassis is capable of matching any of your ambitions, too. 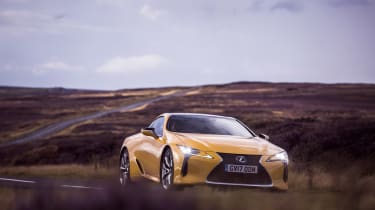 Then, as the majority of the engine noise you hear in the cabin is the luscious, rarefied sound of induction noise – which you only really hear with big throttle openings – the driver controls how loud it is with the accelerator pedal.

In short, the LC500 is a charismatic and engaging choice on the right roads, plus its refinement and lengthy kit list make it easy to live with. Only the firm ride undermines the experience, as it confuses the car’s character a little. It looks and feels like it should be a sporting GT, but it’s not quite comfortable enough. If the Comfort setting for the adaptive dampers could be softened off just a little, then the Lexus’ abilities would shine that bit brighter.

In its most basic form, the LC500 costs just £76,595. In the guise we tested it –with the Sport+ package, that comes with an adaptive rear wing, rear-wheel steering and 21-inch forged wheels – it costs £85,895. Now, I know that’s still a lot of money, but few cars offer the same levels of refinement as well as excitement for a similar price. That it also looks and feels so dramatic and special makes it very hard to beat, indeed. Then again, many cars have more complicated and better equipped infotainment systems, but are easy enough to operate and use. 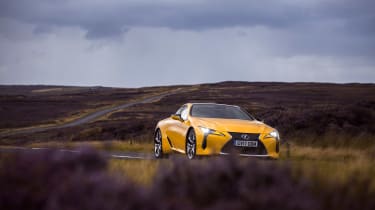 At those prices, the LC500 is right in the firing line of the Porsche 911; the Carrera is £77,891 and the Carrera S is £87,335. While even the S is less powerful than the Lexus, it still manages to better its 0-62mph time by 0.1sec – thanks, in part, to the additional traction from its rear-engined weight distribution. Both cars do admirably well at being GT cars while being suitably athletic when needed, but the lighter and more compact Porsche is more of a sports car when you’re in the mood for fun. Yet, there’s no denying the LC500’s V8 is far more pleasant to use and listen to than the turbocharged unit in the back of the Porsche and the cabin quality the Lexus is easily a match for that of the Porsche – although the 911’s layout and infotainment are far more user-friendly.

If it’s the Lexus’s engine that gets you most excited, and you desperately want a V8 you might consider the Jaguar F-type. The British GT is a little more expensive at £92,660 as well as being a little more powerful with 542bhp, but it has no rear seats, feel far cheaper than the Lexus inside and its engine seriously lacks finesse.

Don’t discount the Aston Martin V8 Vantage, too. It might be quite old now, but thanks to stunning good looks it’s the only sub-£80k car that can match the LC500 for presence. It’s lacking some firepower compared to its rivals, but the Aston’s atmospheric V8 and approachable chassis means it is eminently loveable.