Jaguar XE P300 R-Dynamics S AWD review - how does it compare to the Giulia Veloce? 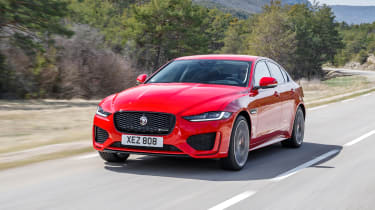 Jaguar’s treatment of emerging SUV and EV trends might be grabbing the headlines and making the case for a secure future but delivering a convincing alternative to the BMW 3-series/Merc C-class/Audi A4 compact exec hegemony, while less critical for the balance sheet, is something the company instinctively feels it should be able to crack.

The original 2015 XE had a serious go but, despite numerous assets, could hardly claim to have nailed its mission. The trimmed-back, facelifted and fettled 2020 model year XE line-up looks much more like it and this range-topping P300 R-Dynamic S AWD – on paper at least and granted a few choice options – appears to have the tools to dismantle enough of that meticulously engineered Teutonic shield to properly shake things up.

The XE’s previous six-strong engine line-up has slimmed down to just three 2-litre Ingenium units – two petrol and one diesel. For our P300 R-Dynamic S AWD, the more powerful of the turbocharged four-cylinder petrol motors and eight-speed auto are carried over from the superseded 300 Sport, the engine developing 296bhp and 295lb ft. With a 0-62mph time of 5.7sec and top speed limited to 155mph, it’s quick enough to hold its own with sector/price rivals. 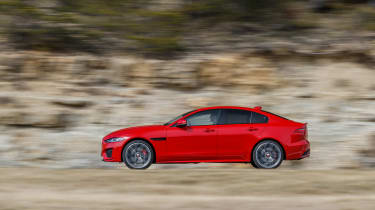 As before, Jaguar’s torque-on-demand all-wheel-drive system and Intelligent Driveline Dynamics tech seek to blend a rear-drive feel with all-weather 4WD traction. The IDD modes allow the driver to choose Comfort or Dynamic settings for engine, gearbox and steering via the central touchscreen, and mix them up to taste.

As before, aluminium accounts for 75 per cent of the body, and suspension is by double wishbones at the front and integral link at the rear. If little has changed mechanically, perceptually this is a classier, sharper-dressed XE. Jaguar’s design chief Ian Callum has reached into his bag of stylistic licks to make the car look lower, wider and more purposeful without actually changing any of the exterior dimensions. Thinner headlights, larger air ducts and reshaped bumpers do the trick at the front, while subtly reworked tail lamps (like the headlights, LED) and a refashioned bumper help make the tail look more distinctive.

Climbing inside, the news is better still with a major hike in perceived quality thanks to many more soft-touch surfaces, upgraded veneers, a greater sense of flow between the facia’s elements, that smarter, more traditional-looking centre console, a stylish, dished steering wheel lifted from the I-Pace SUV, a crisp digital instrument display and, again taking its cue from the I-Pace, a double-deck ‘Touch Pro Duo’ infotainment system. 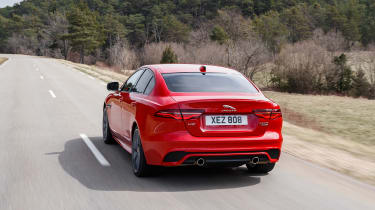 A slightly bluff throttle response and the XE’s overarching refinement can pull the plug on performance-related excitement, but there’s no denying the potent partnership the powertrain strikes up with the brilliant all-drive chassis.

Point to point on a road as exercising as the N85 (Route Napoleon) in the south of France, the XE P300 R-Dynamic S AWD is both rapid and rewarding – fluent and agile, with the kind of body control and grip margins you can exploit, and a ride, even on the optional 20-inch alloys, that flows over broken surfaces and awkward cambers with remarkable equanimity. Just as impressive are brakes that don’t wave the white flag after the first mountain descent. All right, the steering has no genuine feel to speak of – think centre-weighted linear resistance – but it is direct, accurate and not as synthetic as some electric systems.

Model for model, Jaguar has shaved around £1700 from the price of the XE for the latest line-up. At £41,005, the all-wheel-drive version of the P300 R Dynamic looks to be particularly keen value – as it probably needs to be to take on rivals as talented as BMW’s 330i M Sport and the Alfa Romeo Giulia Veloce.