Vauxhall’s brawny VXR8 is a lot of car for the money, but is BMW’s 335i the smarter choice? 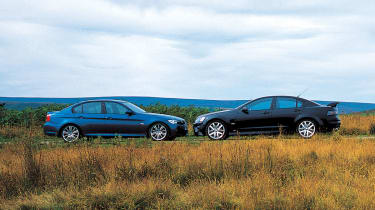 'How big is the engine?’ asks the filling station attendant. He nods appreciatively when I tell him it’s six litres and delivers over 400bhp. This is the third time today I’ve answered this question and it makes me think that maybe Vauxhall has cracked it this time.

The previous Griffin-badged Holden, the Monaro, didn’t attract this much attention, even though the 6.0 VXR version had a near-identical outsize V8 and a similar bargain price. But the value of that softly styled and rather impractical coupe was much less easy to grasp than that of the new VXR8. This is a BMW M5-style saloon for 335i money.

And on the other side of the pumps sits an M Sport 335i, although it appears not to exist in the company of the big black Vauxhall because, as well as being built on a larger scale, the VXR8’s slightly menacing looks hoover up all the attention. In profile there’s a hint of Lotus Carlton about it, but its best angle is almost dead-on rear, the muscularity suggested by its tall rump enhanced by the glimpse of swollen wheelarches and the glint of 19in alloys down its flank. At the outset, some 200 miles south of this petrol station on the edge of the North York Moors, it seemed likely that the BMW would see a lot of the Vauxhall’s rear end, mostly as it disappeared from view, but it hasn’t worked out like that. Improvements in the efficiency of the Corvette LS2 V8 have lifted its output from the 398bhp of the Monaro to 411bhp, yet with just half its engine capacity the little BMW has proved as difficult to shake off as warm chewing gum on a plimsoll.

We’ve taken the scenic route, naturally, which you’d expect to play more to the strengths of the BMW with its lesser bulk and greater agility, but it has been as much the 335i’s remarkable twin-turbo straight-six that has kept it in touch. With a small turbo for instant response at low engine speeds and a larger one for strong boost at the top end, the 302bhp engine feels naturally aspirated and at least a litre bigger than its 2979cc.

Just as unexpected, though, for anyone who’s spent time in Monaros, is the more European flavour of the VXR8. It’s evident from the moment you settle behind the wheel. Better quality switchgear, styling and materials plus better shaped seats enhance its appeal, the only ergonomic fumbles being the over-designed handbrake and the fact that the wiper and indicator stalks are transposed. More significantly, this more European tailoring extends to the dynamics. In the Monaro there was a sense that the wheels and the suspension components were heavy duty and rather softly located. The chassis of the VXR8, meanwhile, feels crisper and more responsive, with less pitch and yaw and a taut, smooth ride on A-roads.

The one area where the VXR8 takes a backward step is noise, specifically the lack of it from the engine. I reckon the V8 is more muted than those from Audi, BMW, Jaguar and Mercedes (we’d certainly recommend the Walkinshaw Performance sports exhaust).There’s nothing apologetic about its delivery, though, which is instantaneous, beefy and insistent. The lighter BMW may offer surprisingly similar pace, but there’s something more dramatic about a big, powerful engine getting its shoulder behind a heavy car and urging it up the road. It lends the acceleration a satisfying, epic quality, though a suitably thunderous soundtrack would make it even more memorable. As with the Monaro, the gearing is long (about 40mph per 1000rpm in top) but the shift is a bit snappier and the clutch light and easy.

Step from the Vauxhall into the BMW and you’re clearly in a smaller car. It’s not cramped, just a little less airy, while its design and materials don’t set it above the VXR8. The straight-six sounds gorgeous, crooning with a rich timbre at idle, and it revs more smoothly and higher, redlining at 7000rpm. The short-throw shift of the six-speed ’box makes it a joy to snap between ratios too; the VXR8’s gearchange feels a touch ponderous in comparison.

If anything, the ride of the BMW is more tightly controlled yet more compliant than the Vauxhall’s, which is a bit of a result given that its Bridgestone Potenza RE050As are run-flats. Experience has shown that the 3-series is much less agitated by run-flats than the 1-series and Z4, but still every so often the 335i encounters the wrong sort of bump and the calmness is shattered.

Even so, dynamically it’s the BMW that’s ahead on points when the roads get more challenging. According to John Hayman, following in the Vauxhall, the back end of the BMW looks a bit ragged when the road gets nadgety. I’m surprised to hear this because the 335i feels superb under pressure, its front end delivering terrific turn-in bite and holding the line resolutely. A bit more steering feel would be welcome, and the traction control is rather busy mid-corner if the throttle is pinned too early, but the poise and grip of the chassis are impressive, while the firm lateral support offered by the seats enhances the sensation of control.

Over the same stretch of testing asphalt the Vauxhall feels a little less composed and comfortable. It’s nothing to do with its size or the power that its rear tyres have to cope with, it’s not even an issue of grip, of which it has an abundance. No, it’s all in the detail. Earlier in the trip there was the feeling that the damping was having a couple of bites at controlling the wheels over some quick-fire bumps. This road occasionally elicits the same response and, when it does so on turn-in, it takes the edge off your confidence, especially as the steering, which is firmly weighted on-centre, feels a fraction light and lacks feel on lock. As Hayman says, the cornering force feels like it’s generated by the tyres rather than mechanical grip; he even wondered if perhaps it had a duff nearside front shock absorber.

On the upside, if you’re a fan of oversteer, the VXR8 will oblige in a manner that the 335i seems incapable of. Disable traction control, get the nose hooked into a tight corner on a trailing throttle to lighten the tail, then nail the throttle. The limited-slip diff spins up both fat Bridgestones, you wind on opposite lock and some yards later the slide peters out quite gently.

Despite its power, the 335i resisted all attempts to get it out of shape, refusing to slip more than a few degrees out of line, even with DTC fully disengaged. Most drivers will appreciate this benign nature, because it makes pretty similar speeds between the corners and encourages you to carry more speed in. Indeed, the more pressure you put the 335i under, the more impressive it feels. Off the main routes that border the moors there are some wicked roads, ribbons of tarmac that drop and turn unexpectedly, and the composure of the 335i, most notably its front-end response and bite, never desert it.

It doesn’t look much for £34K though, does it? A 318i driver will be able to spot the M Sport wheels and lower suspension, the deeper front apron and twin-pipe rear valance, but to most people it will look like just another 3-series. Anyone who thinks this is no bad thing wouldn’t consider a VXR8, even at just £35K. The Vauxhall is an old-school super-saloon, big and a bit lairy, the Lotus Carlton remade, or perhaps a four-door TVR.

The 335i is the better drivers’ car, but that was odds-on from the start. Thing is, the VXR8 isn’t far behind, and could be much closer with better damping. In a number of respects it’s a much more appealing proposition than the Monaro: it feels every bit as quick, it’s easier to handle, and with four doors and five seats it’s a darn sight more useful, which alone should make it a bigger sales success for Vauxhall. But it really should sound better. At 18mpg I’d want to hear my money spewing from the tailpipes. And those curious bystanders at the pumps should be shaken as the VXR8 rumbles away from the forecourt…