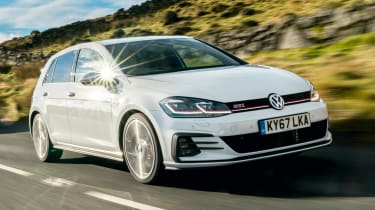 Volkswagen has updated the Mk7 Golf range, including the performance models, but in the finest tradition of the company’s venerable hatchback steady evolution and not revolution is the order of the day.

The Golf GTI gets a little more power and in line with the rest of the range, the very mildest of cosmetic facelifts, too. LED head and taillights are now standard fit and there are new bumpers and a revised front grille, while the forward facing radar has been relocated from the front intake to a much more discreet position behind the VW badge.

The 2-litre, four-cylinder turbo engine has been tweaked to deliver another 10bhp in the entry-level GTI, lifting peak power to 227bhp. The GTI Performance model, which has bigger brakes and a limited slip differential, now delivers 242bhp. 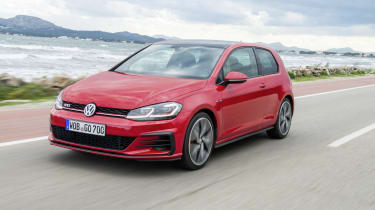 The six-speed manual gearbox is carried over and the twin-clutch DSG transmission is still available. VW quotes a 0-62mph time of 6.4 seconds for the base GTI and a 155mph top speed.

There are no major mechanical revisions, but a raft of driver assistance systems and infotainment technologies have been introduced. The touchscreens are all larger now, with the optional Discover Pro version now featuring a vast 9.2-inch display. That means the icons are bigger than before which makes them easier to tap when on the move, but the deletion of the rotary knobs for volume and map zoom control is a backwards step.

Discover Pro also features a gesture control function, which allows the driver to shuffle through various menus and perform basic tasks by swiping a hand across the face of the screen. The revised Golf is the first compact car to offer this function, but as is so often the case with these gesture control systems a decent touchscreen is simpler and easier to operate. 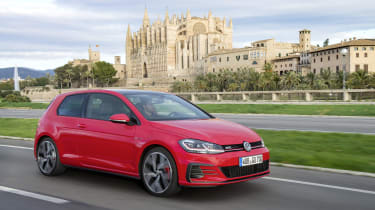 Another new option is the Active Info Display, a 12.3-inch screen that replaces the traditional dials and gauges in the instrument binnacle. It takes time to learn to navigate its various displays and functions, but it soon becomes a useful and intuitive display.

> Read our review of the Audi S3

Beyond that, a range of connectivity functions have also been introduced above and beyond the now familiar Apple CarPlay and Android Auto, such as DoorBird, which connects the car to the owner’s home video door intercom system. This allows the driver to communicate over video with anybody who rings the doorbell, and even allows him or her to unlock the front door remotely.

On the driver assistance side Traffic Jam Assist, only available on cars with DSG, is a semi-autonomous function that accelerates, brakes and steers the car in slow moving traffic. The usual automated emergency braking and hazard warning systems are also present.

This Mk7.5 Golf GTI drives exactly the same as the previous version, which means it’s perhaps the most refined and civilised hot hatch on sale. It’s also very competent on back roads without being truly thrilling in the manner of the Renaultsport Megane or the, admittedly more expensive, Ford Focus RS.

Equipped with VW's adaptive dampers (called Dynamic Chassis Control) there’s a suppleness to the GTI's ride quality that makes it an effortless day-to-day and long distance machine. Even in the normal damper mode there’s enough control and precision that you can really commit to a twisting road.

The Bridgestone Potenza S001 tyres find decent grip in the dry and they perform impressively well in the wet, too, which suits the GTI’s all-rounder skillset. Keen drivers would do well to specify the Performance package, which adds a mechanical LSD. Without it, the GTI can feel scruffy and unsettled away from second gear corners, even in the dry. 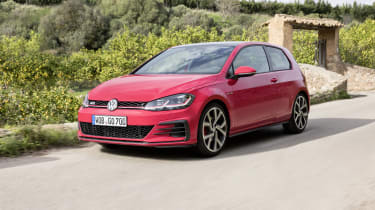 The steering is crisp and direct, giving a clear sense of connection to the front axle, which helps you to easily find the limit of grip. When that limit does arrive, the GTI is very secure and forgiving. In fact, it’s that total, boundless stability that makes the Golf such an effortless car to drive quickly, but it also means the GTI doesn’t deliver the same degree of excitement that a more aggressive hot hatch can serve up.

On paper the GTI is way down on power compared to several of its rivals, but in truth 227bhp is enough to make this car feel very rapid in a straight line. The engine is responsive and torquey, and although it revs well to 5500rpm it feels a touch strangled beyond that point. The more potent versions of this engine are much livelier at the top end.

> Read our review of the Volkswagen Golf GTI Clubsport S

VW’s six-speed DSG gearbox works really well in the GTI. The manual transmission is perhaps a more natural partner for a hot hatch, although the shift action can be a notchy at times. Heel and toeing is very difficult to get right, meanwhile, because the brake pedal is soft and over-servoed.

Starting at £27,865 the Golf GTI sits right between the £22,950 Ford Focus ST and the £31,250 Focus RS. The Golf has the ST covered in just about every area, but the RS is a more exciting car to drive on a winding stretch of road. Peugeot’s 308 GTi shouldn’t be overlooked – at £29,335 it’s priced similarly to the Golf GTI, and although it doesn’t have the VW’s all-round ability it is more thrilling right at the limit.