The new Aston Martin Vantage S fights Ferrari, Porsche and Mercedes as a 205mph supercar. And it's a cracker 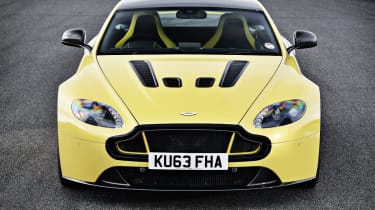 The Aston Martin V12 Vantage S, a replacement for the V12 Vantage that’s been on sale since 2009, but as its name suggests, there’s a sportier edge to it second time around.

On the right day and on the right road, this remains one of the most entertaining cars on the planet. Because although its basic design might be nearing the end of its first decade, the V12 S stands as glorious proof that Aston’s evolutionary approach really does let the company punch well above the weight its modest development budgets should earn it.

And don’t forget that the standard V12 Vantage has always been pretty much our favourite contemporary Aston: lighter and more lithe than the Vanquish while sharing the same sublime engine. The fact the V12 came only with a manual gearbox merely heightened its appeal.

Which is where the new ‘S’ is different, of course: more power, a sharper dynamic focus when you really up the pace, and the sole transmission option of Aston’s single-clutch ‘Speedtronic’ automated shifter, now re-engineered to deal with the V12’s output. Despite the more expensive gearbox, the price rises little, at £138,000. See it compete in our 2013 Car of the Year contest here.

A quick glance at the spec sheet, or indeed in the cabin, reveals that the biggest change over the (now discontinued) non-S is the switch from a manual to Aston’s seven-speed single-clutch paddle-shift gearbox. This is the first time that Aston has managed to hook the Sportshift ’box up to its 5.9-litre V12 and it has required a switch from a single- to a twin-plate clutch robust enough to handle all the V12’s torque. Talking of which, the torque figure for the S has improved 37lb ft on the regular V12 Vantage to 457lb ft at 5750rpm, while power is up 55bhp to 565bhp at 6750rpm.

Perhaps just as impressively, low-revs torque (measured at 1000rpm) has risen by 52lb ft from an already hearty 324lb ft to a thumping 376. However, there’s an argument that this increase in basement shove could be counterproductive. One of the reasons why the standard V12 Vantage’s claimed 0-60 time was a slightly disappointing 4.1 seconds (and why we could only manage 4.4sec when we tested it) was that it was simply too tricky to translate the torque to the tarmac without a lot of wasteful wheelspin. But the chaps at Aston must have managed to significantly improve rear grip because the claimed 0-60mph time has dropped by more than you’d expect from the power gains and gearbox change alone. The V12 Vantage S will apparently hit 60 from a standstill in 3.7sec (and complete 0-62mph in 3.9), and it will go on to reach a 205mph top speed. The only Aston road car that bests these figures is the mighty Aston Martin One-77.

We are big fans of the original, but the S is much more nailed down in the corners and revs more freely whilst still retaining that big-hearted character of the earlier car. The ZF Servotronic steering has a quicker rack (15:1 down from 17:1) but also has variable assistance. Thankfully you don’t notice the variable assistance and there’s always a pleasing weight to it.

The seven-speed Oerlikon Graziano gearbox is trickier to get used to. We obviously miss having three pedals and the added interaction that gave in the old V12 – we’d happily forfeit the 25kg weight saving the paddle-shift transmission provides to have it back. The paddle-shift is not the swiftest or most modern-feeling system, either. Curiously, the downshifts are brilliant – the ’box never once refused a request and always delivered smoothly with a pleasingly dramatic flare of revs. It’s the upshifts that are the problem. When you’re going for it and changing up at high revs, the shifts bang through quickly, but if you short-shift or want to drive at less than nine-tenths, the response is awkward and the torque interruption too long compared to most current systems. Having said that, we got used to it over one day, and you doubtless would too if you owned one. If you don’t want to drive flat-out, you can work with it by lifting off the throttle as you pull the right-hand paddle, or better still just not changing gear as much and instead leaning more heavily on the huge well of torque provided by the engine.

There’s no doubt that the V12 Vantage S is the best car Aston currently makes. In spite of the gearbox, or ironically perhaps partly because of it, the S has quite an old-school analogue flavour, certainly more so than something like a Ferrari F12. And despite tech like adaptive dampers, a Sport mode and Servotronic steering, there’s an unfussy mechanical honesty that shines through in the way the short-wheelbase, front-engined (big-engined), rear-wheel-drive layout engages and encourages you to attack the road. The plate-type limited-slip differential isn’t particularly fancy, but it is predictable and trustworthy, which is what you want when the DSC is all the way off. It locks and stays locked to let you happily steer the car on the throttle and tattoo a pair of black lines onto the tar in your wake.

With 565bhp the Aston V12 Vantage S rivals the Ferrari 458 Italia and Mercedes SLS AMG GT, though its £138,000 price tag is something of a minor bargain compared to them, sitting closer to the new £140k Porsche 911 Turbo S. The V12 Vantage S’s technology isn’t as slick as any of them, but it is perhaps the most charismatic of the bunch and we’d argue the prettiest.

It’s the combination of pace and grace that makes the Aston feel so special: a devastating full-attack mode (accompanied by what remains one of the best soundtracks in the business) combined with ultra-comfortable cruising. It’s old, but it’s definitely still game.

And can you think of another car that manages to still look this good, and this fresh, after nearly a decade of exposure?