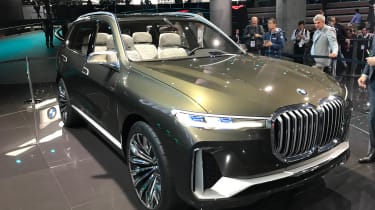 BMW announced its intention to produce an even larger, more luxurious, ‘Sports Activity Vehicle’ to take on the likes of Bentley’s Bentayga and the Range Rover Autobiography some time ago and it’s now been revealed prior to its debut at the Frankfurt motor show. As with BMW’s most recent new model reveals – such as the 8-series and the Z4 Roadster – the X7 is being shown in Concept form, this time under the company’s hybrid iPerformance moniker.

We’re yet to see the X7 in the flesh and BMW hasn’t revealed its dimensions (other than that it rides on 23-inch rims) but it appears to be a hugely imposing machine and there’s no doubt that its most controversial element are those enormous kidney grilles which for the X7 seem to have taken on almost comedy-like proportions. The size of the kidneys is exacerbated by the slim design of the BMW laser light headlights that flank the grilles while the large air-intakes under each light give the X7 a distinctive look.

> Click here for our review of the Range Rover Velar

Straight-edged chrome adorns those air intakes and this theme continues along the X7’s flanks with a similar chrome surround to the air breathers aft of the front wheels which then extends along the sills and on to the rear valance before ending in another vertical surround to the rear bumper air outlets. The rear of the X7 is perhaps its most conventional aspect sporting typical BMW design elements along with BMW’s latest slim LED lights. 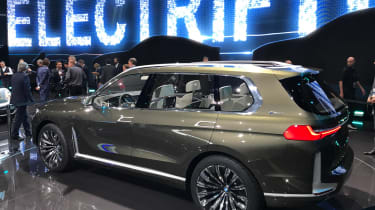 While BMW has yet to release full details of the X7’s powertrain other than it will feature a TwinPower turbo petrol engine allied with its eDrive technology, but we can assume this will be the 740e’s 2-litre set up with a combined output of 322bhp and the ability to travel up to around 20 miles on electric power alone. As befits the X7’s luxury bent no doubt other engines will be available including the 3-litre diesel and the company’s 4.4-litre twin-turbo V8. Given the X7’s size there’s also the possibility of an M Performance variant using the mighty twin-turbo V12 from the M760Li xDrive.

It’s inside the X7 that BMW’s new take on luxury comes to the fore and it says the interior offers an ‘experience unmatched by any BMW past or present’. There are plenty of elements seen in both the Concept 8-series and the Concept Z4 such as the new 12.3-inch instrument cluster screen and central touchscreen information display and siting of the major controls in separate islands.

There are six seats, finished in dark olive-bronze and smoke white leather in the concept, while the dash itself is finished in open-pore ash in combination with matt and polished aluminium elements. The seats are arranged in three pairs and thanks to a rear seat entertainment system passengers will ‘have access to highly personalised digital services’ which they can share with others on board. Ensuring the X7’s cabin is light and airy is a panoramic glass roof that stretches across the entire roof and appears to be anchored to the car with a Y-shaped structure. 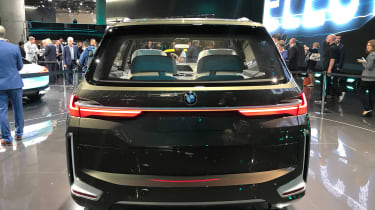 With the arrival of the X7 BMW has also announced new branding for what it refers to as its expanded luxury segment which will include the current 7-series and i8 and soon to be launched 8-series, X7 and i8 Roadster. These elite models will have a new black and white version of the iconic BMW roundel with the company’s full name, Bayerische Motoren Werke, written out in full.

The luxury SUV segment is set to grow in the coming years and the X7 looks to have the luxury part of the equation nailed on, only time will tell if the production version will continue with the challenging kidney grilles or whether they will be toned down when the car goes on sale in 2018.