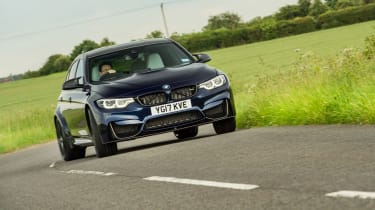 One consolation for the loss of the E92 M3’s screaming naturally aspirated V8 engine was the sheer performance of its forced induction replacement. The F80’s 3-litre twin-turbocharged straight-six revs to a relatively high (for a modern turbo engine) 7300rpm, but rather than just being able to reach those elevated RPM figures, the engine gets more and more intense as the revs pile on. It makes for a great engine to wring out, with every additional RPM making the engine ever more exciting rather than losing momentum at the top of the rpm range.

One element that isn’t quite as blissful is the way it sounds. It may be an M Division straight-six, but you’d never really guess it, instead there’s an industrial rumble from the exhaust with an extra burp at the gear change, the sort that’s now seemingly obligatory on turbocharged performance cars. The engine note is also supplemented by a synthetic growl that emanates from the speakers, and although it's not unpleasant, it lacks authenticity. 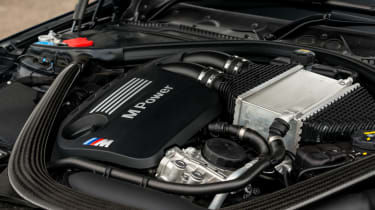 Cars with the Competition Package may have more power, but the engine behaves in much the same way as the standard M3’s, with great throttle response and a punchy top end. The M3 comes with the option of two transmissions, a six-speed manual or BMW’s DCT, a seven-speed twin-clutch automated manual. The speed of the gear changes from the dual-clutch transmission is practically faultless, and you can leave your up-changes right to the red line without the worry of stumbling into the limiter. But although the shifts are fast, each up-shift is accompanied by a sudden jolt of torque. So, rather than a smooth seamless swapping of cogs, a pull of the right hand paddle can result in an extra thump in your back and the rear wheels losing traction. It means you have to be very careful when you choose to change gear; for example, it would be unwise to go for a higher gear mid-corner with the traction control off, even if the road was perfectly dry and warm. 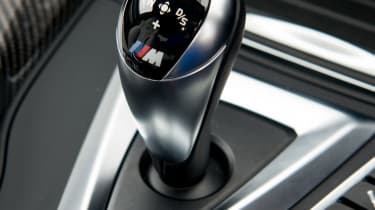 The DCT gearbox is a £2495 option while the six-speed manual comes as standard. Unfortunately the latter is not a very popular choice, despite its more authentic driving experience. As such, the only time we’ve had opportunity to try the M3’s engine with the manual was in AC Schnitzer’s ACL2. The 2-series based car used the more traditional transmission because it’s 25kg lighter than the DCT, but the greater benefit comes from the extra control it grants the driver. Feeding in the clutch at the rate that you consider acceptable, rather than abrupt nature of the DCT ‘box, means you can enjoy the drivetrain significantly more. And, even though the ACL2 has 137bhp more power than the M3, the manual gearbox actually makes it a more approachable car to drive.